It's a been a long day for the state of Louisiana on July 13 after Barry made landfall. Widespread flooding has plagued much of the state including Morgan City.

While Barry will continue to weaken, the risk for major flooding will remain as up to 2 feet of rain is expected to inundate parts of the lower Mississippi Valley into Monday.

Power outages topped 150,000 in Louisiana alone during the early morning hours of Sunday. 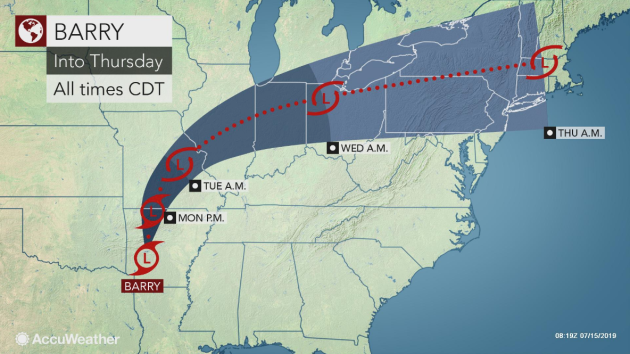 The risk for storm surge flooding has diminished, and any additional wind damage will be limited to a few communities as Barry continues to lose wind strength into Monday. Barry became a tropical depression Sunday afternoon over northwestern Louisiana and is expected to become a tropical rainstorm by Monday.

Regardless of the official designation on the Saffir-Simpson scale, AccuWeather declared Barry a level 2 storm on its RealImpact™ Scale for Hurricanes. The scale ranges from "Less than 1" to "5," with 5 having the most severe impact.

"Our greatest concern is for torrential rain that would result in life-threatening flooding," AccuWeather Hurricane Expert Dan Kottlowski said. 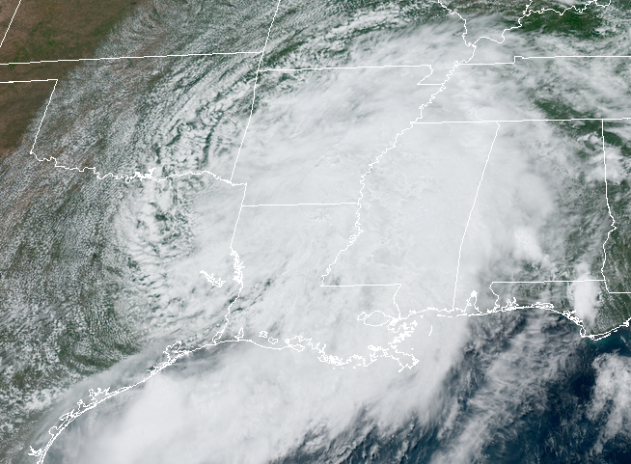 Barry was seen encompassing the lower Mississippi Valley in this satellite image on Sunday, July 14, 2019. (RAMMB)

Lives and property will continue to be threatened as Barry spreads bands of heavy rain across Louisiana, Mississippi and eastern Arkansas into Monday.

Rainfall totals can average 6-12 inches in most communities from Louisiana and Mississippi to Arkansas, southeastern Missouri and western Tennessee.

In the hardest-hit areas, there can be an AccuWeather Local StormMax™ of 24 inches can still be achieved. 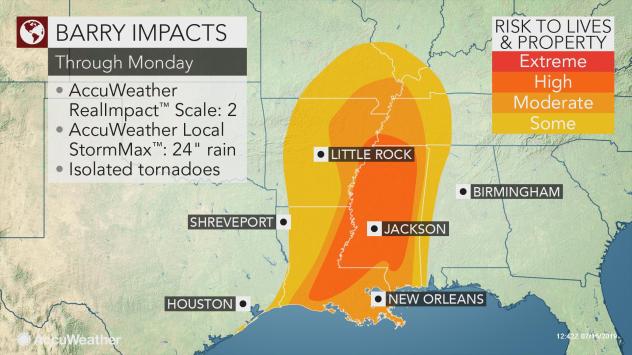 Into Monday night, there will continue to be slow-moving bands of heavy rain that can result in a fire hose-effect. In these bands, rainfall rates of 2-4 inches per hour can occur, which could quickly cause low-lying and poor-drainage areas to become inundated and small streams to rise out of their banks. Rainfall in some of the bands has exceeded 15 inches based on radar.

Repeating downpours inundated Concordia Parish, Louisiana, during Monday morning. There have been multiple reports of water over roads. In some cases, water was a few feet deep,

Heavy rain and the risk for some flooding will also gradually spread northeastward over the lower Ohio Valley into midweek.

Additional isolated tornadoes may be produced east of Barry's track. Some of these may be wrapped in rain and difficult to see until they are already in the neighborhood.

These dangers may occur well away from the center of Barry, as was evident by the thunderstorms that were capable of producing tornadoes near the border of Mississippi and Alabama on Sunday.

Streets, highways and low-lying areas are the first to take on water as torrential rain pours down. However, flooding will progress and expand as the storm moves slowly inland. 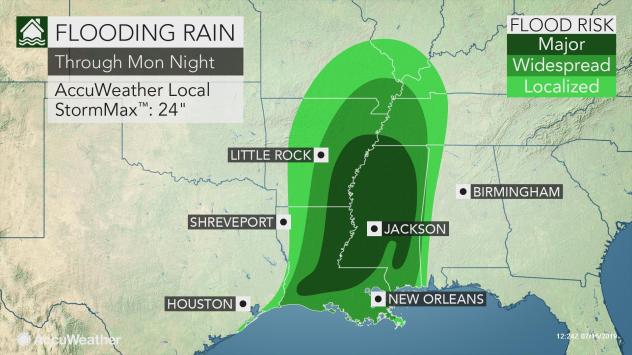 Flood waters have over-topped levees in parts of southern Louisiana, but fears of that happening in New Orleans have eased.

Downpours that occurred in New Orleans in the early stages of Barry's formation were not repeated during the height of the storm over the city.

Earlier last week, NWS hydrologists expected the Mississippi River at New Orleans to crest at 20 feet in the event that water was pushed up the river from the Gulf of Mexico. The river crested around 17 feet on Friday but has since fallen to near 16 feet as of Monday morning.

Significant rises on the secondary rivers in the region will occur or are expected this week, including on the Vermilion, Pearl, Amite, Big Black and Yalobusha. Some of these rivers can continue to rise through this week, even after Barry's rain has stopped pouring down.

However, the lower Mississippi River is not anticipated to rise much more from its current level.

Many secondary rivers in the delta region, below the Arkansas River, generally do not contribute to the flow of the Mississippi, but rather take water away from the main stem. So rain that fell from Barry in this lower portion will not greatly affect the level of the Mississippi.

In general, the Mississippi River has been slowly receding in recent weeks after several rounds of torrential rain and melting snow from this past winter and early spring caused widespread flooding.

The main impacts on the Mississippi River from Barry in the coming few weeks will be to delay when the river finally returns to its banks.

Runoff from the torrential rain falling during Barry north of the Arkansas River junction drains into the Mississippi. A significant amount of rain will fall on the middle portion of the Mississippi through the middle of this week. It will take a while for that surge to work downstream in the large meandering waterway that traverses nearly flat terrain.

It is possible that the lower Mississippi River may not recede below flood stage until the end of the summer, further prolonging what is already the longest flood event on record at Baton Rouge, Louisiana.

The river rose above flood stage on Jan. 6 and has not dropped below that mark since. 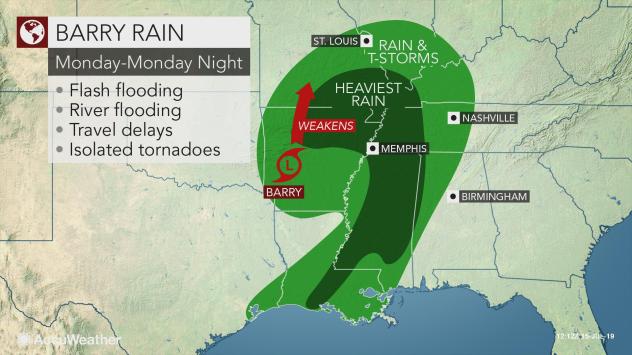 In comparison, the level on the Mississippi River prior to the arrival of Hurricane Katrina was 2 feet. On Thursday morning, the river level was just above 16 feet. Flooding in New Orleans during Katrina occurred primarily as levees failed when a storm surge caused waters to rise in Lake Pontchartrain.

While there can be an isolated shower or thunderstorm that briefly forces those working outdoors to seek shelter, drier weather will be welcome across Louisiana and Mississippi this week, starting on Tuesday when Barry focuses on the Ohio Valley.

Downpours can still cause trouble in terms of flash flooding farther north in portions of Arkansas and western Tennessee into midweek.

However, humid and seasonably hot weather will put those engaging in storm cleanup operations or without power at risk for heat-related illnesses. It may take days for power to be fully restored across the region. 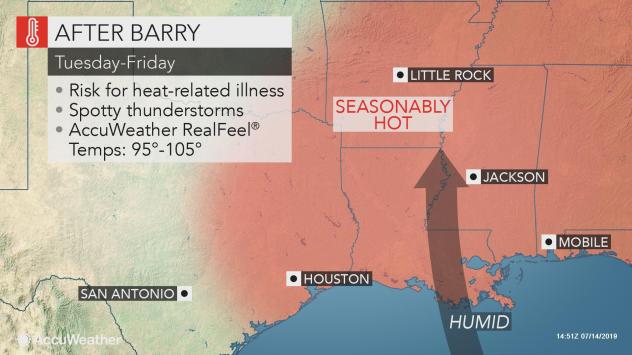 AccuWeather RealFeel® Temperatures can approach or exceed 100 daily this week during the midday and afternoon hours. There will be little relief at night when these values may not drop below the 80s.

Download the free AccuWeather app to stay alert to any tropical advisories, watches and warnings. Keep checking back for updates on AccuWeather.com and stay tuned to the AccuWeather Network on DirecTV, Frontier and Verizon Fios.