Tropical disturbance in Caribbean may strengthen prior to approaching Florida

Floodwaters poured over river banks in Naguabo, Puerto Rico, on Tuesday after a tropical wave swept through the Caribbean. AccuWeather forecasters say the tropical system may bring heavy rain to parts of the Southeast later in the week.

A tropical disturbance that has been drifting over the Caribbean since this past weekend is forecast to drift northwestward toward Florida and may gather some strength along the way this week.

The greatest threat from the feature along its path is likely to be from flooding downpours. 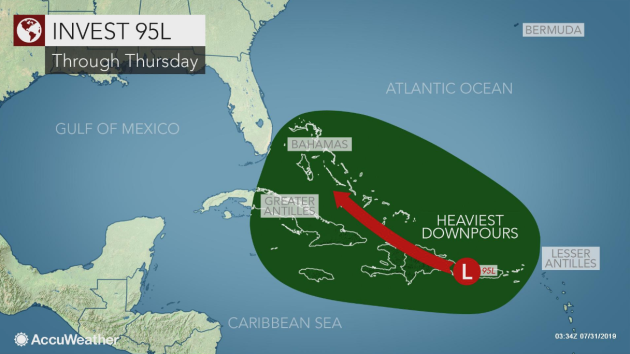 The disturbance, which is also referred to as a tropical wave in the weather community, has a small chance to become the fourth tropical depression of the 2019 Atlantic hurricane season.

"Waters are sufficiently warm for tropical development in the Caribbean," according to AccuWeather Meteorologist Brett Rathbun. 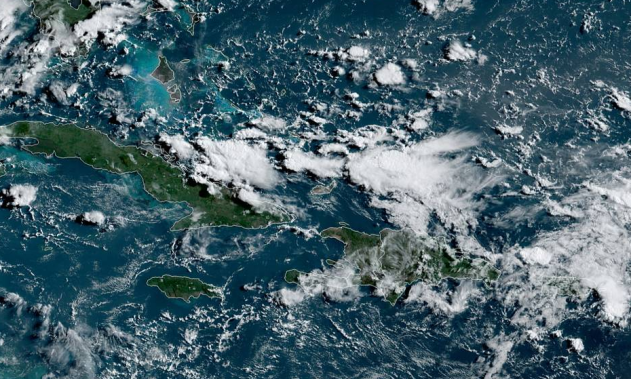 This image taken on the morning of Wednesday, July 31, 2019, shows a flair-up of thunderstorms associated with the tropical disturbance passing near Puerto Rico and approaching Hispaniola. (NOAA/GOES East)

"However, there is some wind shear in the path of the disturbance, and its forecast path takes the center near or over Hispaniola at midweek," Rathbun said.

Hispaniola is one of the largest islands in the Caribbean. The Dominican Republic, which shares the island with Haiti, has mountains as high as 10,200 feet. 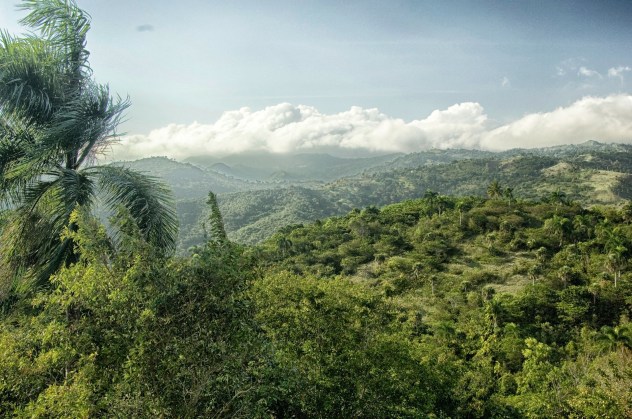 Image of the terrain in the Dominican Republic. (Pixabay)

The drag exerted by the islands of Puerto Rico and Hispaniola, combined with wind shear, may be enough to keep the feature from organizing.

The same rugged terrain can squeeze out copious amounts of moisture in the form of drenching showers and gusty thunderstorms.

While disturbances such as this can provide beneficial rainfall to the islands in their path, often too much rain falls too fast and results in flash flooding and mudslides.

Other concerns include the risk to small craft in the region. Sudden squalls produced by the budding feature can quickly raise seas and winds.

Beachgoers should keep an eye out for rapidly changing weather conditions when away from shelter at the beach.

What may happen beyond the Caribbean?

Should the feature survive the encounter with Hispaniola, conditions may be such to allow for organization and modest strengthening as it moves northwestward through the Bahamas and approaches the Florida Peninsula during the second half of the week.

Wind shear is forecast to be somewhat lower north of Hispaniola to just southeast of Florida.

"Assuming the system has held together or has organized, wind shear is forecast to increase right near and northeast of Florida late this week and into this weekend," Rathbun said.

Not only may this cause the system to weaken, but it may also steer it to the northeast and out to sea over the western Atlantic.

How close to Florida the system gets and how organized it gets is uncertain during the period from Friday to Sunday.

The system will encroach on a front that stalls and weakens in the Southeastern states and along the mid-Atlantic coast with a swath of drenching showers and thunderstorms. 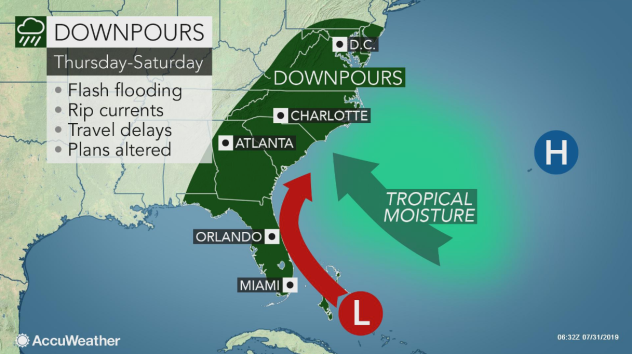 "Regardless as to the whether the system fails to organize or becomes a tropical depression near Florida, the weather pattern is likely to unleash heavy rain in the Bahamas and part of the Florida Peninsula from late this week to this weekend," according to AccuWeather Senior Meteorologist Eric Leister.

Interests from Florida and the Bahamas to the northern Caribbean should monitor the progress of this disturbance that is under investigation by the weather community.

Waters are sufficiently warm along the projected path of the feature. Thus, it is possible that if it overcomes the pockets of wind shear and friction from land areas, development can occur at any time during a flare-up of thunderstorm activity near the center.

Vast areas of wind shear and dry air have been largely inhibiting tropical development over the Atlantic basin this season so far, which is often the case.

However, as August progresses, these inhibiting factors tend to shrink in size, and water temperatures peak over the basin.

Is there anything else out there in the Atlantic?

Tropical waves that emerge from the west coast of Africa become the leading source of tropical storm formation during the heart of the hurricane season, which peaks in September.

A tropical wave typically emerges from Africa every two to four days during the heart of the season.

One such wave emerged from Africa at the start of this week. 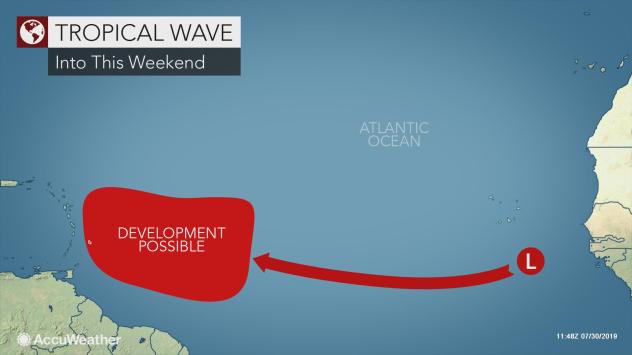 As that more robust wave travels westward and encounters a pocket of moist air with less wind shear, it may begin to develop as it approaches the Windward and Leeward Islands this weekend.

Should either of the two disturbances reach tropical storm status, the next name on the list in the 2019 Atlantic hurricane season is Chantal.