Tornadoes, hail and flash flooding spread damage across central US

Watch this drone get eerily close, as a tornado touched down in Sulphur, Oklahoma.

Several rounds of severe storms charged through the central United States, sparking tornadoes, hail, and flooding Tuesday. The severe weather is expected to continue into May, which is the most active month for severe storms across the region.

"A few of the tornadoes were strong with debris being reported from a tornado near Wheaton, Missouri, and another that tore the roof off a house near Boone, Arkansas," Rossio said.

At least 25 tornadoes were reported Tuesday across Texas, Oklahoma, Kansas, Missouri, and Arkansas.

An EF1 tornado was confirmed in Denton, Texas, by the National Weather Service on Wednesday. The tornado unleashed winds up to 90 mph.

Two fatalities, and at least 22 injuries, were reported in Oklahoma, according to the Associated Press. The body of a 55-year-old man was found in a submerged vehicle in Tulsa, but his identity has not been released. A 58-year-old woman died in Bryan County when her home near Bokchito was destroyed by high winds. Her identity has also not been released.

On Wednesday, Oklahoma Gov. Kevin Stitt declared a state of emergency for 52 counties due to severe weather and flooding.

Flooding was reported across Oklahoma City on Tuesday morning after storms overnight unloaded a week’s worth of rain in just a few hours. The storms also caused extensive damage to a home and other buildings west of Highway 169 north of Talala, Oklahoma.

A flash flood emergency was declared for downtown Davenport, Iowa, after floodwaters from the Mississippi River breached a barrier. Officials urged residents to avoid the downtown area as it's expected to remain inundated.

Iowa Gov. Kim Reynolds kept an eye on severe flooding in Davenport, with the help of the Iowa Department of Transportation and local officials. She told residents that evacuations could be necessary on Wednesday.

Davenport Mayor Frank Klipsch told the Associated Press that no injuries were reported in the flooding.

High school students in Bentonville, Arkansas, took shelter at their school, while some students were removed from their bus to seek shelter inside the closest school. All events associated with Bentonville Schools were canceled on Tuesday night as a result of the severe weather.

Numerous hail reports were recorded as well, including in Ozona, Texas, where hailstones larger than baseball size (2.75 inches) were reported. 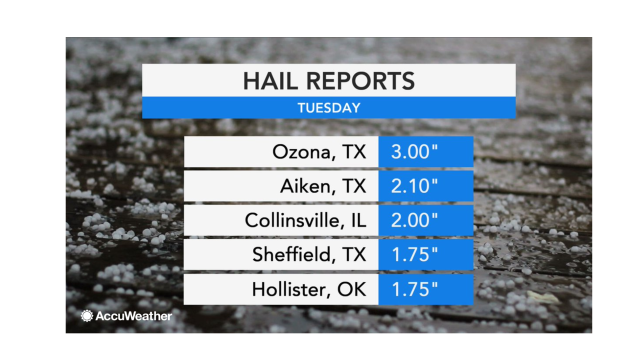 Severe thunderstorms will expand across the central and midwestern U.S. on Wednesday, including the same areas at risk of storms on Tuesday.

"Storms throughout this time period will be slow moving and capable of high rainfall rates over 2 inches per hour at times and can easily trigger flash flooding," according to AccuWeather Storm Warning Meteorologist Kayla St. Germain.

As of 4:20 a.m. CDT, these live reports are no longer being updated. Scroll down to see storm reports.

Although the threat for damaging winds and tornadoes has lessened across the south-central United States, heavy rain and drenching thunderstorms will continue to enhance the risk for flash flooding across the region and exacerbate ongoing flooding on area creeks and rivers. 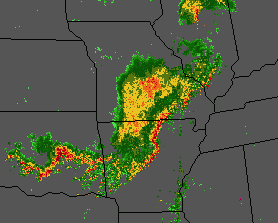 Slow-moving thunderstorms moving across parts of northern Arkansas have prompted the issuance of flash flood warnings. Areas hit by the heaviest, repeating downpours could receive two or more inches of additional rainfall.

Make sure to never drive through flooded roadways since it is impossible to tell how deep the water covering a roadway is using only one's eyesight.

Thunderstorms moving eastward from Oklahoma into Arkansas have prompted severe thunderstorm warnings across western portions of the state. People in the path of these storms should be prepared for wind gusts in excess of 60 mph, torrential downpours and even an isolated tornado.

Radar Update: 11:45 PM - We continue to monitor a line of strong & severe storms moving across eastern OK. This activity will affect parts of west-central Arkansas over the next few hours. Damaging winds and large hail will be possible, along with an isolated tornado. #arwx pic.twitter.com/z3pLqAFzlR

Residents in the path of the storms should be prepared to take shelter when the violent weather threatens.

Multiple rounds of heavy rain through 7AM Thursday have prompted a Flash Flood Watch for the entire area. #mowx #kswx pic.twitter.com/bteHa6rZZd

Tornado Watch in effect until 3 AM. Storms that have been producing tornadoes will move into southeast MO and southwest IL. #mowx #ilwx pic.twitter.com/87c9pa5pgV

Flash flooding is affecting the Kansas City area right now, causing the closure of some roads.

Never enter swiftly flowing water, and do not try to drive or walk through standing water because underneath the road could be compromised or blocked by debris.

Flash flooding and areal flooding continues across the area right now, with some closed roads.

Here is an update on what flood-related warnings are currently in effect. #TurnAroundDontDrown pic.twitter.com/ESRHzzfaeH

Iowa Gov. Kim Reynolds said she is in contact with the Iowa Department of Transportation and local officials who are on the ground in Davenport watching the severe flooding.

Oklahoma City is experiencing flash flooding in the metro area. Officials are urging residents not to drive through water.

Flash flooding is occurring all over the metro. Do not drive into high water. Turn around, don't drown. #okwx

Never seek shelter under an overpass. The wind from the tornado will actually accelerate as it blows through the underpass likely sweeping everything away. There is also the risk of too many people stopping, blocking the roadway, which can cause more problems.

According to reports, there was a tornado north of Dean, Texas.

There is major structural damage to a home and other buildings west of Highway 169 north of Talala, Oklahoma.

Reports say a woman who was inside the home is uninjured.

Extensive damage to home and surrounding structures just west of Hwy 169, north of Talala. Was told by emergency crews a woman rode out the tornado inside the home and was uninjured! #okwx @FOX23 @jamesaydelott @LauraMockWX @NWStulsa pic.twitter.com/9pzLmDVWlE

High school students in Bentonville, Arkansas are taking shelter at their school. Some junior high, middle school and elementary students have been removed from their bus and are sheltering inside the closest school. Once the warning is lifted, and it's safe to do so, students will be reloaded and taken home.

All events associated with Bentonville Schools are canceled tonight as a result of the severe weather.

A radar confirmed tornado is near Talala, Oklahoma. This has been declared a particularly dangerous situation by the National Weather Service (NWS) in Tulsa, Oklahoma.

"At 2:52 p.m. CDT, a confirmed large and extremely dangerous tornado was located four miles west of Talala, moving northeast at 30 mph," the NWS said in their tornado warning.

A tornado was reported near Sulphur, Oklahoma, earlier today, located southeast of Oklahoma City. It is unclear at this time if the tornado caused any property damage. 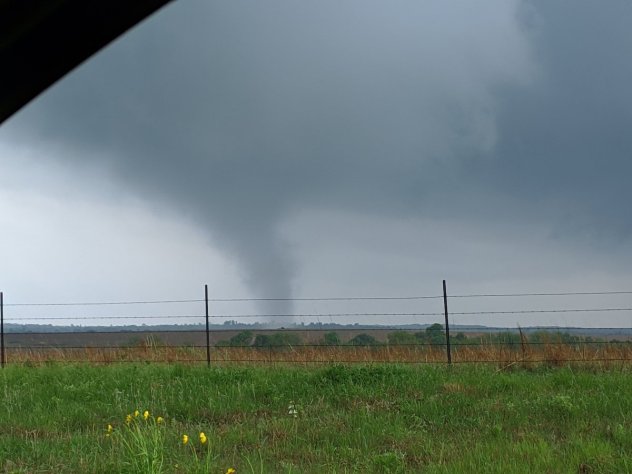 A tornado that touched down near Sulphur, Oklahoma, on Tuesday morning. (Twitter/Christiaan Patterson)

A tornado watch is in effect for most most of central and eastern Oklahoma, northwestern Arkansas, southeastern Kansas and southwestern Missouri until 11 p.m. CDT Tuesday, with severe thunderstorms expected to become more widespread over the next several hours.

The first severe thunderstorms of the day tracked directly over Amarillo, Texas, hammering the town with hailstones as large as golf balls. Some people panicked, rushing to protect their cars amid the hailstorm, according to one social media user.

Not long after, the first tornado warning of the day was issued just northeast of Oklahoma City, although no tornado has been reported. 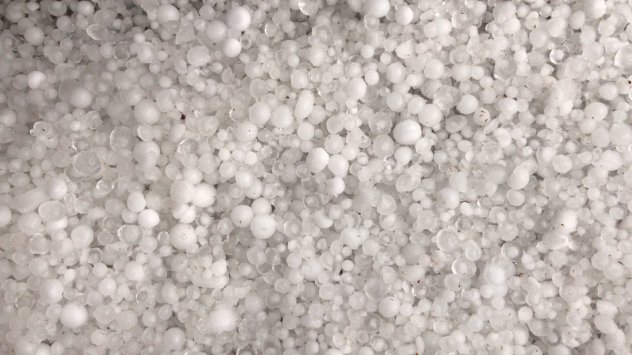 Hail that accumulated in Amarillo, Texas, during a severe storm on Tuesday morning. (Twitter/Jason Boyett)