EXCLUSIVE: Wildfire season is shaping up to be another historic one. Get the 2021 forecast.
Tens of thousands without power as deadly storms hit Southeast. Get the latest.

Rounds of rain, severe thunderstorms to raise flood risk in central US this week

Another round of severe weather is ahead for the large threat zone, with large hailstones and tornadoes possible.

A persistent storm track will cause rounds of rain and severe thunderstorms with an elevated risk of flooding to extend from the southern Plains to the Midwest this week.

The setup will allow storm systems to travel from southwest to northeast in this swath. Some areas may be hit on a daily basis with potent thunderstorms and torrential downpours. 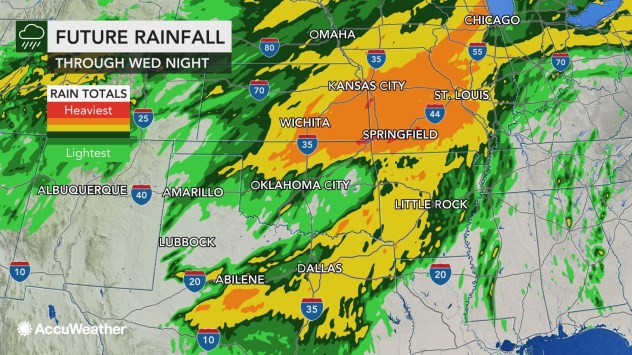 Severe thunderstorms to re-fire over Plains on multiple days

Episodes of severe thunderstorms will extend from Texas to as far as the Midwest this week.

Damaging winds will be a fairly widespread concern with incidents of large hail and a few tornadoes.

While winds can be strong enough to break tree limbs over a large area, anywhere the ground is saturated from ongoing rain, the risk of poorly rooted trees being knocked over will be much higher.

On Wednesday, the severe weather threat is likely to extend from central Texas to south-central Missouri. 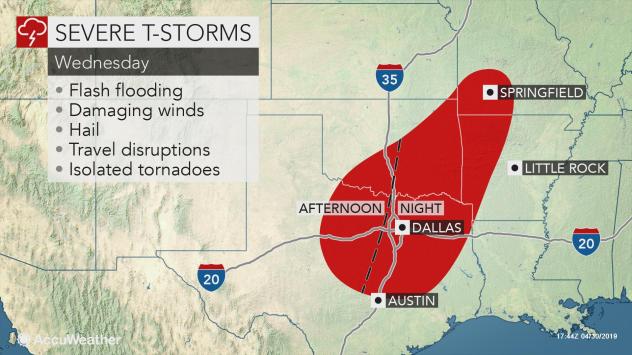 This region, which was hammered by severe weather on Tuesday, will be hit with another round of violent storms in the afternoon and evening. The thunderstorms will bring the threats of hail and damaging wind gusts in excess of 60 mph. Combined with the gusty winds, heavy downpours could bring low visibility for a time. This would especially be a threat for those on the roads during a thunderstorm.

Flooding risk to focus on nearly a dozen states

Intertwined in the areas of severe thunderstorms, as well as over an even more extensive swath, is the likelihood of flooding.

Cities that can experience both severe thunderstorms and problems related to flooding rainfall include St. Louis, Springfield and Kansas City, Missouri; Dallas and Abilene, Texas; Oklahoma City and Tulsa, Oklahoma; Wichita and Topeka, Kansas; and Fort Smith and Fayetteville, Arkansas.

A levee reportedly failed in Iowa on Tuesday afternoon, causing water to flood part of Davenport. It is unclear at this time what caused the levee to fail.

"Storms throughout midweek will be slow moving and capable of high rainfall rates over 2 inches per hour at times, which can easily trigger flash flooding," according to AccuWeather Storm Warning Meteorologist Kayla St. Germain.

"Overall, the heaviest rainfall through the period is likely to extend from northern Texas to the eastern parts of Oklahoma and Kansas to the western parts of Arkansas and southern Missouri," St. Germain said.

Enough rain to trigger flooding is also anticipated farther to the northeast toward the Great Lakes region.

Through Wednesday alone, an AccuWeather Local StormMax™ of 8 inches is likely over portions of the central and southern Plains.

However, through Thursday, a few parts of this region may receive double-digit rainfall amounts.

Flooding of urban and small streams, as well as some major rivers, through the region is likely. 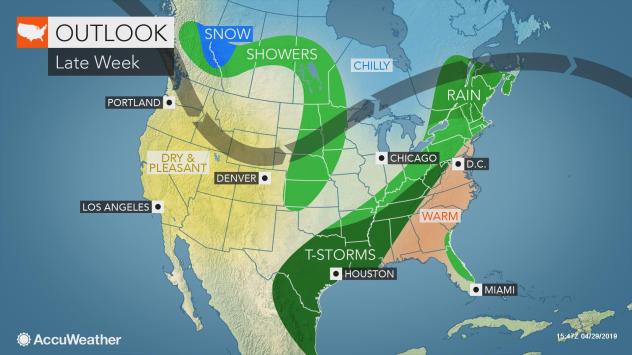 Motorists should anticipate some road closures in low-lying areas along small streams and tributaries of larger rivers.

The smaller rivers will tend to react and have significant fluctuations this week, including along the Missouri, Arkansas, Trinity and Red River of the South.

As the water flows into progressively larger streams, it is likely to have a more long-term effect on the middle and lower portion of the Mississippi River.

Download the free AccuWeather app for the minute-by-minute forecast for your area. Keep checking back for updates on AccuWeather.com and stay tuned to the AccuWeather Network on DirecTV, Frontier and Verizon Fios.

Mother's Day weekend storm to pose dangers to central US

Tens of thousands without power as deadly storms hit Southea...

Don't put away jackets yet! Cool wave to interrupt warmth

May to bring 1st total lunar eclipse since 2019 Communities begin picking up the pieces after severe storms Lightning strike too close for comfort in Alabama When to turn your headlights on during the day

Conditions coming together for another historic wildfire season in US

US is becoming warmer with each decade, new numbers reveal