Southeastern US at risk for flash flooding, travel disruptions as deadly downpours persist

AccuWeather's own Jonathan Petramala was in St. Petersburg, Florida when a powerful storm caused flash flooding, on August 1. Due to potential pump failures, this hotel car garage became filled with water.

Numerous downpours will continue to soak the southeastern United States this weekend as tropical and non-tropical features converge and wring copious amounts of moisture out of the atmosphere.

While incidents of flash flooding will tend to be isolated and favor heavily-paved urban areas, downpours will continue to soak many communities from the Atlantic beaches of the Southeast to the lower Mississippi Valley and eastern parts of Oklahoma and Texas through Sunday.

Locally drenching and severe thunderstorms will also extend into the Northeast.

Thursday's rain took a deadly turn turned when a heavy downpour caused a rock slide, which brought a downed tree on top of 73-year-old Barry Wallace's minivan on US 441 near Gatlinburg, Tennessee, according to WBIR 10 News. 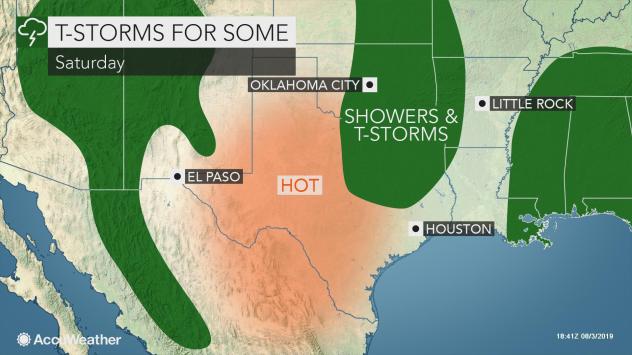 According to authorities, Wallace was the only person in the car and died from his injuries.

Dana Soehn, a spokesperson for the park, told the news agency that the area had received over 4 inches of heavy rain in just a little over an hour. 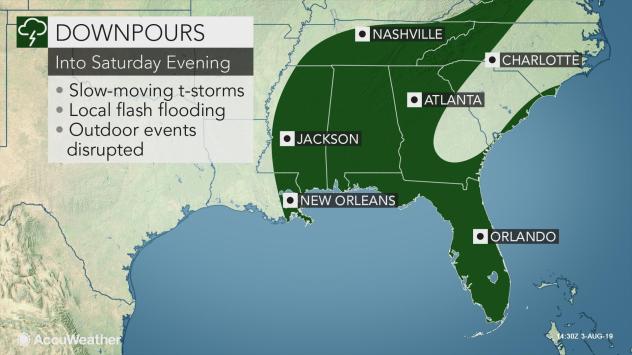 Other portions of the Sunshine State were also doused with more than an inch of rain falling on Orlando, Vero Beach and Jacksonville to name a few.

Farther north, rain poured down as well over the mainland part of the Southeast states.

Downpours also drenched part of the Atlantic metro area, as well as Macon, Georgia; Charlotte, North Carolina; Lynchburg, Virginia; and Patuxent River, Maryland. Each of these locations received more than an inch of rain on Thursday.

These and other areas can expect more rain to fall through Sunday. 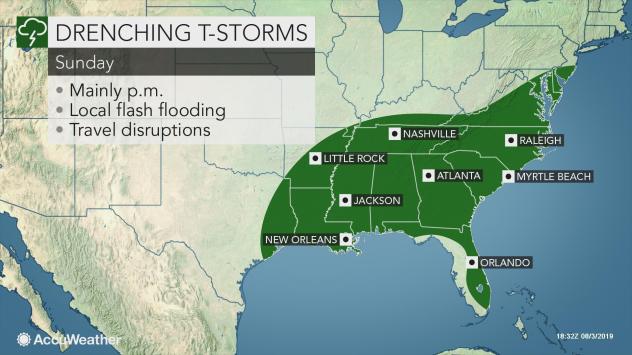 There is the potential for 1-3 inches of rain to fall per day in some locations. In some cases, the rainfall can occur in as many hours.

Motorists should expect delays as downpours bring sudden low visibility and cause water to collect in poor drainage areas on streets and highways.

However, while these will be less-than-ideal conditions at the beach, ballpark or fishing hole, it will not rain the entire time through this weekend even at the rainiest spots.

With some exceptions, the bulk of the downpours will occur between 3 and 9 p.m. local time. 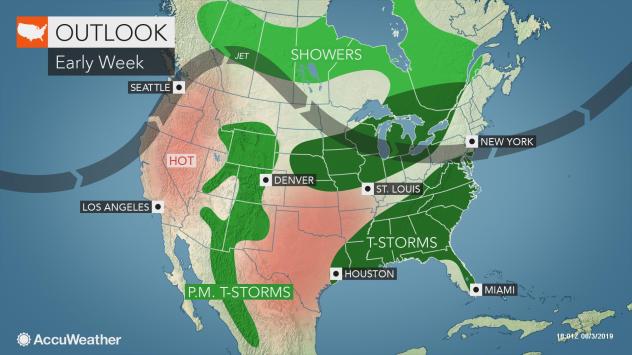 Boaters and anyone outdoors should keep an eye out for rapidly changing weather conditions. Bathers should use caution, in addition to the risk of lightning strikes, rip currents may be stronger and more frequent than average.

The wet pattern is being brought about by three main factors. These include a stalled front, a southward dip in the jet stream and sprawling tropical moisture over the Southeast states with a weak tropical disturbance just offshore over the Atlantic.

The tropical disturbance will gradually track away from the Southeast this weekend, but the overall unsettled pattern is likely to persist across the region through early next week.