There are many accidents on winter roads each year. It's always better to stay home than brave dangerous roads, but if you must drive, a little caution can go a long way.

A major storm will combine snow and increasing wind to create a swath of blizzard conditions from the High Plains Saturday night to part of the Mississippi Valley on Sunday and the Great Lakes region by Monday.

While millions of people had few problems heading to their Thanksgiving destination earlier this week, the same cannot be said for those heading home this weekend over a large swath of the Rockies and central United States.

The storm that began to produce snow on Thanksgiving Day over portions of the Cascades and Sierra Nevada in the West is the one poised to cause wintry trouble in the form of snow, icy roads and blowing and drifting snow.

As the new storm moves along, snow will extend along an approximate 2,000-mile-long swath to the Rockies, Plains and Upper Midwest during the extended holiday weekend. 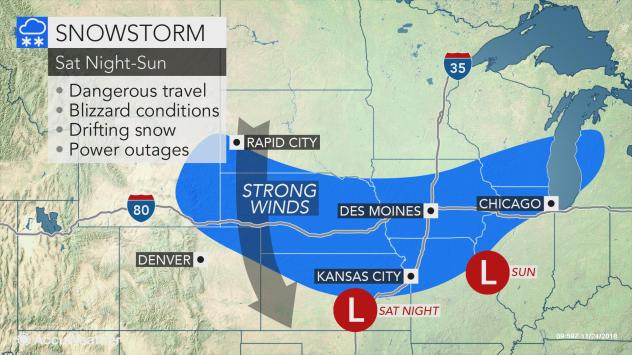 Following local blizzard conditions over the Rockies during Friday night to Saturday, similar difficult and dangerous travel is anticipated for motorists over the Plains along the Interstate 80 corridor and part of I-70 during Saturday night.

Near-blizzard conditions may develop from near the Topeka, Kansas, and Omaha, Nebraska, areas to Des Moines and Davenport, Iowa, Rockford, Illinois, and Madison, Wisconsin, during Sunday. These conditions may occur even though the storm may begin as rain or a rain and snow mix. Temperatures will dip as the storm unfolds. Expect conditions to deteriorate across the I-35 and I-80 corridors in the region.

A general 3-6 inches of snow is forecast for a large swath of the central Plains and Upper Midwest with a band of 6-12 inches accumulation within and locally higher amounts. The exact track of the storm will determine the northern and southern extent of the accumulating snow and where the heaviest band of snow will set up. 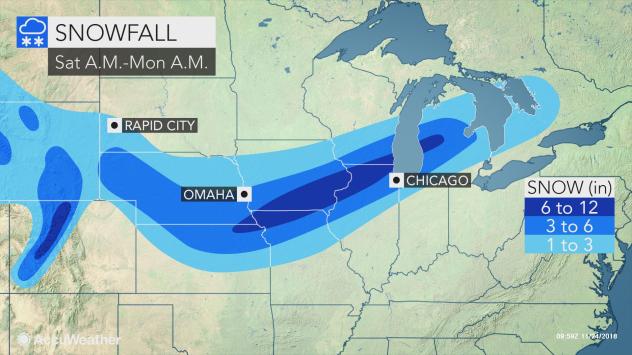 The same wintry conditions from the Plains may unfold in Milwaukee and perhaps much of the Chicago area from Sunday night to Monday.

"The combination of extra moisture from Lake Michigan, colder air and strong winds may lead to whiteout conditions and a rapid accumulation of snow in Chicago during the second half of the storm," according to AccuWeather Meteorologist Steve Travis.

Expert explains whether you should opt for all-season or winter tires
Why snow, colder weather conditions don’t debunk climate change
Top hacks to deice your vehicle during winter’s icy grip
How to protect your pets from winter weather
Storm to spread quick shot of ice, rain across eastern US this weekend

Airline passengers departing, connecting or arriving in Chicago from late Sunday to Monday should anticipate substantial delays and possible flight cancellations. For some people, an earlier flight through Chicago may be a wise choice.

In the worst-case scenario, a foot of snow may fall from near Chicago to near Milwaukee during Sunday night to Monday with gusty winds that may shut down air travel and greatly hinder travel on the roads.

Those with flights in or out of Detroit, Cleveland and Pittsburgh are likely to have an increased risk of delays or cancellations spanning Sunday night and Monday. Only a small amount of snow is likely across northeastern Indiana to northern and eastern Ohio, but a freeze-up and gusty winds may cause the most problems in this area.

Download the free AccuWeather app to check the latest forecast for your departure and destination. 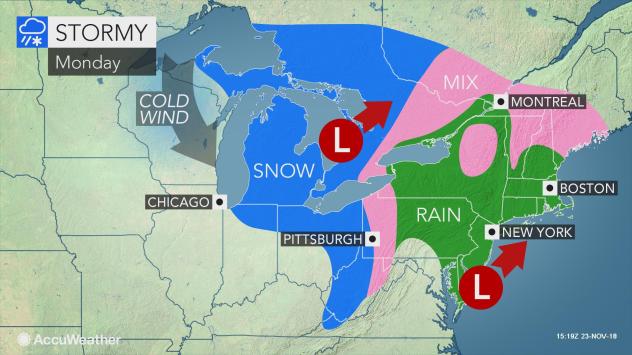 Cold air from the storm will cause rain to change to snow or snow showers from west to east during this period. Gusty winds are likely to accompany the snow farther to the east over the Great Lakes region to the eastern end of the Ohio Valley.

From Monday to Monday night, as one part of the storm center weakens, a new center may form along in the coastal Northeast. Depending on how quickly this new storm occurs, rain may change to heavy snow in parts of upstate New York and New England.

How much snow do you think will fall? Click on the image above to make your prediction now and play Forecaster Challenge.