Serious flooding risk to extend from Louisiana to Carolinas, Virginia and West Virginia

Through this weekend, the risk of flooding rainfall will extend from the lower Mississippi Valley to the Tennessee and Ohio valleys as well as the southern Appalachians.

While it will not rain continuously in this zone, two big rounds of rain, one winding down and another to come will cause trouble for residents and travelers in the region.

Rainfall over much of this swath since the late autumn has averaged 1.5 to 2 times that of normal. In recent weeks, much of the area from Arkansas to southern Ohio and Kentucky has received 6-12 inches of rain.

As a result of the excessive amounts of rainfall falling on cold ground, the ground is saturated.

Streams and rivers are already running high. Gauges along much of the Ohio and lower Mississippi rivers are indicating water levels above flood stage. In some cases, water levels along portions of these rivers, as well as sections of the Tennessee River, are forecast to reach major flood stage either this week or next week. 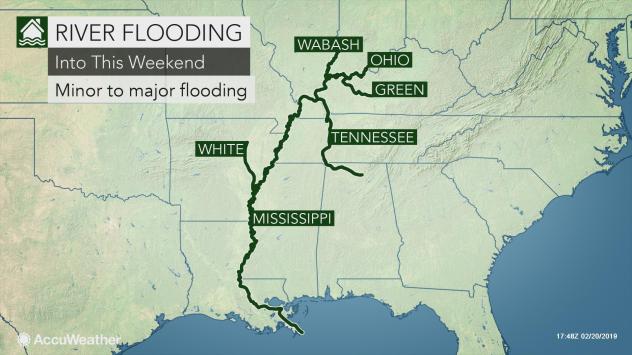 While levees and dams will help to mitigate the situation in some cases, unprotected areas along the major rivers may become submerged for an extended period.

Urban flooding is also a concern from both the storm at midweek and then another storm this weekend.

Drenching rain broke out along much of the Interstate 20 corridor from Texas to Georgia and South Carolina during Monday night and Tuesday. On the northern edge of the rain, pockets of sleet and wet snow occurred.

Rain is forecast to linger from northeastern Teas to North Carolina on Thursday. This is ahead of the next major rainfall. 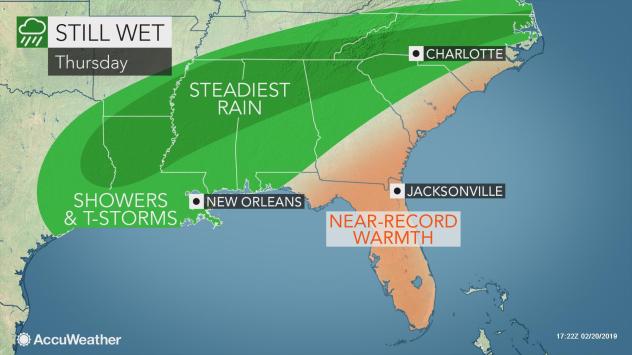 A second storm is likely to focus rain over much of the same area this weekend and may double the five- to seven-day rainfall total. 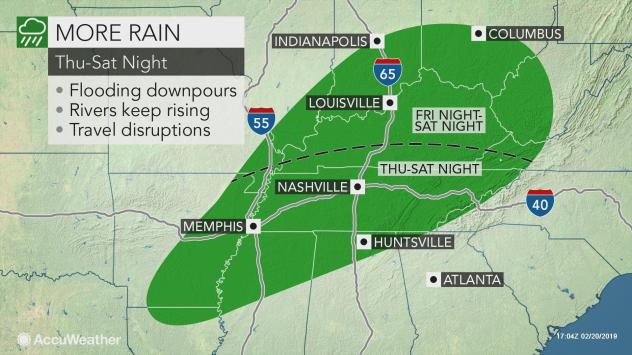 In some cases combined rain from both the midweek storm and the storm to end the week may top 10 inches.

What the region needs is an extended period of dry weather for several weeks to get out of the flooding situation. However, there are no signs of such a long break from storms with significant rain.

Central Plains blizzard to spread to Upper Midwest into Sunday, creating dangerous travel Winter storm to pound New England into Thursday morning after snarling travel from DC to New York City What you should do if you get stuck driving in floodwaters AccuWeather 2019 US spring forecast

"The pattern may trend less rainy with rain falling less often for a time at the end of the month into early March," according to AccuWeather Long-Range Meteorologist Max Vido.

The main storm track and localized flooding rainfall may shift toward the central Gulf coast during early March.

"However, as the storm track shifts northward during the spring, we may get a revival of frequent heavy rain events that can aggravate the flooding situation later in March over parts of the Ohio, Mississippi and Tennessee valleys," Vido said.

So while fluctuations in rainfall and magnitude of flooding are to be expected over parts of the south-central United States moving forward into the spring, long-term relief from potential flooding is likely many weeks away.