Longing for Spring? It's just around the corner! Find out what's in store for your area in the AccuWeather 2019 Spring forecast.

While Punxsutawney Phil may have proclaimed the end of winter on Groundhog Day, AccuWeather forecasters say it's a bit premature for much of the country.

Spring weather will take its time to arrive in the Northeast, mid-Atlantic and Great Lakes, with the chance for snow as late as mid-March.

In the Midwest and much of the Plains, prolonged warmth will arrive in mid-April, save for the earlier odd spell of springlike air.

Meanwhile, the Southeast and Gulf Coast will buck the trend, with Arctic air retreating quickly and the threat for severe weather not far off.

Quick flip to spring warmth not in the cards for Northeast, mid-Atlantic and Great Lakes

The last snowfall of the season may not be until the beginning or even middle of March, threatening to impact I-95 cities like New York, Philadelphia and Washington, D.C.

“In the Northeast, we aren’t expecting an immediate flip to springlike weather on March 1,” AccuWeather Long-Range Meteorologist Max Vido said. “However, once we get to the later parts of March and the beginning of April, we’re expecting a faster transition to spring than last year.”

By late April and May, snow worries will be replaced with warm swings and the threat for some severe weather.

Despite this, it won’t be a particularly wet spring for these regions.

“2018 was an extremely wet year,” Vido said. “This year it could be a little drier and people who had outdoor projects delayed from the summer and fall might have an opportunity to get out there and work on them.” 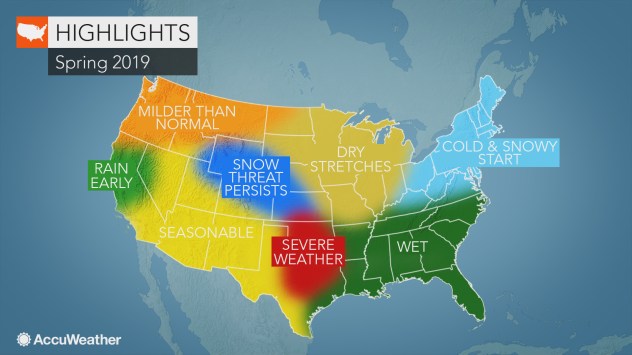 This spring, Arctic air is predicted to retreat quickly across the Southeast and Tennessee Valley.

A lower-than-normal risk for a late last frost or freeze will be good news for those hoping to get plants in the ground early.

The only hindrance to this may be the threat for above-normal rainfall across the region, with the potential for flooding in cities such as Houston, Texas; New Orleans, Louisiana; and Tallahassee, Florida.

Air to warm up quicker than last year in Ohio Valley, Midwest and majority of Plains

While winter weather lingered across the Midwest and northern Plains into the middle of April last year, a much faster transition is in store during 2019.

Bouts of warmer weather are predicted to arrive in the beginning of April and become more consistent by the middle of the month, particularly for northern areas like Minneapolis and Bismarck.

Some cities farther south could see occasional springlike temperatures in March, however.

A few stretches of dry weather are forecast during the season and, while drought is not expected at a regional level, there could be some localized issues, Vido said.

A seasonable transition to spring is in store this year, meaning March could once again welcome temperatures in the 70s and 80s F.

“People across the area should be able to get going on projects and planting pretty quickly,” according to Vido.

As far as spring severe weather goes, forecasters say it will be a normal to slightly below-normal year, with the frequency of events set to pick up in April and May.

Heavy rainfall is forecast to target the region at times, especially later in the season, with eastern Texas and Oklahoma on alert for urban and street flooding.

The abundance of rain could spur flooded fields, leading to delays for some farmers.

Why spring snow doesn’t pile up on roads but can yield other hidden dangers Why are hailstorms most common in spring? 4 dangerous weather threats to watch out for during spring Spring cleaning hacks to rid your home of allergens 5 hacks to keep outdoor allergy symptoms at bay this spring

Drought conditions to ease back in Southwest, California

A long-standing drought across the Four Corners region, Arizona and Southern California will finally ease back as winter comes to a close.

According to Vido, “We’re expecting a few more precipitation events through the end of winter into the beginning of spring that can improve the situation there.”

Meanwhile, as spring takes hold across the Southwest, above-normal warmth is not on the cards.

“Cloudy conditions at times will hold back extreme heat, preventing a high frequency of those events this year,” he said.

Dry and warm weather to dominate in the Northwest, Rockies

Spring won’t be quick to dive into the central and northern Rockies, as some late-season snow is possible for cities like Denver, Colorado, and Cheyenne, Wyoming.

Overall, however, drier- and warmer-than-normal conditions are in store for the Northwest and northern Rockies this season.

These areas missed out on frequent stormy weather over the winter, so drought issues could intensify into spring.

“There may be some concerns with water restrictions,” Vido said.