Nearly a century ago, lightning spawned a deadly fire that terrified a town for five days and triggered what was then described as "probably the strangest meteorological phenomenon ever noted in connection with a fire." 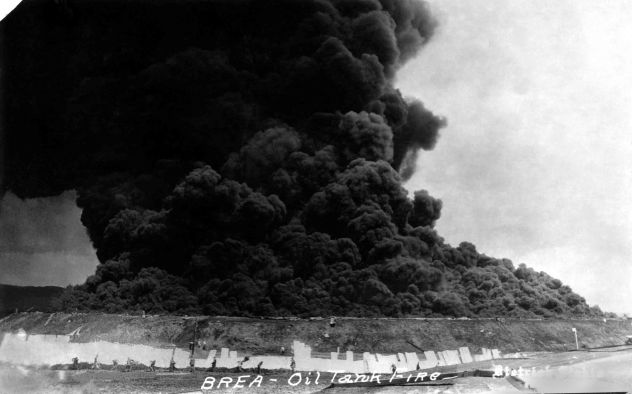 Smoke billowed hundreds of feet into the air as a result of lightning striking the Union Oil Company reservoirs on April 7, 1926. (Photo courtesy of the Workman and Temple Family Homestead Museum, City of Industry, California.)

Recent damage to homes and the environment in Southern California has some people thinking of the state's beleaguered fire history, including one deadly incident that took place nearly a century ago.

Roughly 150 miles north of the hub of Los Angeles sits the city of San Luis Obispo, part of California's central coastal region. Now a thriving city famous for its downtown farmers market and multiple museums, San Luis Obispo was under much less favorable conditions on April 7, 1926. That morning, a unique set of fires lit up the area, causing casualties and widespread structural damage.

Following some rain showers overnight, the morning of April 7 eventually brought accompanying discharges of lightning, the first of which was reported at 7:15 a.m. and was "mild" in nature. Reporting on the event came courtesy of a monthly weather review in April 1926, provided by the United States Weather Bureau Office.

About 20 minutes had passed until the "mild" storm became very intense, as a discharge of lightning around 7:35 a.m. was followed by an explosion so violent that hundreds of residents were under the impression an earthquake had transpired.

The explosion shattered 20 large plate-glass windows in a local storefront, as well as numerous small windows in residences. The event was so severe that local houses were rocked to their foundations, but it wasn't the result of an earthquake. The violent explosion was actually caused by the prior lightning strike, which had hit large oil reservoirs at the tank farm owned by Union Oil Company, located about 2.5 miles south of the center of San Luis Obispo.

Striking three of the farm's oil reservoirs, each with a capacity of 750,000 barrels of oil, the lightning bolt exploded oil and vapor from the tanks, causing all-out chaos in the city for days. In the aftermath, melted cast iron fittings found at the scene indicated that the temperature of the burning oil was between 2,000 and 2,500 degrees Fahrenheit.

About 15 minutes after the first significant explosion, the fourth reservoir at Union Oil Company caught fire and exploded. The cause of the fourth reservoir's explosion is still unclear nearly 100 years later, as an inspector for Union Oil stated at the time that another lightning discharge prompted the expanded oil fire. However, other accounts from the time suggested that the explosion of the first three reservoirs tossed burning timbers into the fourth and was the catalyst. 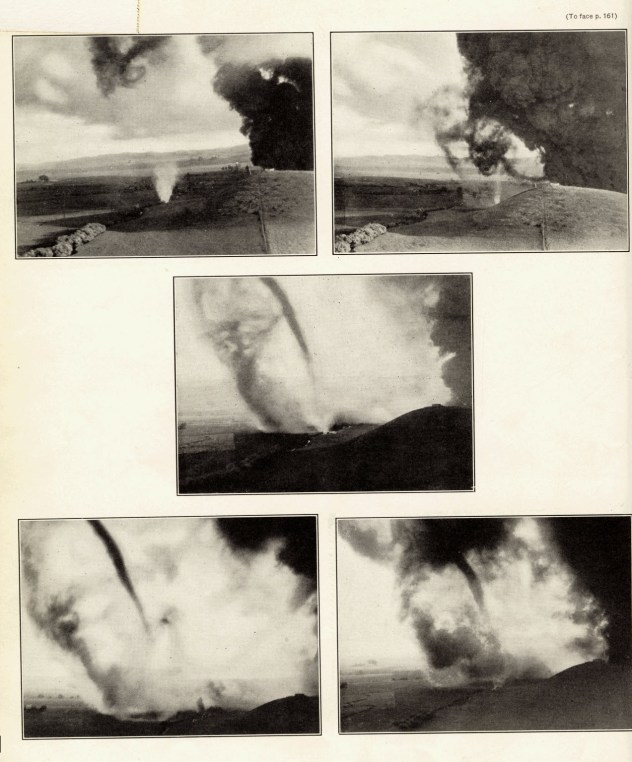 Millions of barrels of oil burned over the five days among the helpless population, as archived footage shows, with approximately 6 million barrels stored at the farm becoming fuel for the blaze. The fires resulted in the loss of two lives and were blamed for an estimated $15 million in property damages, the equivalent of about $245 million in 2022 dollars. Adding to the danger was the "boiling over" of the flaming reservoirs, as burning oil was thrown onto the ground and eventually spread to an area of about 900 acres.

Flames leaped to nearly 1,000 feet in the air and brought a unique threat to San Luis Obispo residents. The fire produced hundreds of firenadoes, or violent whirlwinds that shared characteristics with tornadoes, noted at the time as "probably the strangest meteorological phenomenon ever noted in connection with a fire."

The funnel-shaped clouds created by the fires were seen by thousands of locals, as the white, condensing vapor in the vortices was plainly visible against the black smoke background. None of the tornadolike events traveled more than 3 miles from the oil fire zone, as evidenced by debris found in the aftermath.

One of the tornadic whirlwinds traveled outside of the reservoir vicinity to a local cottage owned by resident A.H. Seeber. The whirlwind lifted the cottage several feet in the air, carrying it about 150 feet before the structure was dropped in a field.

Not surprisingly, it was completely destroyed. Seeber and his son died in the incident, while two others just outside the cottage (including Seeber's daughter) were also carried away but did not suffer significant injuries.

A recap of news clippings from the time period, provided by the Homestead Museum Blog, states that while no other injuries were reported, "hundreds" of fire responders were engaged in battling the flames over the five fateful days. As for Union Oil itself, a half-dozen employees of the company's warehouse, among others, barely escaped injuries when the fires hit. Residents within several miles of the 300-acre property were forced to evacuate due to the flames.

At the same time San Luis Obispo was dealing with the flames, a little over 200 miles away in Brea, California saw a similar lightning strike-created oil fire, which began a day after the tank farm fire in San Luis Obispo. Due to first-responders attention being on the April 7 Union Oil fires, the response to Brea was less than ideal, leading to that fire causing approximately $5 million in damages.

The Union Oil Company tank farm fire is now known as "the worst environmental disaster to hit the central coast," causing the land to remain "toxic" even in modern times. Near the original fire site, pieces of glass from the reservoirs can still be found, a physical memory of the trauma inflicted nearly a century ago.