Although winter is still more than a month away, frigid low temperatures and heavy snow have made it feel like January for much of the country including the Great Lakes.

Temperatures in several major cities fell this week to lows not seen since the Taft Administration, shattering dozens of records as a bone-chilling cold front swept through the eastern half of the United States. As a punishing wave of January-esque Arctic air brought dangerously cold conditions, some cities had low-temperature records that hadn't plunged that low in more than 100 years.

Before Tuesday and Wednesday's jarring cold, many cities around the country had record low temperatures that were set in 1911. According to the National Weather Service (NWS), that storm shocked half of the nation with an incredible variance in temperature.

"On November 11-12, 1911, a cold front barged across the central and eastern United States with such force that it is still remembered over a century later," the NWS wrote. "In association with this front some cities set both a record high and a record low in the same day. Temperature plunges that have never been recorded before or since shocked the people who were in the cold blast's path." 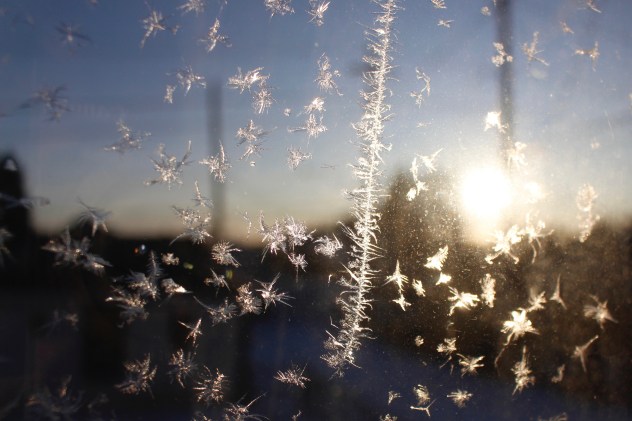 Ice forms on a window during the sunrise on Tuesday, Nov. 12, 2019, in Milwaukee. Snow and cold records fell from the Plains to the Great Lakes and beyond as an arctic air mass that started in Siberia spilled over a big chunk of the eastern half of the U.S., including the normally mild South. (AP Photo/Carrie Antlfinger)

It certainly seems likely that this week's record-breaking cold may also be remembered for decades to come.

In the heart of cold on Tuesday was the frozen state of Iowa. At least seven cities recorded subzero temperatures, including the capital city Des Moines, which broke its record low temperature when it reached minus 1 F. Ames and Marshalltown both broke records set in 1911 when the cities each reached minus 7. Cedar Rapids, the second most populated city in the state, reached minus 6 while nearby the city of Independence had the lowest mark in state, at minus 11.

Tuesday's lowest temperature in the Midwest could be found in Hibbig, Minnesota, where the mercury showed minus 13, smashing the old record of minus 9 from 1966. 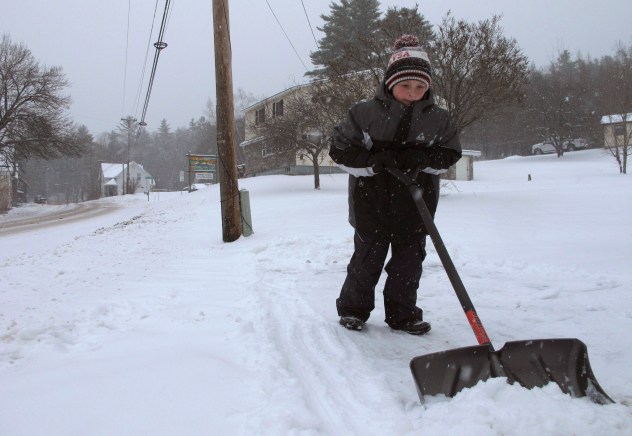 Kaiden Rogers shovels snow from his driveway on Tuesday, Nov. 12, 2019 in Marshfield, Vt. A wintry mix has swept into northern New England, with hundreds of schools closed or delayed in Vermont due to snow, and slick conditions in New Hampshire and Maine. (AP Photo/Lisa Rathke)

Philadelphians woke up to a record low on Wednesday when the city reached 23, breaking the previous record of 24. Residents in Detroit and Indianapolis could relate to City of Brotherly Love's frigid start to the day, as readings on thermometers in those cities slipped below 10 F for the first time ever on Nov. 13. 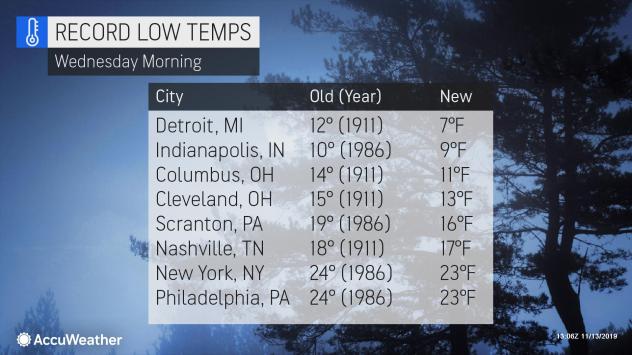 The dreadful conditions sparked Chicago Mayor Lori Lightfoot to open warming centers for citizens looking for a safe and warm place to stay. According to the city's statement, six different centers were opened around the region.

"A warming center is a heated facility where Chicago residents can go to find refuge from extreme cold weather conditions," the city wrote. "During the winter months, the Chicago Department of Family and Support Services (DFSS) operates six warming centers inside of the City’s six community service centers during work weekdays when temperatures dip below 32 degrees. Additional City facilities including, libraries, police stations or other structures might be made available after hours, on weekends, or on holidays, as conditions warrant."

Those centers were certainly necessary on Wednesday morning, when the city recorded a low of 7 F, breaking the previous record set in 1986. Rockford, Illinois, also had a record-breaking low thermometer reading when the mercury dipped to 3 degrees, according to the NWS.

At Chicago O'Hare International Airport, the low of 7 on Tuesday beat the old daily record of 8 set back in 1986 in the Windy City. Even when the temperature rose during the day, it didn't provided little relief as it topped out at just 17 degrees, smashing the previous record for the lowest high temperature for the day by a whopping 11 degrees. According to the NWS, the previous record low high temp for the day in Chicago was 28 set back in 1995.

The record-challenging cold also made its way into the South, with locations along the Gulf Coast, such as Mobile, Alabama, setting new records. In Baton Rouge, Louisiana, the low of 24 at the Baton Rouge Metropolitan Airport broke the previous record of 26 set back in 1907. 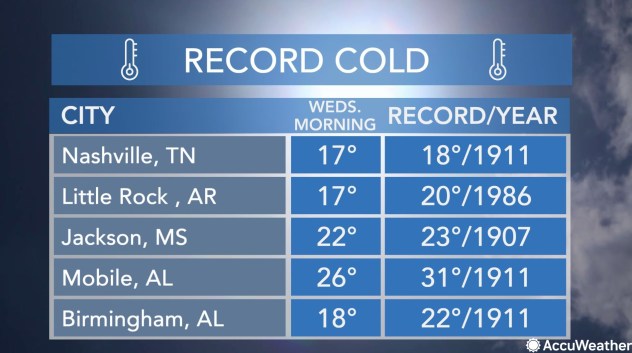 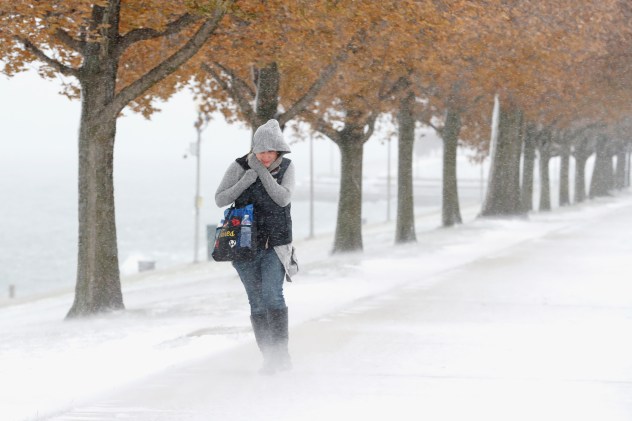 A woman walking the half mile from Chicago's Adler Planetarium to the Chicago Aquarium braces herself in the stiff wind and blowing snow off Lake Michigan, Monday, Nov. 11, 2019, in Chicago. (AP Photo/Charles Rex Arbogast)

Watertown, New York, broke numerous records on Wednesday morning. By reaching minus 6, the temperature broke the previous record by a whopping 17 degrees. It was also the earliest negative temperature reading of the year on record. 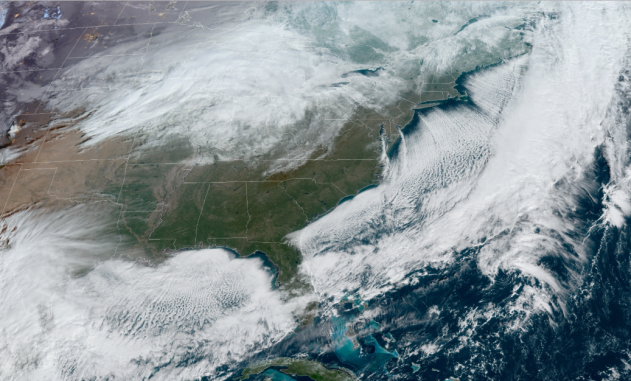 NOAA's GOES-East satellite captured this image of the eastern half of the continental U.S. on November 13, 2019, which shows freshly-fallen snow over the interior Northeast. (NOAA)

"A southerly breeze on the back side of the large Arctic high pressure system will warm the Plains into the Midwest beginning the week of Sunday, Nov. 17," Paul Pastelok, AccuWeather's lead long-range meteorologist, said. "In less than a week's time, temperature departures from normal over the southern and central Plains are forecast to go from 25-30 degrees below average to 4-8 degrees above average."

Download the free AccuWeather app to get the exact temperatures forecast for your area. Keep checking back on AccuWeather.com and stay tuned to the AccuWeather Network on DirecTV, Frontier and Verizon Fios.