After new batch of Arctic air, temps will flip above normal for some that have been enduring record cold

Although winter is still more than a month away, frigid low temperatures and heavy snow have made it feel like January for much of the country including the Great Lakes.

While there will be some bumps along the way, the core of the Arctic air that shocked much of the central and eastern United States in recent days will soon depart.

A southward plunge in the jet stream, which allowed the frigid air to blast southward into the U.S. and spread from the Great Plains to the Gulf and Atlantic coasts will linger into the end of this week. 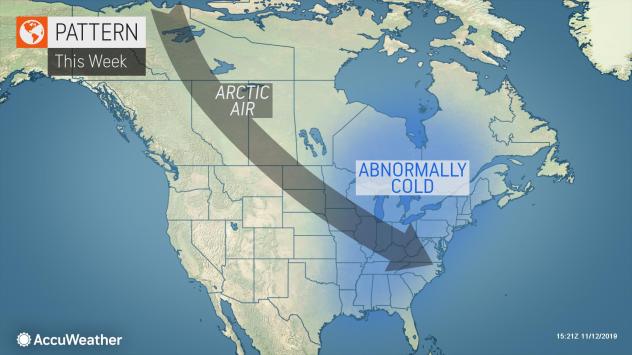 A reinforcing batch of Arctic air is forecast to roll from the Upper Midwest late this week to the Northeastern states this weekend.

However, AccuWeather meteorologists say the extreme nature of the cold weather is forecast to ease during the upcoming week.

"A southerly breeze on the back side of the large Arctic high pressure system will warm the Plains into the Midwest beginning the week of Sunday, Nov. 17," Paul Pastelok, AccuWeather's lead long-range meteorologist, said.

At the jet stream level of the atmosphere, the pathway from the Arctic will be severed. Instead, a westerly flow from the northern Pacific Ocean will bring marine air across western Canada and then to the Plains and Mississippi Valley. 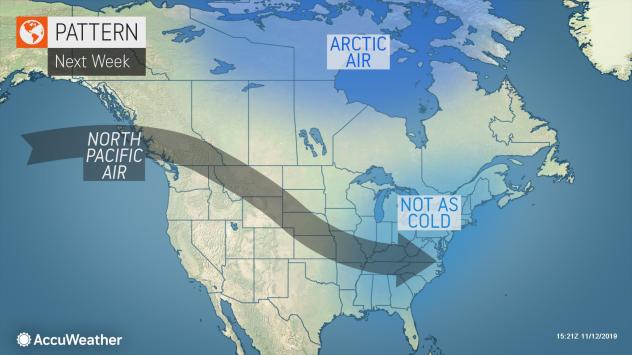 In Chicago, where several new record lows were set this week, highs in the middle 20s from Wednesday will be replaced with highs near 40 by early next week.

The moderating trend will spread into much of the Eastern states as the third week of November progresses, but temperatures in the Southeast are expected to trend upward later this week.

"Temperature departures of 15-30 degrees in the East will recover to near average during the third week of November," Pastelok said.

Around New York City, highs in the middle 30s from Wednesday will be replaced with highs in the lower to middle 40s early next week.

The temperature turnaround will cause heating demand to ease significantly after the surge from this week.

One or more storms along the Atlantic coast from late this week to the middle of next week will create cloud cover, gusty winds and precipitation, which will hold back temperatures.

Depending on the track and strength of a storm forecast to develop over the Rockies and travel northeastward toward the Great Lakes, temperatures could surge to above-average levels parts of the East late next week to the weekend prior to Thanksgiving.

November, like March, is often a fickle month for weather

November is often a reverse mirror of the weather experienced during March with wild temperature swings not uncommon.

Blasts of cold air become more vigorous, while storms tend to bring a greater risk of snow and ice in Northern and Central states as November progresses. The storms can cause warm air to surge northward on their eastern flank and send frigid air southward on their western flank.

During November, the warming effects of the sun continue to diminish, lake and ocean waters cool and average temperatures trend downward by 10-20 degrees over the Central states and 5-15 degrees along the Atlantic coast.

During the steep downward slide in average temperatures this month, storms can create great temperature departures from average. A few days after a storm departs, temperatures may return to average, but that average may be several degrees lower than prior to the storm's arrival.

Download the free AccuWeather app to get the latest updates on the temperature changes and how it might affect your area. Keep checking back on AccuWeather.com and stay tuned to the AccuWeather Network on DirecTV, Frontier and Verizon Fios.