Records shattered as seasons play tug-of-war across the US 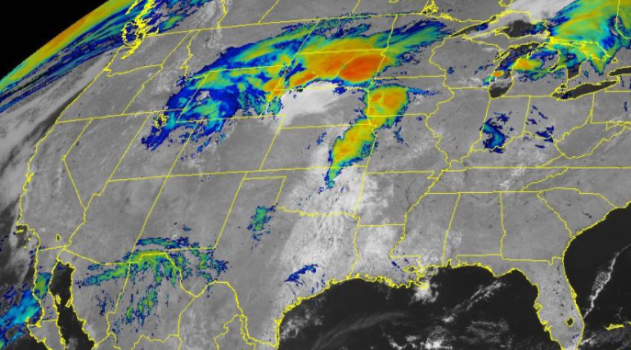 A storm system over the central U.S. as captured by satellite on Tuesday, April 6, 2021, was responsible for drastic temperature contrasts across the country. (NOAA / GOES-EAST)

As the first full week of April began across the United States, the weather was marked by a battle between winter in the Northwest as frigid air swept in behind a storm, and summer across the Plains as temperatures soared to record-setting levels.

The dividing line between this tug-of-war match was drawn by a storm system that moved out across the central Plains on Tuesday.

Ahead of the storm, temperatures across the center of the country surged Monday. Highs reached into the upper 70s F and 80s F from New Mexico, Texas and Louisiana to South Dakota, Minnesota and Wisconsin -- and a few locations even topped 90 F for the first time since last summer or autumn.

Sioux Falls, South Dakota, was one of the sites that reached 90 degrees Monday, setting a new record high temperature for the date. The previous daily record was 87 set back in 1991. It was also the earliest the city reached the 90-degree temperature benchmark in a calendar year, shattering the old record, which was set in 1954, by nine days. 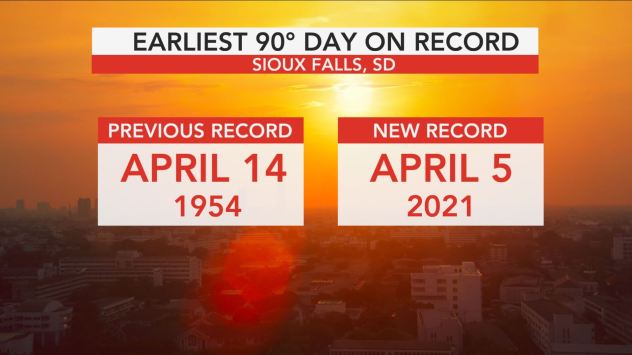 Sioux Falls hadn't experienced a temperature over 90 since late last summer when the high soared to 91 F on Sept. 6, 2020. And the summerlike day ended with a bang in Sioux Falls and surrounding areas. A severe storm pressed overhead of the Sioux Falls National Weather Service (NWS) office during the evening, spawning large hail.

The temperature at LaCrosse, Wisconsin, hit 80 degrees for three days in a row from Sunday through Tuesday. Not only is that a rare feat for so early in the season so far north, but it set a new record for the earliest three-day stretch of 80-degree weather for the city. The previous 3-day record was on April 5-7, 1991. All other stretches of 3 days or longer of 80-degree temperatures occurred after April 17.

Farther south, El Paso, Texas, recorded one of the highest temperatures across the Plains Monday when the mercury skyrocketed to 92 degrees during the afternoon hours and set a new record high for the date. The old daily record high of 89 F was set in 1942 and tied in 2016. The last time El Paso reached the 90-degree mark was on Oct. 21, 2020.

The recorded temperatures easily overshot normal high temperatures for the Plains in the beginning of April, which range from the lower 50s in the Dakotas to the middle 70s in western Texas. 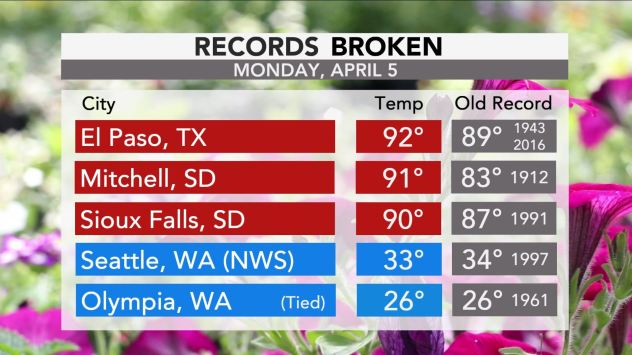 By Wednesday, record high temperatures had shifted farther to the east, with places across Michigan and Ohio soaring into the 70s and 80s. Even Caribou, Maine, had a record high of 61 on Wednesday, breaking the date's 1993 record by one degree. 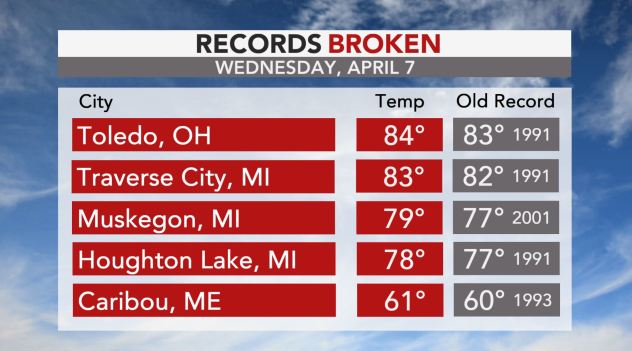 Temperature records were on the opposite end of the spectrum as a blast of Arctic air swept into the Northwest in the wake of the storm system.

The temperature at the NWS office in Seattle dropped to 33 F on Monday, breaking the old daily record low for this location of 34 F set in 1997.

Olympia, Washington, tied the daily record low of 26 degrees for the date, which was set in 1961.

The clash of warm and cold air across the U.S. is a common occurrence during the spring months. In addition to more daylight hours and an increasing sun angle, which allows temperatures to climb higher, the storm track across the country begins to shift north. This allows warmer air to reach places farther north across the nation.

At the same time, potent storms can still drag frigid air sitting over Canada deep into the U.S. in their wake.

That collision in opposing air masses is one of the main driving forces in the development of severe weather across the Plains and Southeast during March, April and May.

One such round of severe weather is expected to be centered over the southern portion of the Central and Eastern states on Friday and Saturday.