The powerful typhoon is expected to strike near the Tokyo area late on Saturday, October 12, 2019 local time.

Some locations may be without power for an extended period during and following the storm. 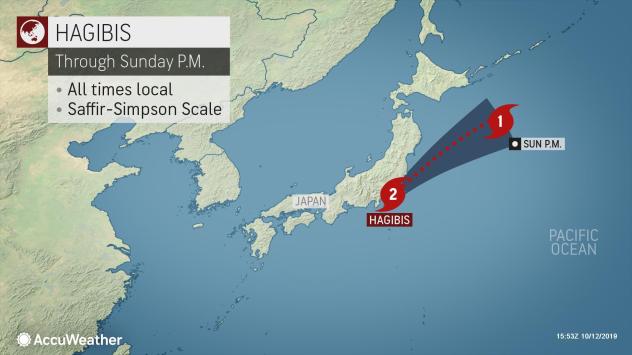 One man died when his car overturned in high winds in Chiba Prefecture east of Tokyo on Saturday, according to Reuters. Four others were injured in the prefecture when high winds ripped roofs off of homes. Tens of thousands of households have lost power.

NHK reported that a second man died after two houses in Tomioka city, Gunma Prefecture, collapsed in a landslide. There are rescue efforts underway to find the other two people from the incident who are missing.

Several people were reported missing from being washed away in flood waters and regional landslides.

A "heavy rain emergency" is in effect for central and eastern portions of Japan, which is the highest level on the Japan Meteorological Agency's five-tier scale, according to Japanese broadcaster NHK. The emergency means that landslides and flooding are imminent. 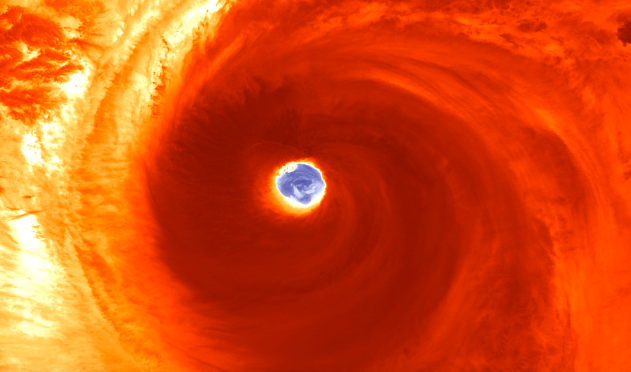 NHK reported on twitter that 750 domestic flights were cancelled on Sunday. Most rail lines were still altered or cancelled on Saturday evening as well.

It was also reported that over 430,000 homes were without power, according to NHK early on Sunday morning.

A wind gust of 160 km/h (100 mph) was observed at Kozushima Airport on Saturday, which is located on a small island southwest of Tokyo.

Video on social media showed a possible tornado sweeping through Chiba Prefecture during the typhoon's fury.

Rivers were beginning to overflow in Shizuoka Prefecture, with many roads underwater, according to NHK. One person was pulled to safety after being swept up by floodwaters, while another person remains missing.

Adding insult to injury was a magnitude 5.3 earthquake that shook the region on Saturday evening, local time, according to the United States Geological Survey. The temblor struck offshore about 55 km (34 miles) south-southeast of Katsuura, Japan. Light shaking was reported in Tokyo and surrounding areas amid the rain and wind from Hagibis.

While the interaction with land will help to speed up the weakening process, heavy rain and gusty winds can still be a threat to parts of Chugoku and Hokkaido through Sunday. 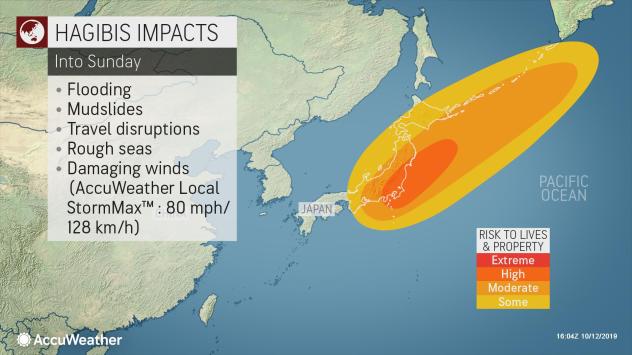 Another 3-6 inches (76-152 mm) of rainfall is expected across these areas, with higher amounts possible in the mountains. The risk for flash flooding, mudslides and travel disruptions will remain high across the region.

The shaking from the earthquake, in addition to the heavy, tropical rainfall which could already make the ground unstable, could increase the chances of mudslides across Japan.

Any threats lingering over the area on Sunday will end quickly as the storm races off to the northeast. Conditions across mainland Japan will be improving.

Hagibis is expected to transition into a nontropical system during the beginning of next week as it races away from area. A cold front passing over the region may bring some showers and periods of rain during the first half of the week before drier conditions move in as recovery efforts ramp up.

Ahead of the typhoon, rail operators and airlines issued cancellation notices for scheduled departures this weekend, according to the Japan Times.

Japanese broadcaster NHK reported that All Nippon Airways was cancelling all domestic flights on Saturday to and from Haneda and Narita airports in the Tokyo area, while Japan Airlines was cancelling nearly all of its flights.

On Friday, Toyota announced that operations at three of its factories in the prefectures of Fukuoka, Mie and Gifu would be suspended due to the typhoon.

Supermarket chain Ito Yokado will close 124 stores on Saturday. Shinjuku, Ginza and Ebisu stores in Tokyo will also be closed on Saturday.

Tokyo Disneyland, Tokyo DisneySea and Universal Studios Japan will all be closed on Saturday as well.

Aside from the risks to lives and property, Hagibis is expected has affected several sporting events across Japan.

Two Rugby World Cup matches that were scheduled for Saturday have been canceled and will be recorded as scoreless draws, according to BBC News.

The Japanese Grand Prix is also set to take place on Sunday afternoon, local time at Suzuka International Racing Course and Saturday's qualifying has been postponed until Sunday morning due to the adverse weather.

Earlier on its journey through the West Pacific, Hagibis battered Guam and the northern Mariana Islands from Monday into Tuesday.

Before reaching Guam, Hagibis went through a period of phenomenal strengthening as the storm went from a tropical depression with sustained winds of 48 km/h (30 mph) on Saturday to a super typhoon producing winds of 241 km/h (150 mph) only 48 hours later.

During this period of rapid intensification, Hagibis became the third super typhoon of the season and reached a peak strength of 257 km/h (160 mph), tying with Wutip from February as the most power tropical cyclone in the West Pacific basin this year.

Hurricane Dorian currently holds the distinction of strongest tropical cyclone on the planet this year with sustained winds of 298 km/h (185 mph).