Temperatures reached a high of 113 degrees F the day a 3-month-old Husky was found in a vehicle while his owner went inside a casino, police said. 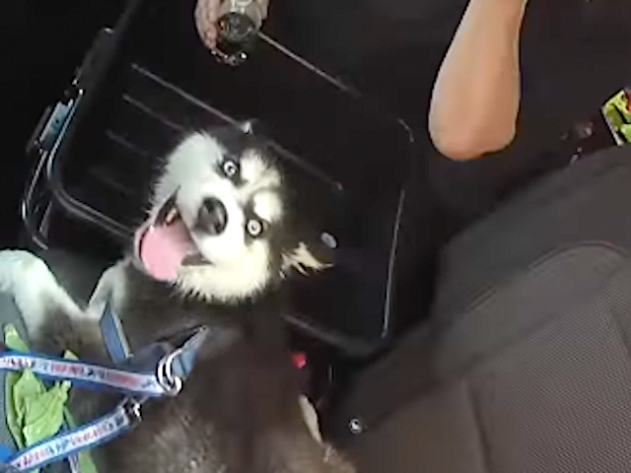 This 3-month-old Husky puppy sits in a waiting vehicle after being discovered in a locked car outside a casino as temperatures soared to a high of 113 degrees Fahrenheit on July 20, 2022.

Police arrested the owner of a puppy after the small canine was discovered with its mouth taped shut and locked inside a vehicle with the windows rolled up during an extremely hot day while the man gambled at a Las Vegas casino, authorities said.

The Las Vegas Metropolitan Police Department said it received a call from security at the Bellagio Hotel & Casino the afternoon of July 20 that the 3-month-old Husky puppy had been left in a Mercedes on the top floor of a nearby parking garage. His mouth was taped shut with electrical tape and he was "shaking," police said.

A man spotted the pup inside the car, which had tinted windows, and notified a security officer inside the casino. The officer went out to the car and managed to shimmy through the vehicle’s sunroof and lift the dog out, police said.

Investigators said the puppy was inside the hot car for nearly two hours, “without air conditioning, food, or water.”

The high temperature that day was 113 degrees Fahrenheit, according to AccuWeather data. But the temperature inside a closed vehicle can soar much higher within minutes, even with the windows cracked open a little, experts said.

“He wasn’t able to breathe,” an animal control officer is heard telling police at the scene on police body cam footage released Thursday.

A man is then seen walking toward the police, and an officer asks him if he owns the car. He responds “Yes,” and the officer quickly takes him into custody.

The man, later identified as 50-year-old Raul Carbajal, of Newport Beach, California, was charged with willful, malicious torture of an animal, according to police.

“Do you realize how hot it is outside?” the officer asks the owner while placing him in the police car.

As of Thursday, police said the puppy was still receiving medical treatment at the animal control center.

Police posted a stern warning for the public on social media: “DO NOT LEAVE PEOPLE OR ANIMALS IN HOT CARS. PERIOD.”

The department’s Facebook post of the incident received over 1,100 comments, with most people expressing exasperation over the pup’s ordeal and praising police for their efforts.

Authorities have also seen cases of children dying in hot cars on cooler days when outside temperatures reach only 70 F.

The number of hot car deaths among children have averaged nearly 40 per year, according to the national organization Kids and Car Safety, which tracks cases across the United States. So far, there have been 13 deaths reported in 2022.

A similar incident unfolded in New York City last month, but that one led to a heart-warming ending.

Police rescued a little canine that had been trapped inside a hot car on Manhattan’s Upper East Side for over two hours on June 18. The dog turned out OK and one of the officers who came to the pooch’s rescue recently adopted the dog.

Hot car, hot dog rescue—thanks to caring NYers who saw this pup locked in a car for over 2 hours & called 911!

Our cops responded discovering the car off, windows shut & distressed dog. They broke the window, got pup out & off to a vet for care. Criminal investigation continues. pic.twitter.com/B5MdVT6UUe