Punxsutawney Phil isn't the only famous groundhog: At least 6 other states have their own weather prognosticators

As Phil has grown in popularity over the years, so too has the sage advice of Freddie, Jimmy and Chuck - other groundhogs who have started popping up with their own predictions. Although this year, one beloved woodchuck will be missed.

Essex Ed, the weather-predicting groundhog at the Essex County Turtle Back Zoo, is seen in a cage during a Groundhog Day event on Feb. 2, 2018, in West Orange, New Jersey. (AP Photo/Julio Cortez)

Many people across the globe are familiar with Pennsylvania's Punxsutawney Phil as the main furry weather-predicting critter each Groundhog Day, which falls on Feb. 2.

However, Phil, whose full name is “Punxsutawney Phil, Seer of Seers, Sage of Sages, Prognosticator of Prognosticators and Weather Prophet Extraordinary,” isn’t the only notable groundhog whose shadow – or lack thereof – can predict an early spring or longer winter.

There are quite a few other notable weather-prognosticating woodchucks out there, hailing from Illinois to Wisconsin to Atlanta, including the groundhogs below: 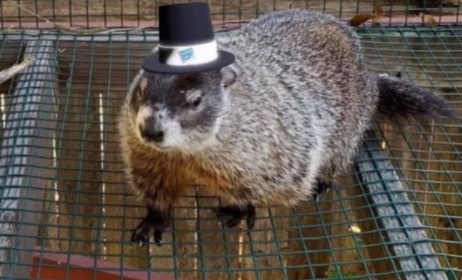 For years Milltown Mel in New Jersey had been one of the many groundhogs following in the footsteps of Punxsutawney Phil. In a strange turn of events, however, Mel unexpectedly passed away shortly before Groundhog Day 2022 and his handlers were forced to cancel the borough's annual ceremony.

"We Wranglers are sad to report that Milltown Mel recently crossed over the rainbow bridge," a post read on Mel's Facebook page. His caretakers didn't say when Mel died.

Now his "wranglers" are asking "Who is going to be the new Mel?"

"Mel left us at a tough time of year, when most of his fellow groundhogs are hibernating...so no babies will be available to replace him until this Spring," his caretakers said.

Mel lived on the property of a funeral home in the small community near New Brunswick. The former owners of the property said that they were inspired to start a Groundhog Day celebration in New Jersey after a visit to Punxsutawney in the 1990s, according to FOX5NY.

But Mel wasn't the only prognosticating groundhog in Jersey. There's still Essex Ed.

Essex Ed, the weather-predicting groundhog at the Essex County Turtle Back Zoo, is seen in a cage during a Groundhog Day event on Feb. 2, 2018, in West Orange, New Jersey. (AP Photo/Julio Cortez)

Further north, the resident groundhog at the Essex County Turtle Back Zoo in New Jersey joins some of his fellow groundhogs in making annual weather predictions on Feb. 2. Essex Ed has been predicting the mid-winter forecast since 1997.

He mentored under Punxsutawney Phil, but his predictions are his own, according to Essex County Turtle Back Zoo Director of Guest Services Caitlin Sharp.

"New Jersey weather is not always in line with Pennsylvania's, after all, and Ed could easily see his shadow while Phil does not, or vice versa," Sharp told AccuWeather.

Since the mid-2000s, Ed has also made predictions about which team will win the Super Bowl each year, adding a fun twist to the Groundhog Day tradition.

"He’s much better at predicting the weather than football, but in his defense, he hibernates through most of the sports season," Sharp said. 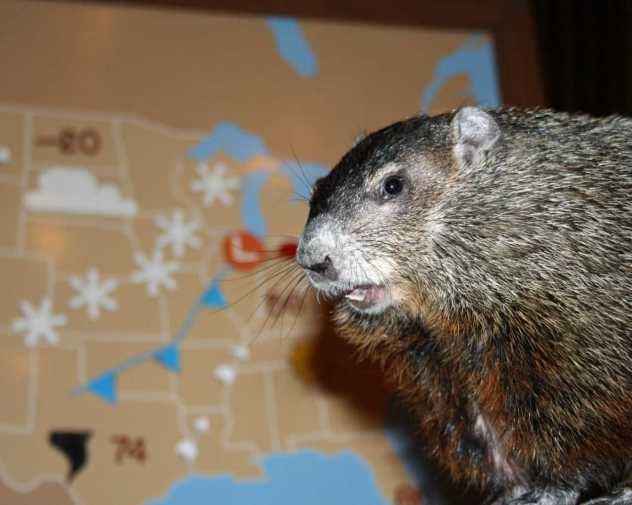 The Tennessee Aquarium has its own chief seasonal forecaster, known as Chattanooga Chuck. Chuck has made Groundhog Day predictions at the aquarium since Feb. 2, 2010.

Although the animal was acquired from a licensed wildlife breeder in Pennsylvania, Chuck has no relation to Punxsutawney Phil, according to Thom Benson, the Tennessee Aquarium’s director of external affairs.

Just as crowds await Phil’s prediction each year at Gobbler’s Knob, if Chuck sees his shadow on Feb. 2, there will be six more weeks of winter. If not, an early spring is expected. 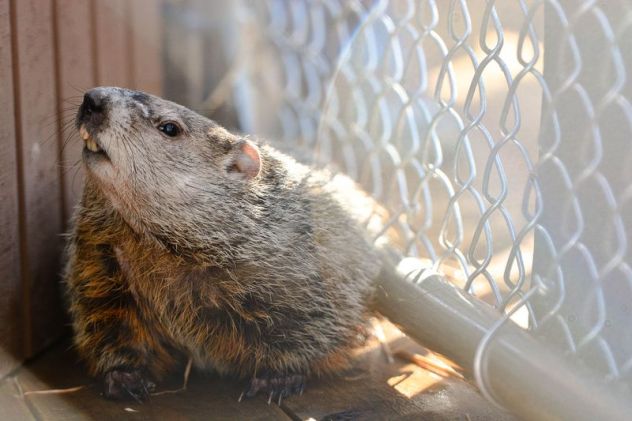 The center’s resident weather-predicting groundhog is French Creek Freddie, who, just like Phil, is summoned from his den every Feb. 2. His prediction of an early spring or longer winter also depends on whether he spots his shadow.

French Creek Freddie’s festival includes fun activities for attendees including a wood-chucking contest and a performance of a theme song written just for Freddie. 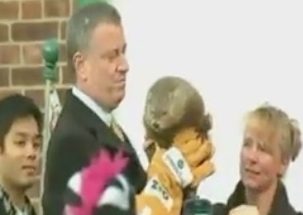 At the Staten Island Zoo, schoolchildren and elected officials usually cheer on Chuck as a curtain is pulled back at a glass enclosure containing the groundhog. 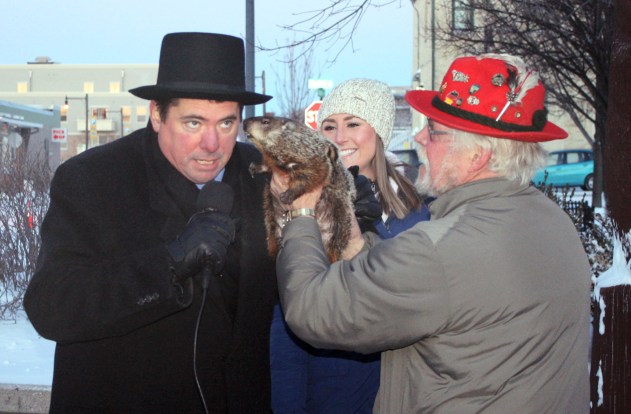 In this Feb. 2, 2015, photo, Sun Prairie Mayor Jon Freund, left, leans in for Jimmy's prognostication just before being bitten on the ear by the groundhog during the Groundhog's Day celebration in Sun Prairie, Wisconsin. (AP Photo/Christopher Mertes/The Star)

Residents of Sun Prairie, Wisconsin, have proclaimed the city as the “Groundhog Capital of the World” for more than 50 years, according to the city’s website.

Their weather prognosticator is Jimmy the Groundhog, who makes predictions of how much longer residents will have to endure wintry weather based on his shadow’s appearance each Groundhog Day.

Sun Prairie’s Groundhog Day tradition began in 1948, when Wisconsin artist Ira Bennett and his son created a series of postcards featuring different locations across the state and holidays observed throughout the year. This was part of the commemoration of Wisconsin’s centennial year, according to the City of Sun Prairie.

Bennett reportedly chose Groundhog Day for Sun Prairie because “the groundhog sees his shadow when the sun comes up on the prairie; thus, Sun Prairie.”

Although his weather prognostications are said to often miss the mark, Ohio’s Buckeye Chuck, who is a resident of the town of Marion, has been predicting whether or not six more weeks of winter are in store since the 1970s. Buckeye Chuck typically hibernates from September to April but emerges on Feb. 2 to make his prediction. The Ohio Legislature designated Buckeye Chuck as the state's official groundhog in 1979, according to Cleveland.com.

Of course, as the average lifespan of a groundhog is six years, it’s likely that many groundhogs have played the role of Buckeye Chuck in the past few decades.

Drone footage shows spectacular view of ghost town frozen in time
When the skies went dark: Historians pinpoint the very 'worst year' ever to be alive
Bible found opened to Psalm 106 and 107 one of few objects to survive deadliest fire in US history
Ice-covered ship draws crowd as it unloads cars encased in frozen seawater