Sam to continue rapidly strengthening into Category 4 storm. Get the forecast on where it will track next.

No break in sight for rain-weary central US with more downpours, severe weather on the way

Severe weather hit the area around Dallas, Texas, with incredible fury on June, 16. Rain came down so fast, that this home lighting system was tricked into thinking it was night.

An active weather pattern will bring several more days of flooding rainfall and severe thunderstorms to central portions of the country.

Storm after storm will emerge from the Colorado Rockies this week and track through the Plains before sending rain into the Ohio Valley and Northeast.

This persistence of storms will bring rounds of heavy rain over the same areas through the middle of the week.

"Areas that are forecast to be hit the hardest include northern Texas, Oklahoma, Arkansas and southern Missouri," said AccuWeather Meteorologist Kyle Elliott. 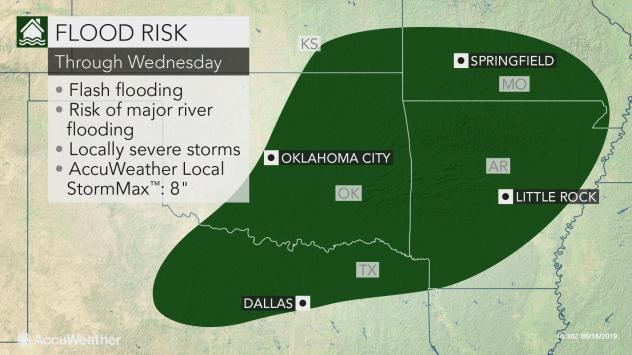 Cities such as Oklahoma City, Dallas, Little Rock and Springfield, Missouri, could have rainfall totals of 4 inches to as much as the AccuWeather Local StormMax&trade; of 8 inches through Wednesday.

Several other cities, although out of this heaviest corridor of rain, will see plenty of wet weather over the coming days. St Louis, Indianapolis, Paducah, Kentucky, and Nashville will also have waves of heavy rain into midweek.

The already soggy growing season has caused agriculture delays for many across the central U.S. and the Midwest. The addition of more rainfall in the coming week could have farmers running out of time to plant many types of crops.

Those traveling will also want to keep an eye on the sky through midweek.

The heavy downpours could bring streams over local roadways, as well as reduce visibility for drivers. Motorists, especially those on higher-speed roadways such as I-30, I-35, I-40 and I-44, should keep this in mind. 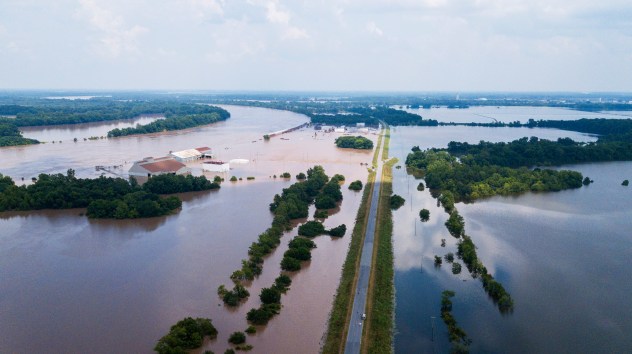 This aerial photo shows flooding along the Arkansas River in Pine Bluff, Ark., Tuesday, June 4, 2019. Since then, water levels on much of the Arkansas, including Pine Bluff have fallen below flood stage. (Photo/DroneBase via AP)

"Since water levels have recently fallen along many of the major rivers in the region, such as the Arkansas and middle Mississippi, an immediate rebound in river flooding is not likely," according to AccuWeather Senior Meteorologist Alex Sosnowski. 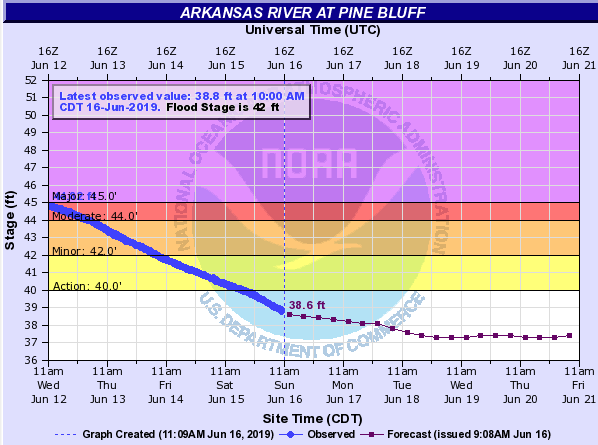 "However, we will have to watch how much and how often rain falls on these watersheds and others for a potential response from the rivers in the form of renewed flooding as the month progresses."

Accompanying the heavy rain across the center of the country will also be the threat for severe weather.

There were several reports of tornadoes in Illinois, Indiana, Texas, Missouri, North Dakota, Iowa and Indiana at the start of the weekend. The confirmed tornadoes have mostly damaged areas in Indiana and Illinois, according to the NWS reports, damaging not just trees and power lines, but also homes as well. 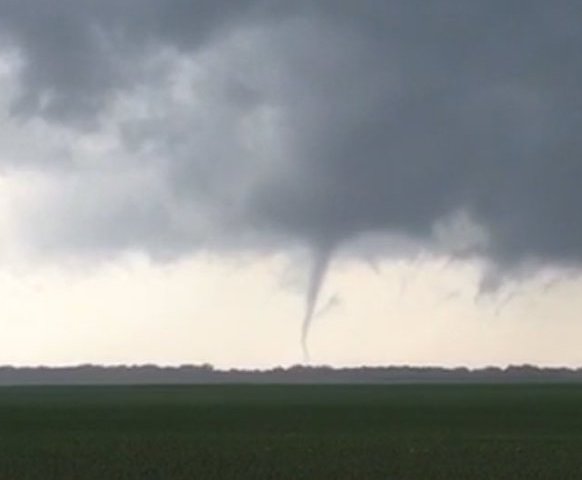 A tornado north of Sawyerville, Illinois, tore up trees and damaged at least one house according to the National Weather Service. (Twitter/@AceJachino)

The main area of severe thunderstorms will stretch from the Ohio Valley to the mid- and lower-Mississippi Valley through Tuesday.

However, heavy, gusty and even brief severe thunderstorms can extend beyond this swath.

The main threats with these thunderstorms will be drenching downpours, hail and damaging winds. Isolated tornadoes are also possible.

6 tips to help prepare for a flood, minimize damage to your home
7 lightning safety tips if you’re caught outside during a thunderstorm
In case you missed it: Crane crumbles amid severe weather in Dallas, killing 1; Fired TV meteorologist sparks change
Repeating downpours to create dangerous flooding risk from Ohio Valley to mid-Atlantic

"The storm evolution could be rather disorganized with multiple clusters of storms in this region moving in different directions," added Vido.

Sunday afternoon, strong winds reaching up to 66 mph around Fort Worth, Texas, caused damage to homes and trees. As of early Monday morning, there have been no reports of injuries or fatalities.

Residents spending time outdoors should be prepared to take shelter indoors should they hear thunder. If you are able to hear thunder, you are close enough to a thunderstorm to be struck by lightning.

Just earlier this week, two teens in Pennsylvania were killed when a bolt of lightning struck near them while they were outside fishing. So far in 2019, the total of reported lightning-related deaths stands at four.

A small adjustment in the jet stream later in the week could lead to a brief break for some locations. However, frequent storms will continue to track from the Pacific Northwest to the Atlantic coast, bringing more chances for rain.

Download the free AccuWeather app to see how much rain is anticipated in your community and to remain abreast of the latest flood advisories. Keep checking back for updates on AccuWeather.com and stay tuned to the AccuWeather Network on DirecTV, Frontier and Verizon Fios.

Subtropical Storm Teresa rises from the ashes of Peter