Mysterious skull identified after washing up on New Jersey beach

After a storm rolled up the coast ahead of Memorial Day, authorities found the rough surf had left behind a mysterious parting gift that some thought resembled a long-extinct dinosaur.

A massive skull washed up on the shores of Island Beach State Park, New Jersey, on Memorial Day, which would later be confirmed to belong to a minke whale.

Part of a massive animal skull washed up on a New Jersey beach on Memorial Day 2021 after a storm passed through the area, and authorities have finally solved the mystery as to what it is.

On Tuesday, the Island Beach State Park, in Berkeley Township, New Jersey, posted photos on Facebook of a massive skull with a beak shape some found to be reminiscent of a long-extinct dinosaur.

"That's where my Pterodactyl head went!!" one person joked in the comments.

The park sits on a narrow barrier island that stretches for 10 miles between the Atlantic Ocean and the Barnegat Bay. Atlantic City lies about 20 miles directly to the south, though about 45 miles by car.

"You never know what you are going to find on the beach after a storm!" The New Jersey Department of Environmental Protection said in a post with the photos over Twitter. 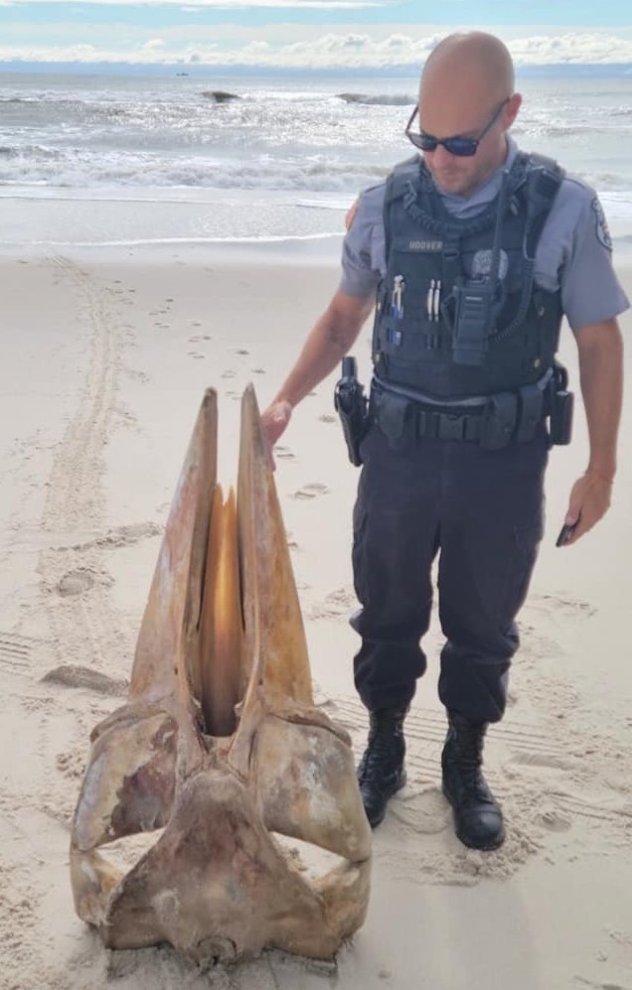 A storm had moved up the Eastern Seaboard on Sunday, May 30, 2021, creating damp and dreary conditions for much of the region ahead of the holiday weekend.

"The day before Memorial Day was wet and chilly with rain much of the day," AccuWeather Senior Meteorologist Carl Erickson said. "The storm moved away by the night of May 30, and Memorial Day itself turned out nice with sunshine and warmer temperatures."

The state park is located on the central New Jersey coast about a one-hour drive north of Atlantic City.

After asking for guesses on what creature the mysterious parting gift from the storm could belong to, the New Jersey Department of Environmental Protection and the Island Beach State Park confirmed that it was the ventral, or lower, jaw and skull of a minke whale.

A little girl walks past a life-size photo of an adult female minke whale at a photo exhibition in Tokyo, Saturday, Dec. 11, 2010, titled "Eye to Eye with the Whale : New Tales about Whales" by California-based photographer Bryant Austin who has produced the world's first life-size photos of whales. (AP Photo/Koji Sasahara)

Minke whales are a part of the rorquals, a family that includes both humpback whales and the blue whale. They are also considered the second smallest baleen whale, behind the pygmy right whales. Adults can typically reach up to 23 to 26 feet in length and weigh around 4 to 5 tons.