Meteor shower known for brilliant fireballs to peak this week

In an unlikely turn of events, a door camera in Fullerton, California, had the perfect vantage point to capture a meteor as it streaked through the night sky on Nov. 1.

Just hours after one of the biggest astronomy event of the year, stargazers will be looking to the heavens for incredibly bright meteors known as fireballs.

On the night of Monday, Nov. 11, into the early hours of Tuesday, Nov. 12, the Northern Taurid meteor shower will reach its peak. This is the second shower of the season that is sparked by debris left behind by Comet 2p/Encke, the first being the Southern Taurids with peaked back in October.

Similar to its counterpart, the Northern Taurids is a minor meteor shower, bringing around only five meteors per hour. However, some of the meteors could be spectacular.

“The Taurids are not known for their high numbers, rather they are known more for the fireballs they produce,” the American Meteor Society (AMS) states on its website. “We invite you to try and witness some of this activity before the nights become bitterly cold.”

The Northern Taurids are named after the constellation Taurus, located in the same part of the sky as the meteor shower’s radiant point. However, shooting stars will be able to be seen in all areas of the sky, not just near the radiant point.

“Although Taurid meteors can be seen all night long from the Northern Hemisphere, they are best seen when the radiants lie highest in the sky,” the AMS said. This occurs after midnight local time. 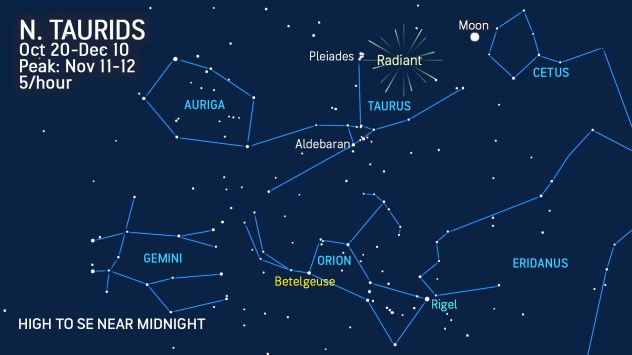 The best viewing conditions on Monday night are expected from the coast of Central and Southern California to the western Great Lakes where mainly clear weather is in the forecast.

Although light pollution is bad for viewing meteor showers, any fireballs that flash in the night sky will be bright enough to be seen in cities such as San Francisco, Phoenix, Las Vegas, Denver and St. Louis.

A far-reaching storm system will spread clouds across much of the eastern and southern United States on Monday night, obscuring the meteor shower for people across the region. Disruptive clouds are also in the forecast for most of the Pacific Northwest, southern Alaska and some of the Hawaiian Islands. 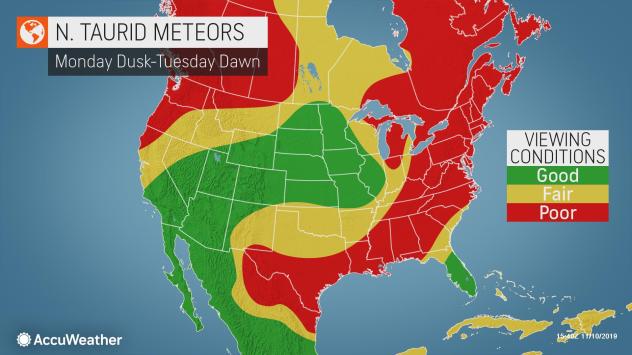 A few nights after the peak of the Northern Taurids, a more impressive meteor shower will reach its climax.

The night of Nov. 16 into the early morning of Nov. 17 will feature the Leonids, a meteor shower that brings around 15 meteors per hour.

Following the Leonids, stargazers will need to wait until mid-December for the next opportunity to see a meteor shower.