Maine to New Brunswick, Canada, at risk for rapid snowmelt and flooding from storm to end week

As a cold snap wanes in the Northeast, ice jams are forming in the Connecticut River.

A combination of factors may come together to unleash a rapid flooding event across central and southeastern portions of Maine, New Hampshire and New Brunswick into Friday night.

Flooding is a concern even though the storm began as snow or a rain and snow mix and may end as the same.

Heavy rain, frozen ground, above-freezing temperatures and a deep snowcover in the region may be enough to trigger dangerous and damaging flooding.

The rain and rapid thaw will be unleashed by a rapidly strengthening storm.

Since average temperatures across much of this region have been close to or below the freezing mark much of this month, the ground has not had a chance to thoroughly thaw.

An anticipated 1-2 inches of rain is forecast to fall on the region. Much of this rain may fall in 12 hours or less. 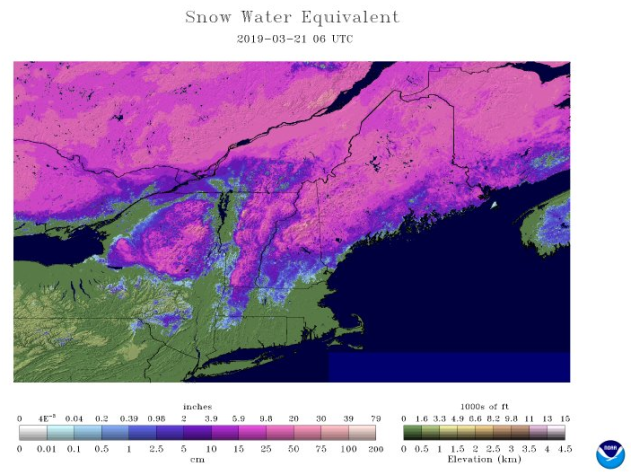 This image shows the amount of water locked up in the existing snow cover over the northeastern United States as of March 21, 2019. Since the temperature of the snow in central and southeastern areas is within a few degrees of freezing, it may melt quickly during a heavy rain event. (NOHRSC / NOAA)

Even if only part of that snow melts, it may have the effect of releasing 2 to 5 inches of rain in quick fashion over the frozen landscape. This water would quickly run off into area streams and rivers.

"Where the streams and rivers are frozen over or clogged with ice, you have a complicating factor," according to AccuWeather Senior Meteorologist Joe Lundberg.

Ice jams may substantially add to the flooding problem by causing water to build upstream and where the jam breaks release a surge of water downstream. 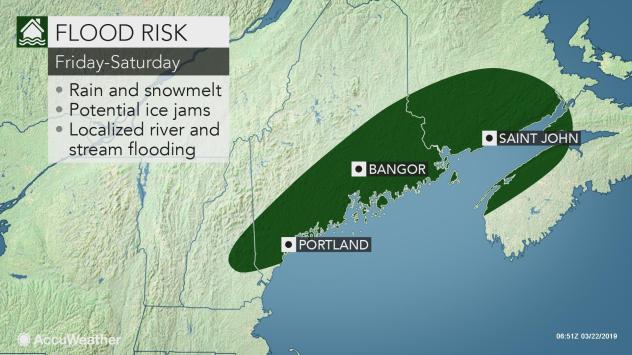 "It could end up being a flood on par with that of the central Plains, but on a smaller, localized and shorter-term scale," Lundberg said.

"At this time, we expect the atmosphere to remain cold enough for all or mostly snow over the northwestern parts of Maine, New Hampshire and New Brunswick."

Cold air and snow in the mountains with this storm would prevent a total meltdown in the region. In which case, a major disaster is likely to be avoided. Even where some rain falls into the deepest snowcover, that snow may absorb much of the rainfall like a sponge.

Only if the storm tracks farther inland and pulls warm air and rain into these areas would a very serious and widespread flooding event unfold. The additional snow or added water into the snowcover may continue to add to the flooding risk in the coming days and weeks.

At the very least, motorists should anticipate flooded roads from Friday into Saturday. Some small communities or homes in rural areas may be cut off until waters recede.

Major storm slamming Northeast with strong winds, flooding rain and snow
Cold, powerful winds to impact northeastern US into Saturday following major storm
Rising rivers to put more communities at risk of flood disaster in central US
The devastation from these 2 catastrophic 2018 Atlantic hurricanes was so intense, their names will never be used again

As the storm moves along, colder air and some snow will push back toward the coast, which will truncate the thaw. However, it may take until later Saturday until the colder weather has an effect on the runoff.

In areas that were flooded, ice may form and be difficult to remove as temperatures plummet Saturday night.

Over the next several weeks, due to the depth of the snow on the ground from northern New York state to northern Maine, significant flooding and ice jams are likely as snow melts and episodes of rain fall on the region.

Download the free AccuWeather app to get the latest on the forecast rapidly strengthening storm for the Northeast and its consequences.