Is it helpful to name a weak storm such as Andrea? 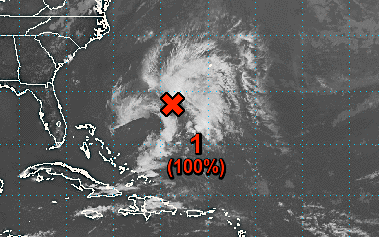 The short, uneventful life of Andrea, the first named storm of the 2019 Atlantic hurricane season, recalls the philosophical thought experiment that intrigued the likes of Albert Einstein, among others: If a tree falls in the forest and no one is around to hear it, does it make a sound?

And if an extratropical storm forms over the ocean and no one is around to notice, is it really a storm?

For Andrea, “If there was not a plane there [from the Air Force Reserve collecting data], we would not have seen flight-level winds of 40-45 knots,” said AccuWeather Hurricane Expert Dan Kottlowski. “So, it probably would not have been named.”

There are more named storms now than in the past because of improved technology leading to greater detection of storms.

"Having widespread remote-sensing capabilities has enabled us to determine more storms that are just spinning in the middle of the ocean," Jeff Weber told AccuWeather. Weber is an atmospheric scientist with the National Center for Atmospheric Research. "Without a ship report or something like that, we would not have been aware of those storms."

So why name a storm that will have little to no impact?

"It was a subtropical storm -- not even a tropical storm -- it had just 40 mph winds, it was weak and disorganized, and the storm had virtually no chance of developing into a hurricane," said AccuWeather founder and CEO Dr. Joel N. Myers, who is highly supportive of the National Hurricane Center (NHS) but critical on this issue.

"Why name the storm?" wondered Myers. "Because naming it potentially takes away from the public's preparedness for other storms. That's the potential harm it does."

Prior to 2002, subtropical storms were not given names, according to NHC communications and public affairs officer Dennis Feltgen. But the NHC was still issuing forecasts and warnings on them similar to those for tropical storms.

Andrea, which was located roughly 290 miles to the southwest of Bermuda, is a good example of a storm that likely would have gone undetected before the launch of the first meteorological satellite in 1960. It organized into a subtropical storm with maximum sustained winds of 40 mph late Monday, producing rain showers, wind and rough surf in Bermuda and, less than 24 hours later, was downgraded to an extratropical storm and was no longer considered an organized tropical system.

"They have many worse winter storms than this every year,” said Kottlowski.

In 1953, the U.S. abandoned a confusing two-year old plan to name storms by a phonetic alphabet (Able, Baker, Charlie) and began using female names for storms. The practice of naming hurricanes solely after women came to an end in 1978 when men's and women's names were included in the Eastern North Pacific storm lists and in lists for the Atlantic and Gulf of Mexico in 1979.

Still, the criteria for naming storms has varied over the decades. "There was considerable inconsistency in the '50s, '60s and '70s," Kottlowski said. "The inconsistency occurred when the NHC went from calling a subtropical storm a tropical storm due to the lack of data and consistent reconnaissance."

“More than 60 years ago, there was no satellite coverage over much of the areas where hurricanes developed,” said Myers. “So, some storms developed and died without anyone knowing it. When you compare the number of hurricanes based on how many named storms there were, keep in mind this in itself is not a sign of climate change. This is a sign of increased technology of detection.”

The Atlantic hurricane season officially will begin June 1. Andrea marks the fifth consecutive year with a named storm in the Atlantic basin before the official start of the season, according to Brian McNoldy, a senior research associate at University of Miami's Rosenstiel School.

“May storms are rare because in the past, we did not even look for tropical storms and hurricanes until July,” Myers said. “Often there were storms that may have had tropical storm characteristics but since it was not part of hurricane season, they were not even named.”

AccuWeather’s 2019 predictions have not changed since the initial forecast was released on April 3, as AccuWeather forecasters continue to call for 12 to 14 tropical storms this season. Of those, five to seven are predicted to reach hurricane strength and AccuWeather predicts two to four of these will become major hurricanes.

In 2005, there were a record 28 named storms and, for the first time, the Greek alphabet had to be used for six of the storms since the normal list of names had been used. This year, 21 names are on the Atlantic storms list, with Barry next and Wendy at the end (not all letters of the alphabet are used).

But an early start to the Atlantic season is no guarantee Wendy will be needed. “Early season development like this does not portend what the rest of the hurricane season will bring, especially since this was a weak storm," Kottlowski said.

Download the free AccuWeather app to stay on top of development in the tropics throughout the globe. Keep checking back for updates on AccuWeather.com and stay tuned to the AccuWeather Network on DirecTV, Frontier and Verizon Fios.