How are US bridges built to withstand powerful winds, hurricanes and earthquakes?

Of the more than 614,000 bridges standing in the United States, many face the threat of damage from earthquakes, high winds and hurricanes.

Engineering experts fully understand the potentially devastating impacts, not only to the structures themselves, but also to the lives of people who cross them regularly.

“In the U.S., we have design standards, many of them written the American Society of Civil Engineers, and engineers have to follow those standards as they design structures for extreme loading,” said Dr. Andrew Whittaker, Director of the Institute of Bridge Engineering at the University at Buffalo.

The American Association of State Highway and Transportation Officials (AASHTO) provides guidelines for bridge design against extreme events, and these standards vary by each event, Whittaker said. 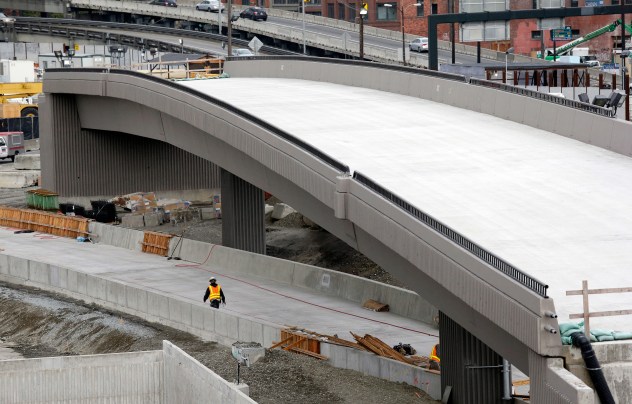 In this photo taken Tuesday, Sept. 19, 2017, a worker walks under a portion of a new off-ramp for Highway 99 in Seattle. The off-ramp has a type of column that flexes when the ground shakes in an earthquake, then snaps back to its original position so that the structure not only survives a quake without collapsing, but also sustains so little damage that it can be used immediately. (AP Photo/Elaine Thompson)

Any flaws in design can result in a bridge collapse. In 1971, at least a dozen bridges buckled onto freeway lanes in California’s San Fernando Valley during a 6.6 magnitude earthquake, killing two of the 64 earthquake victims.

When such events occur, engineers examine what went wrong to improve design standards and strengthen future and existing bridges.

“California learned in 1971 that earthquakes would shake bridges off their support piers,” said Dr. Michael Chajes, professor of civil and environmental engineering at the University of Delaware.

“After that happened, if you drive around California and look under the bridges, there are metal restrainer cables tying the bridges down to the support piers so they can’t fall off like they did,” Chajes said. “We also saw a lot of columns fail [during that earthquake], because we didn’t understand at that point the effects that earthquakes would have on them.”

During 2005’s Hurricane Katrina, engineers discovered the phenomenal impact that waves can have on bridges, according to Chajes. Some bridges in New Orleans were significantly damaged or destroyed by moving water.

“Now, people are running models to see how big the wave forces are that might hit a bridge from the side in the event of a hurricane,” Chajes said. He noted that another solution to prevent wave damage is building bridges high enough so that the largest wave expected would never hit the bridge.

“The basic construction materials for bridges are high-string steel, carbon steel and concrete, but there are some modification devices that can be used to mitigate the effects of extreme loadings,” said Whittaker.

A key component in bridge design is to include backup systems in the design, according to Chajes.

“An analogy I’ve used is when you’re flying in an airplane, you don’t want things to go wrong,” he said. “The component you really don’t want things to go wrong with is the engine, and airplanes are designed to be able to fly with one engine. Even if it started out with four engines, in theory, if three of them went bad, the fourth one would still be enough for the pilot to land safely.”

A cable-stayed bridge is built with many diagonal steel metal stays that support the roadway. “Today’s cable-stayed bridges are designed so that you can take any one of those stays out of service, and the bridge would still be fine because there are so many of them,” Chajes said. “It’s very redundant, it’s very resilient.”

“We try to design it so that it won’t collapse, but it may sustain a little bit of damage,” he added.

5 of the most powerful, destructive hurricanes in Florida’s history
How powerful earthquakes can trigger deadly, destructive tsunamis
Preparing in advance of a tsunami can save your life
Why you should evacuate ahead of a hurricane
Is there a relation between fewer Atlantic hurricanes and more Pacific typhoons?

For testing how bridges will hold up against waves or strong winds, engineers construct a model and place it inside of a wind tunnel to ensure that it withstands the biggest hurricane winds that they expect could ever occur.

Earthquake engineers build shake tables on which they test models and can simulate an earthquake’s trembling.

“We also have ways of modeling bridges with computers, and those models can have wind or earthquake forces applied to them,” Chajes said.

Older bridges in the U.S. designed to previous standards are most vulnerable and at greater risk of damage or collapse during an extreme natural event.

“While bridges rarely fall down, if we don’t maintain them, they certainly won’t be as good as they were the day they were built,” Chajes said.

Bridges in hurricane-prone coastal environments like Florida face the risk of potential deterioration due to their locations in corrosive saltwater environments.

“If they’ve deteriorated for any reason, you’d have to be very concerned with that,” Chajes said. “It’s really important to do proper inspections.”