5 of the most powerful, destructive hurricanes in Florida's history

Florida is known for its sandy beaches and breathtaking views, but it is also known for deadly hurricanes.

Hurricanes have caused casualties and damage in the tens of billions of dollars and displaced people from their homes. AccuWeather interviewed the Florida Division of Emergency Management to find out the top five worst hurricanes to hit Florida.

"The 1928 Okeechobee Hurricane was one of the deadliest Atlantic hurricanes on record. The hurricane made landfall near West Palm Beach as a Category 4 hurricane. It also is the seventh strongest hurricane to make landfall in the contiguous United States," Moscoso said.

The storm made landfall on Sept. 16.

"I think the Okeechobee Hurricane would rank as the worst due to the loss of life and the disaster it created causing the massive flooding from the lake," Kottlowski said.

There were over 2,500 fatalities in Florida, most of which were drownings from Lake Okeechobee. In the town of Belle Glade alone, 611 fatalities were reported.

"As the hurricane crossed the lake, the dike on the south side of the lake failed, covering hundreds of square miles with water up to 20 feet deep," Moscoso said.

After the storm finished crossing the lake, the winds shifted out of the south, causing the dikes on the north shore of Lake Okeechobee to fail. Moscoso said nearly all houses and crops were destroyed around Lake Okeechobee. 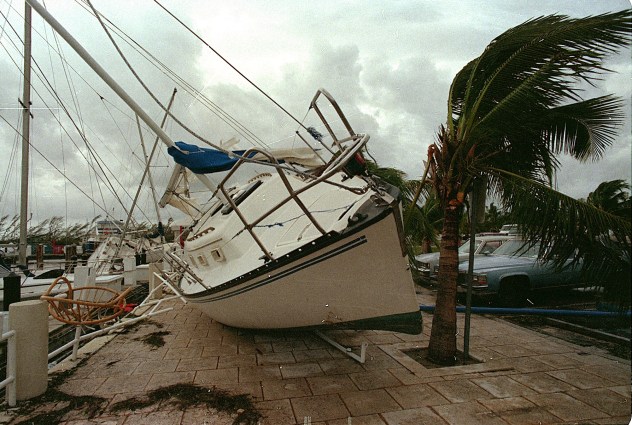 In this Aug. 24, 1992 file photo, a sailboat sits on a sidewalk at Dinner Key in Miami after it was washed ashore by Hurricane Andrew. (AP Photo/Terry Renna, File)

Hurricane Andrew is the most recent Category 5 hurricane to make landfall in the United States. Maximum sustained winds were estimated near 165 mph at landfall on Aug. 24.

"In Florida alone, 25,524 homes were destroyed and 101,241 others were damaged. In Homestead, 99.2 percent of mobile homes were completely destroyed," Communications Director of the Florida Division of Emergency Management Alberto Moscoso said.

The storm tide was measured at nearly 17 feet at the Burger King International Headquarters, but most values were 4 to 6 feet in Biscayne Bay. Moscoso said 4 to 7 feet of storm surge was observed on the Southwest Florida coast.

Damage is estimated near $25 billion (1992 USD) in Florida alone. There were 44 fatalities were reported in Florida as a result of Andrew, 15 were direct and 29 were indirect. 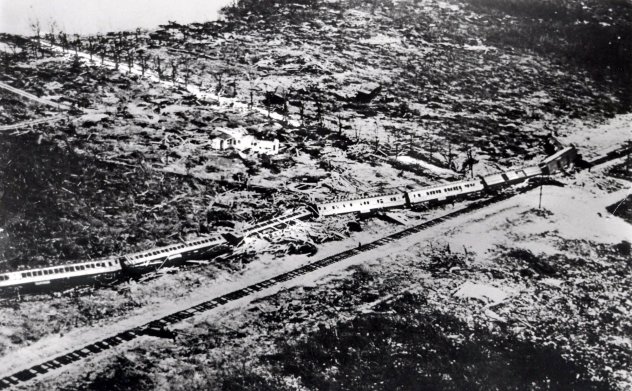 This September 1935 file photo shows the wreckage of an 11-car passenger train that was derailed by a Labor Day hurricane in the Florida Keys. (AP Photo, File)

"The Labor Day Hurricane of 1935 is the strongest hurricane to make landfall in the contiguous U.S. in terms of both pressure and wind," Moscoso said.

The maximum sustained winds at landfall were estimated at 185 mph. Storm surge was estimated near 18 to 20 feet in portions of the Keys.

"A total of 409 fatalities were reported in the Florida Keys, including 259 World War I veterans working a railway that would connect the Keys. Every building and tree on Matecumbe Key was reported to be completely destroyed," Moscoso said.

The 1926 Miami hurricane, commonly called the "Great Miami" hurricane, was an intense tropical cyclone that devastated the Greater Miami area in September 1926.

"When hurricanes track from south to north through Florida, they tend to cause more death and destruction. That was the case with the 1935 Labor Day, Great Miami and the Okeechobee hurricanes," Kottlowski said.

Totaling a $100 million U.S. damage toll that would be the second costliest in U.S. history when adjusted using inflation, population and wealth normalization, yielding a cost of nearly $196 billion U.S.

As a result of the destruction in Florida, the hurricane represented an early start to the Great Depression in the aftermath of the state's 1920s land boom. 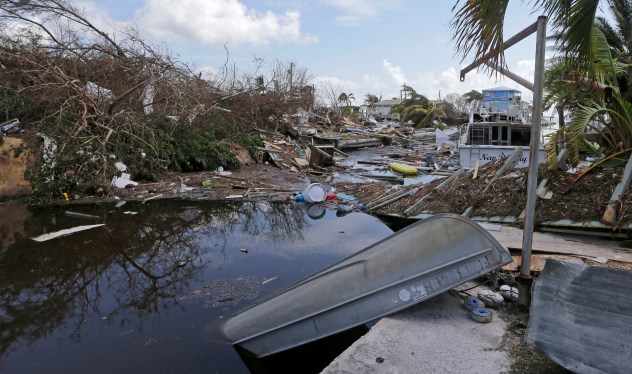 Hurricane Irma was a large and powerful hurricane that brought impacts to nearly the entire state.

Power outages from the wind were one of the most significant impacts from Irma with some one-third of Florida’s customers without power at the peak of the storm.

In addition to strong winds, high storm surge was observed in the Florida Keys and Southwest Florida. Storm surge values of 4 to 8 feet occurred in the Keys.

"In Southwest Florida, storm surge combined with the tide contributed to inundation levels of 6 to 10 feet between Cape Sable and Cape Romano. North of Marco Island, storm surge values of 3 to 5 feet were observed. The east coast of Florida was not spared from the storm surge," Moscoso said.

Moving to a hurricane-prone region? Ask these 3 questions before buying your home
Hurricane proof your yard with these expert wind-resistant tree planting tips
5 expert tips for protecting your home against hurricane damage

"Maximum inundation of 4 to 6 feet from storm surge was observed in Biscayne Bay in Miami-Dade County, with 2 to 5 feet reported all the way to the Florida-Georgia border. The St. Johns River experienced significant flooding due to a combination of storm surge, rainfall and a trapped tide," Moscoso said.

Heavy rainfall caused many flooding issues across the peninsula. Moscoso said rainfall totals of 10 to 15 inches were common across the Keys and peninsula with the highest total near Fort Pierce in St. Lucie County where 21.66 inches of rain were measured.

"There were seven direct deaths from Hurricane Irma and 80 indirect deaths. It is estimated that Irma caused nearly $50 billion in damage in the United States," Moscoso said.

Irma also produced 21 tornadoes in Florida, three of which were rated as EF2.

"The top five hurricanes even though so destructive and deadly are just a small part of the entire past hurricane history for Florida," Kottlowski said.