DC to feel almost as hot as Death Valley on Saturday

This story has been updated. This new story has the latest information on the heat and when cooler air is forecast to arrive.

The northeastern United States will sizzle this week as summer heat builds to near-record levels in some places, with many metropolitan areas experiencing the hottest air temperatures of the summer so far as a heat wave envelopes a wide swath of the United States.

In the nation's capital, AccuWeather RealFeel® Temperatures on Saturday are forecast to reach 110 F, just 2 degrees shy of the RealFeel Temperature forecast for Death Valley, California, on the same day. 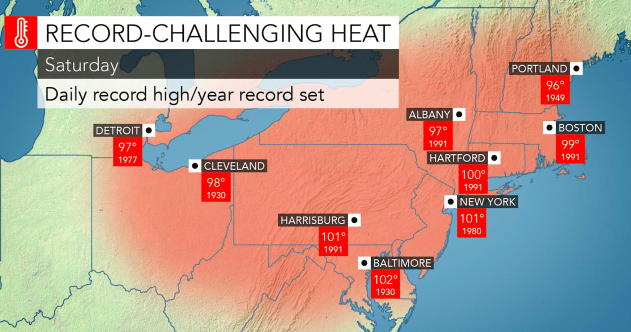 While actual temperatures will be higher in Death Valley, humidity levels will make it feel as hot or hotter than the Southwest in parts of the Central and Eastern states.

"The combination of sunshine, temperature, humidity levels and other factors will push RealFeel Temperatures well into the danger level past 105 degrees during the late morning and afternoon hours," AccuWeather Senior Meteorologist Brett Anderson cautioned.

On Wednesday, Philadelphia and New York City followed suit and declared emergencies due to the heat. According to a press release New York City Mayor Bill de Blasio's office, approximately 500 cooling centers have been activated around the city.

“Extreme heat is dangerous, period,” de Blasio said in a statement. “I urge all New Yorkers to exercise caution this weekend as temperatures near 100." He added, "We are deploying all resources at our disposal to ensure New Yorkers remain safe and cool during extreme heat.”

Intense July sunshine combined with a northward retreat of the jet stream will allow an impressive heat wave to build even for midsummer standards for many locations across the Northeast. 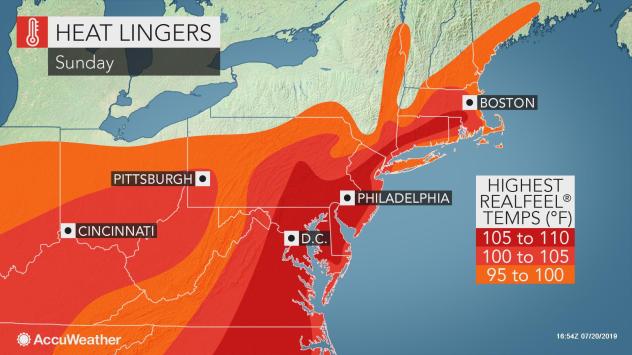 "Actual temperatures in some of the major cities, such as Washington, D.C., Baltimore, Philadelphia and New York City are likely to peak within a few degrees of the century mark at the peak of the heat wave this weekend," Anderson said.

At this level, temperatures will be 10-15 degrees above average even for the middle of the summer. 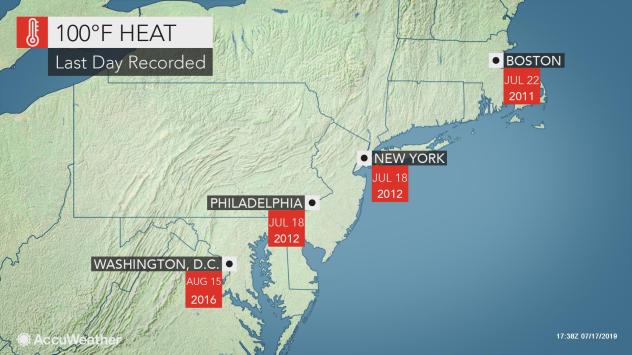 As hot as it will be this weekend in the New York City area, the Big Apple's all-time high temperature record of 106, set on July 9, 1936, is not in danger of falling.

With a forecast high of 100, Philadelphia could break its daily record high of 99 on Saturday. The RealFeel Temperature will be sweltering as it climbs near 110. The City of Brotherly Love hasn't recorded triple-digit heat since July 2012. 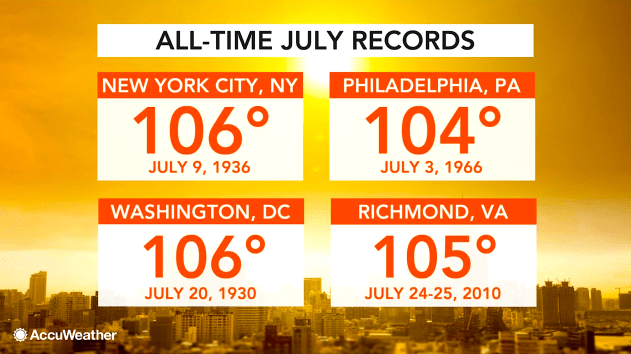 Other spots on the East Coast that will feel the heat and challenge records on Saturday include Richmond, Virginia, which is forecast to hit 101. Its record high for the day is 103. Most places won't set all-time or monthly heat records.

Heat exhaustion vs. heatstroke: What are the warning signs and how should you react?
More than 70 dogs rescued from Arkansas animal shelter after Barry’s rain triggers flooding
‘Ring of fire’ pattern to produce damaging, drenching storms in Midwest and Northeast

People should avoid strenuous activity during the peak of the heat and when the sun is high in the sky. Be sure to stay hydrated by consuming non-alcoholic fluids at regular intervals.

Heat kills more people on an annual basis than any other weather factor. 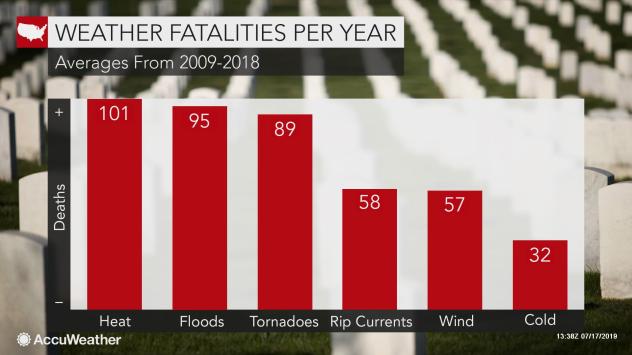 The temperature of paved and concrete surfaces can be dozens of degrees higher than the air temperature. Not only does this contribute to a buildup of excessive heat in urban areas, but it can also be a safety hazard.

Motorists on the highway are reminded to reduce their speed during extremely hot weather. Driving at high speed, excessive braking and weaving in and out of traffic during very hot weather can cause the tire temperature to exceed manufacturer's safety limits and lead to a blowout. 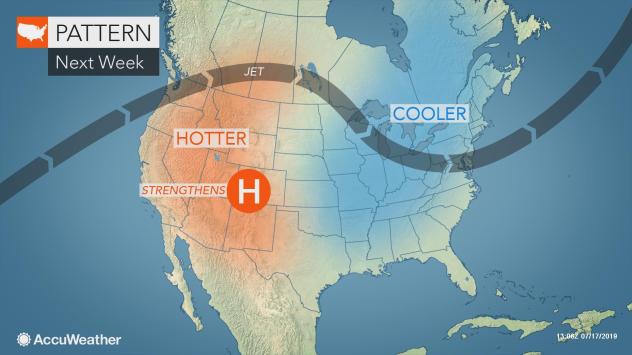 "Temperatures are forecast to throttle back to seasonable levels or even slightly below average for a time next week in the East as heat shifts to the western U.S.," Pastelok said. "There should also be a substantial drop in humidity in the Northeast next week."

Highs most days next week will range from the middle 70s over the higher mountains to near 90 in southeastern Virginia.