Here are the worst travel times for your 2019 Thanksgiving journey

With Thanksgiving right around the corner, AAA's Jeanette Casselano tells AccuWeather what days for travel will be the worst and what you should be prepared with before you go.

You may have a long list of things to be thankful for this year, but holiday traffic probably didn't make the cut. And with more than 55 million people expected to travel during the holiday week, it's quite likely you'll run into a few slowdowns during your trip. A barrage of weather factors all around the country on top of the heavy traffic will likely add to the misery for travelers.

AAA is projecting near-record travel volume on American roads this year since tracking began in 2000.

"This Thanksgiving we will see the most Americans carving time out to visit family and friends since 2005," said Ragina C. Ali, public and government affairs manager for AAA Mid-Atlantic, in a statement.

An additional 1.6 million Americans will travel compared with last year, good for a 2.9% increase. The majority of travelers, 49.3 million, will drive to their destinations; however, airlines have seen a 4.6% increase in travel volume during the Thanksgiving holiday.

And all of these travel woes will be exacerbated by very active weather patterns unfolding all around the nation over the next seven days. These weather patterns will bring heavy snow to the middle of the country, strong winds to the Northeast, drenching downpours to the southern U.S., and a powerful storm out West that will bring a mixed bag of elements including high winds, heavy rain, major snowfall and icy conditions.

To help motorists make the most out of their travels, AAA has compiled a list of the best and worst times to set out for holiday destinations. 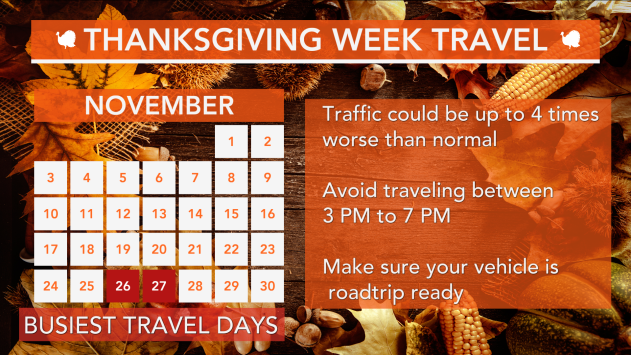 INRIX, a global transportation analytics company, expects Wednesday afternoon to be the worst travel period nationally -- the weather notwithstanding -- especially for the 49.3 million Americans traveling by automobile. Car trips are projected to take as much as four times longer than normal in major metro areas. Add in the host of weather factors and it could be even worse for many drivers.

If you plan on driving during the late afternoon or early evening around 5 to 7:30 p.m. in Atlanta, Los Angeles, New York, Boston, or Houston, your trip could take up to three-and-a-half-times longer than usual.

In San Francisco and Washington, D.C., traffic will start building up earlier than most cities, around 2 to 3 p.m. 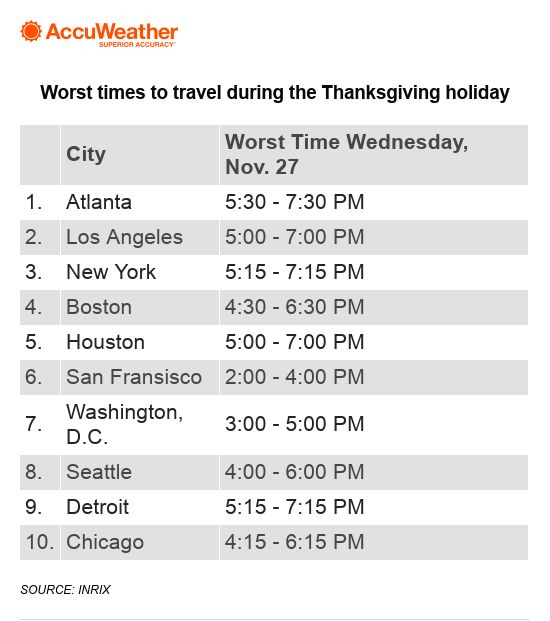 “With record levels of travelers, and persistent population growth in the country’s major metropolitan areas, drivers must prepare for major delays,” said Trevor Reed, transportation analyst at INRIX. “Although travel times will peak on Wednesday afternoon nationally, travelers should expect much heavier-than-normal congestion throughout the week.”

Whether you are traveling on the roadways or skies, AAA suggests packing your patience -- and we suggest staying glued to your AccuWeather app to stay apprised of the latest forecasts.

If you happen to get stuck in a traffic jam don't forget all of the things you have to be thankful for this holiday season.