Hurricane Lane is expected to hit Hawaii into this weekend. It is a rare hurricane that will actually impact the state. Why are hurricanes rare in Hawaii despite being in the middle of the Pacific Ocean? Let's find out.

Hurricane Erick and Tropical Storm Flossie will pose a dual threat to Hawaii from late this week into early next week. 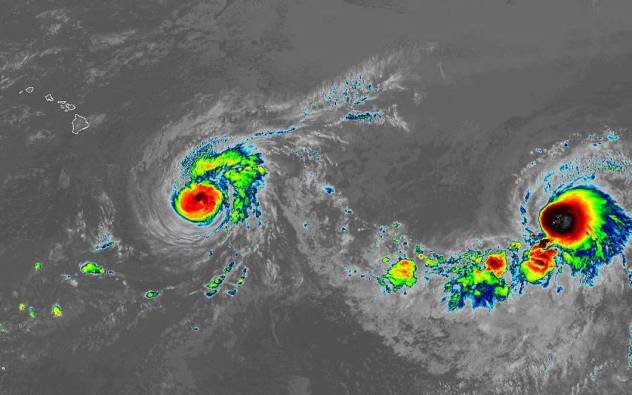 Hurricanes Erick and Flossie are seen in the open waters of the Pacific Ocean early Wednesday July 31, 2019. Erick is in the Central Pacific Basin while Flossie remains in the East Pacific. (Photo/NOAA GOES West)

As Erick continues westward late this week, it will encounter even stronger wind shear from Thursday until the time it passes just south of the Big Island on Friday and Saturday.

Erick will continue to lose wind intensity during this time and is likely to be a tropical storm during its closest pass to the Hawaiian Islands. 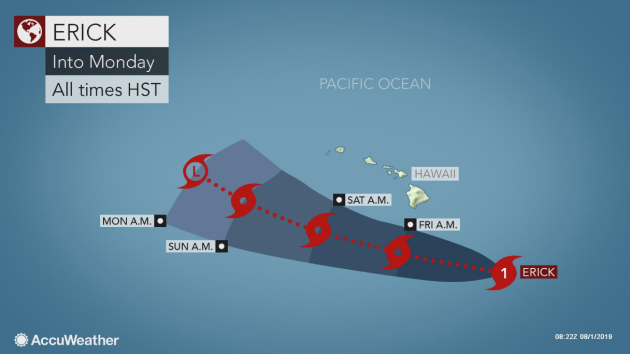 “As Erick passes to the south of Hawaii, rough surf and increased rip currents will impact the Big Island,” according to AccuWeather Senior Meteorologist Carl Erickson.

Large swells will also batter the east-facing beaches of the Big Island beginning at midweek and continuing through the start of the weekend.

“The highest surf will be along beaches exposed to the open ocean, and rough surf may expand to south-facing shores as Erick passes by,” AccuWeather Meteorologist Renee Duff said.

Surfers and swimmers should use caution and stay out of the water if at all possible. Be sure to know how to safely escape the grip of a rip current if you decide to venture into the turbulent waters.

In addition, Erick will also infuse tropical moisture into the Big Island, resulting in enhanced showers and thunderstorms that could trigger isolated incidents of flash and urban flooding.

While the heaviest rain is expected to remain in the windward areas of the Big Island, heavy showers are likely to spill over onto the western side of the Big Island as well. These areas do not typically receive rain in the absence of a tropical system. 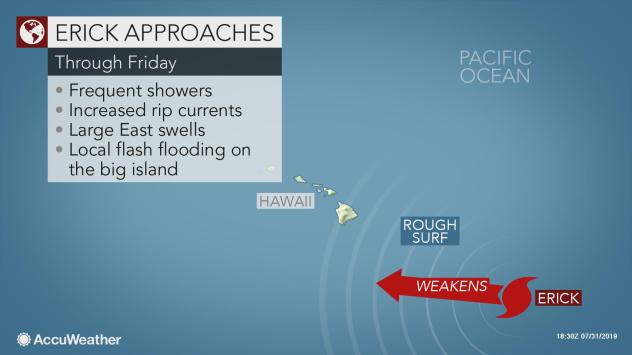 "Those with interests in Hawaii should monitor the progress of Erick this week," Erickson said.

In the wake of Erick, Flossie may track even farther north and bring another round of unsettled weather to the islands early next week.

Current indications continue to suggest that Flossie may either pass directly over the islands or just to the north. 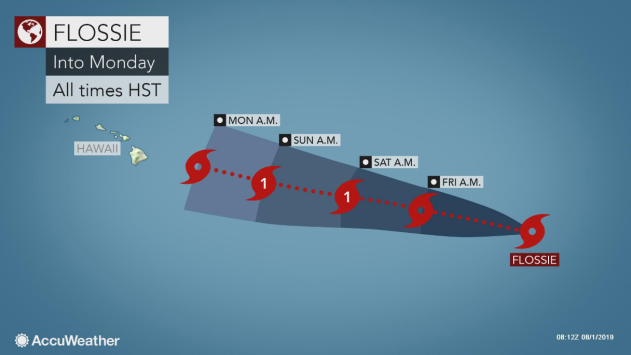 "Environmental conditions will be conducive for Flossie to restrengthen as it moves in a general westward motion over the open waters of the East Pacific," AccuWeather Senior Meteorologist Rob Miller said.

Similar to Erick, Flossie will likely diminish in intensity before reaching Hawaii.

However, another round of enhanced rip currents, rough seas, showers and thunderstorms appears likely and may impact more of the island chain than during Erick’s closest approach.

“The island chain will likely be subject to even more tropical threats in the coming months as AccuWeather meteorologists expect an above-normal hurricane season in the Eastern and Central Pacific,” Duff added.

Thundersleet reported in Texas and Oklahoma