Florida got some unexpected spookiness early in the morning, on March 31, when a green glowing meteor descended into the state. This video from Gainesville, Florida, is just one of many showing off the "green fireball."

The sky turned green over the southeastern United States on Saturday night when a bright fireball burned up in the night sky.

Over 200 people from Florida, Alabama, Georgia and South Carolina reportedly saw the fireball flash in the night sky, according to the event page from the American Meteor Society (AMS). 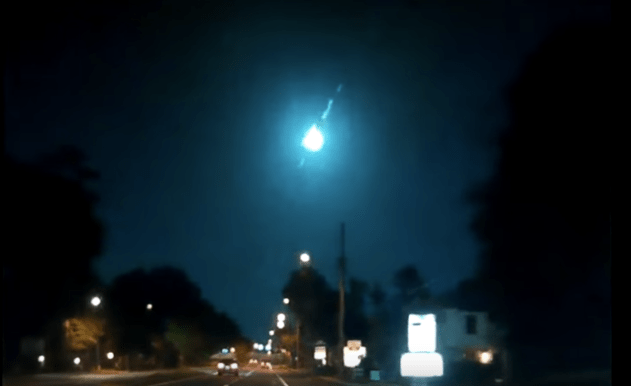 The meteor burned up while entering Earth’s atmosphere just east of Tallahassee, Florida, according to the AMS report.

The glow from the burning meteor was so bright that it created shadows for several seconds before the light flickered out.

It is unknown if the meteor reached the ground, or if it completely burned up in the atmosphere.

Events like this are not particularly rare, but they are significantly brighter than the standard meteor during a meteor shower.

Early on March 29, 2019, over 300 people saw a fireball that streaked over eastern Tennessee. The glow was seen by people across the entire region.

On Feb. 1, 2019, a meteor exploded over western Cuba with some fragments reaching the ground. No injuries were reported, but the explosion was heard as far away as southern Florida.

Light from a fireball late Saturday night can be seen on this video from Crawfordville, Florida.☄️

Just witnessed a meteor while driving home from Florida..... ONCE in a lifetime thing. I am thriving

I didn't catch the Florida fireball directly, but my cameras did catch the flash #meteor pic.twitter.com/nL6bNCCtEq