A four-alarm warehouse fire broke out early Saturday morning, May 23, on Pier 45 in San Francisco, California.

San Francisco firefighters responded to a four-alarm fire at a warehouse on Pier 45 at Fisherman's Wharf in San Francisco on Saturday morning, the San Francisco Fire Department (SFFD) said.

A total of 145 firefighters responded to the scene, located at Taylor and Jones streets after the fire erupted sometime before 4:40 a.m. PDT. A quarter of the pier has "been lost to the flames," SFFD officials said, while the warehouse, where the fire was sparked, "is a “total loss,” KGO-TV reported.

The situation "evolved rapidly" from a one-alarm fire to a four alarm, San Francisco Fire Lt. Jonathan Baxter told KGO-TV. Evacuations were underway at adjacent commercial warehouses during the fire, and fire crews were evacuated when walls began collapsing in the warehouse, Baxter reported.

“It was dry at the time of the fire with light winds at the airport, roughly 5-10 mph. However, the airport is not extremely close in proximity to Pier 45 where the fire erupted,” AccuWeather Senior Meteorologist Dan Pydynowski said. 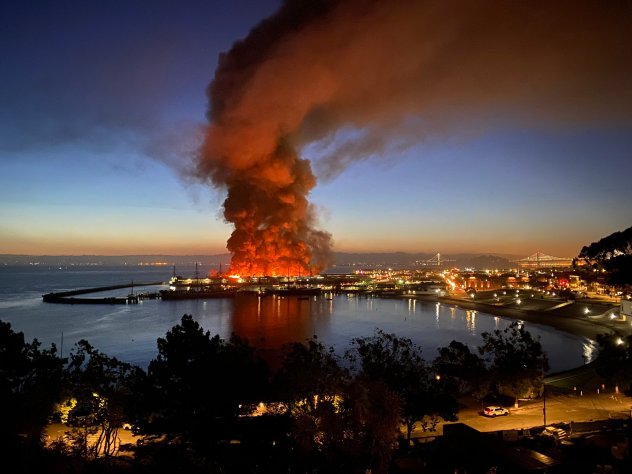 Firefighters battling the four-alarm fire as the sun rises in San Fransisco on Saturday morning. Image via Twitter/dwhly

The fire was considered contained as of 11:30 a.m. PDT, but firefighters are expected to remain on the scene through the holiday weekend to monitor hotspots.

Stronger winds kicked up over the Bay Area on Saturday afternoon and placed the pier in danger of further damage.

"Wind gusts at the airport were in the range of 30 to 35 mph just hours after the fire was contained," AccuWeather Meteorologist Mary Gilbert said.

The SS Jeremiah O'Brien ship was also threatened by the fire as well as other structures. The O'Brien ship is one of two remaining fully functioning Liberty ships launched during World War II. Specifically, the ship is a rare survivor of the fleet that stormed Normandy on D-Day.

“We want to thank SF Fire for their quick and effective response to the structure fire. We are assessing the situation and we will update everyone when we know more,” SS Jeremiah O'Brien, National Liberty Ship Memorial posted on Facebook.

Later on Saturday, the memorial posted an update stating "We can confirm the O'Brien remains intact and doing well. This is only because of the rapid response of our amazing SF Firefighters and Fireboats."

Videos from the scene were posted to social media showing the flames illuminating the dark sky and billowing smoke during the early morning hours on Saturday.

Good morning San Francisco. #SFFD units have been on scene at Pier 45 since 4am this morning working on a 4th alarm #fire. They will be here for a while. Please avoid the area #yoursffd pic.twitter.com/VsslRhCV0Q

Heat and smoke from the fire could be seen from space shown by the National Weather Service in the Bay Area.

Heat from a large fire at Pier 45 in San Francisco can be seen (black squares) in satellite imagery taken from space early Saturday morning. pic.twitter.com/WpUNrC77Tl

Pydynowski said conditions will still be breezy Sunday and Monday but not as windy. There is a potential for gusts reaching 20-25 mph each afternoon.

“Going forward, it will be dry this weekend into next week there and turning warmer starting Monday,” Pydynowski said.

The cause and origin of the fire remain unclear at this time. Investigators are on scene working to determine what sparked the fire.