Here they come: 17-year cicadas to emerge in 3 states this spring, summer

After spending 17 years underground, the cicadas in parts of Virginia, West Virginia, and North Carolina are ready to emerge.

Following a 17-year period of underground development, periodical cicadas are set to burst above ground in the coming days and weeks, with three states in particular expected to be hotspots for the bugs to emerge and sing their own song of summer.

Periodical cicadas can appear in 17 or 13-year intervals and cicadas of the same life cycle are classified into different broods. This year’s emergence is classified as Brood IX and the largest quantity of the insects is expected across parts of northwestern North Carolina, southwestern Virginia and southeastern West Virginia. 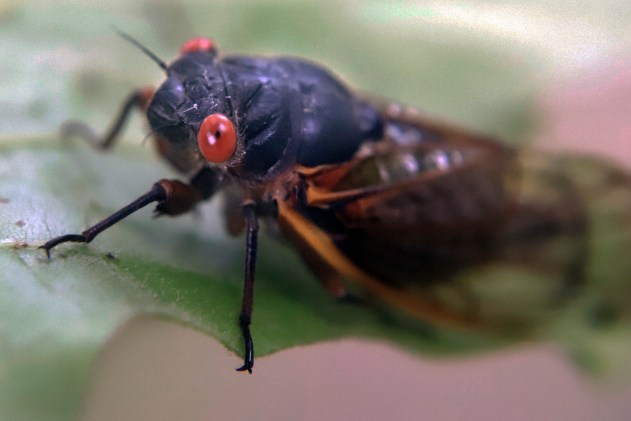 One of the millions of periodical cicadas in the area clings to a leaf on Saturday, June 1, 2019 after it emerged from a 17-year hibernation in Zelienople, Pa. (AP Photo / Keith Srakocic)

One of the biggest factors that helps the insects know when it’s time to dart above ground is when soil temperature reaches a comfortable 64 degrees Fahrenheit. The bugs typically arrive in mid-May and can continue to come out through early July. And, while the mid-May cold snap felt across the Midwest, Northeast and mid-Atlantic could delay their full emergence, it likely won't have a substantial impact on the brood, several experts told AccuWeather.

Michael Skvarla, the director of the insect identification lab at Pennsylvania State University, said in warmer springs, cicadas can accumulate more degree days, which could allow them to arrive on the scene sooner. Conversely, cooler springs allow them to make an appearance later in the year, he said.

“The cold certainly won’t kill the cicadas off,” Skvarla said, adding it could delay their emergence by a couple weeks.

However, Dr. Jim Fredericks, chief entomologist for the National Pest Management Association (NPMA), said the soil temperature about 8 inches deep where the insects are burrowed can act as an insulator from the temperature above ground, meaning a delay, if any, won’t be noticeable on a wide scale, he told AccuWeather.

When it comes to their unique life span, the 17-year life cycle of periodical cicadas is thought to have evolved as a strategy to avoid predation, which makes it difficult for other species that use cicadas as food to sync with their own life cycles, Fredericks explained.

Different broods surface in different regions, though some members of a population may turn up early (or late) and some regions see overlap. "Over time, these breeding populations evolved into predictable emergences,” he said.

There are a dozen different broods of 17-year cicadas and three broods of the 13-year type. Over the years, several classifications of 17- and 13-year cicadas have gone extinct.

John Cooley, a researcher with the University of Connecticut who maps the species' boundaries for the cicada-tracking website, Magicicada, says the broods are regional and fit together like puzzle pieces.

“Presumably, the broods also reflect historical weather events or climate fluctuations that got some cicadas out of sync with their neighbors,” Cooley told AccuWeather via email. Brood IX is said to be smaller than others but particularly diverse, he added. To date, Cooley and his research team have mapped over 10,000 localities where cicadas have been observed.

While underground, cicadas aren’t simply hibernating. They feast on tree roots to detect what’s going on above, and spend time digging tunnels. Cooley said that the process for emergence actually begins in the fall and he suspects the recent cold weather “will slow things down” for their appearance in the coming weeks.

Despite the cold weather, some residents in North Carolina commented on the website, CicadaMania, that they began to hear some cicadas during the week of May 11-17. 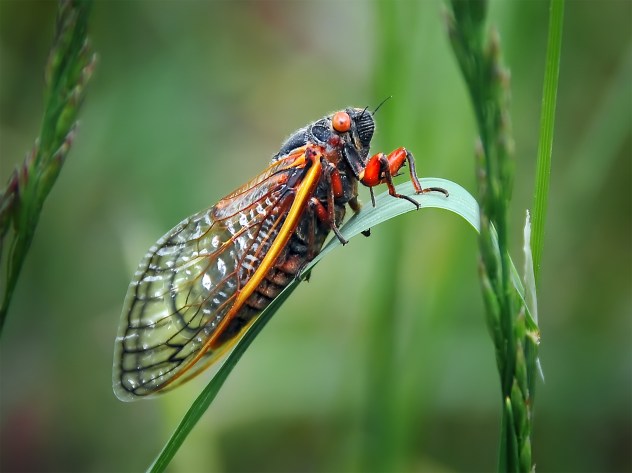 A 17-year-old cicada bug sitting on a blade of grass in western North Carolina. (iStock / Getty Images Plus)

Adult cicadas have a short lifespan—typically about a month—but females can leave behind hundreds of eggs, meaning their populations are enormous, the NPMA says.

According to Magicicada, these cicadas are not known to be particularly harmful, but people who have fruit orchards or tree farms might find that they can become problematic if too many feed on a particular plant or lay eggs in twigs, which can cause damage to trees.

A fully emerged brood will be quite noticeable, even if you can’t spot them. That’s because as they begin their next mating cycle, the male cicadas will “sing” to the females. This can often lead to a “deafening” sound, according to Skvarla, while other experts have described a full brood's mating chorus as “an insect-sized fleet of jets preparing for liftoff.”

On occasion, periodical cicadas can arrive way ahead of schedule. A recent report from KSDK in St. Louis said some 13-year cicadas that are a part of Brood XIX have arrived four years earlier than normal in the St. Louis area this spring.

Periodical cicadas can be prone to getting "their timing mixed up and may emerge early or late," Dr. Gene Kritsky, dean of behavioral and natural studies at Mount St. Joseph University in Cincinnati, told the news station. "Early emergences of 17-year are well documented, but such accelerations of 13-year cicada have not been widely reported."

The weather is driving farmers' planting decisions, despite future uncertainty
When will summer heat up? AccuWeather forecasters answer that and more in 2020’s outlook
Daily coronavirus briefing
What the massive locust swarm in Africa and the Middle East means to the US