A double-barreled storm will take aim at California with drenching rain, high-country snow and the risk of flooding and mudslides later this week.

The first of two rounds of rain and high-country snow is scheduled to roll ashore into Northern California during Thursday night.

The rainfall during Thursday night is likely to be generally light and intermittent. The most significant impacts will be to slow travel. 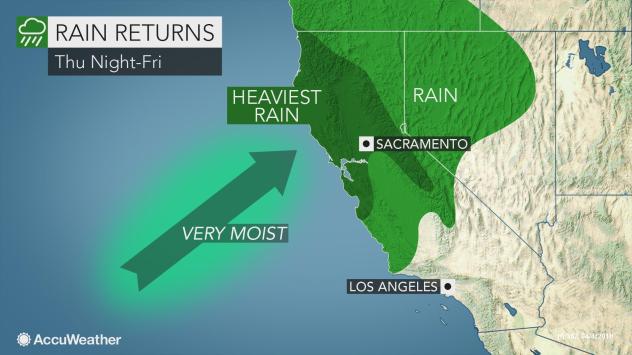 The risk of downpours will increase as Friday progresses in San Francisco and Sacramento. Airline delays are likely to mount by Friday evening, and travel on area roads may be difficult due to the effects of locally heavy rainfall.

It is possible that rain may impact the MLB game between the Giants and Dodgers Friday evening at AT&T Park.

During Friday night and Saturday, the main effects of the second round of rainfall will be felt and have a better chance of extending into much of Southern California. 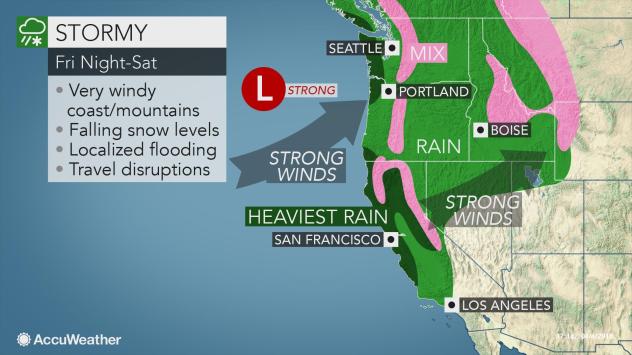 While intense rainfall is not foreseen for Los Angeles and San Diego at this time, a more southward shift in the storm track may bring heavier rainfall to these metro areas and surrounding locations.

At this time, the western slopes of the coastal ranges and central and northern Sierra Nevada are likely to receive 3-6 inches of rain with locally higher amounts from Thursday night through Saturday.

However, enough rain is likely to fall to increase the risk of mudslides and flash flooding in recent burn scar areas, including Montecito, California.

Rainfall over coastal Southern California is likely to range between 0.10 and 1 inch, with greater amounts in the mountains north of Los Angeles.

Enough rain may linger in the San Francisco area to impact Game 2 of the MLB series between the Giants and Dodgers on Saturday afternoon.

Gusty winds and rough seas and surf will accompany the second round of rain from Friday night to Saturday.

Winds may be strong enough to down trees and cause sporadic power outages along the coast and over the ridges.

The most recent storms have brought some improvement to the long-term dry conditions, according to the United States Drought Monitor. Much of the northern two-thirds of the state remain abnormally dry for the winter. A significant part of Southern California remains in moderate to severe drought.

The most recent storms during March dumped several feet of snow on the Sierra Nevada. Much of the state relies on the gradual meltdown of Sierra Nevada snow during the warm season for drinking water and irrigation. Runoff fills area streams and reservoirs.

Snow with the late-week double-barreled storm will be restricted to the high country of the Sierra Nevada, according to AccuWeather Senior Meteorologist Brett Anderson.

"Mostly rain is forecast to fall at Donner Pass and Lake Tahoe, California," Anderson said. "However, as colder air sweeps in on Saturday, snow levels may lower enough to bring a change to snow or a rain/snow mix."

Some rain showers may survive the trip over the mountains and across the high deserts to Las Vegas on Saturday.

Conditions will improve from south to north across California on Saturday night and Sunday.