Devastating fires charring California have claimed more lives than any fire in the state's history, and the economic toll is predicted to climb to $85 billion.

“We estimate the California wildfires will profoundly affect the economy of California. The cost to contain and fight the fire and deal with the aftermath will be in the billions. And, the loss in tax revenue from businesses no longer around, including the vineyards; the workers who have lost their jobs and can no longer pay taxes as well as other impacts will be quite costly. This will create a hole in the California budget, which may necessitate an increase in taxes. If California has to borrow more this might negatively impact its bond ratings and it will have to pay higher interest rates on all borrowings, which can cost upwards of 10s of billions of dollars. At this time, we estimate the economic impact of the fires is already approaching $70 billion dollars. Based on our forecast the total costs from this disaster on the economy would exceed $85 billion and, if the fires are not contained in the next couple of weeks, the total economic impact could even reach $100 billion.”

This past week has yielded the deadliest outbreak of wildfires across Northern California, surpassing the 29 fatalities caused by the 1933 Griffith Park Fire. The wildfire complex alone near Santa Rosa killed at least 22 people.

Cal Fire estimated that 5,700 homes and other structures have been destroyed, and approximately 100,000 people had evacuated. The number of evacuees dropped to nearly 75,000 on Sunday morning. 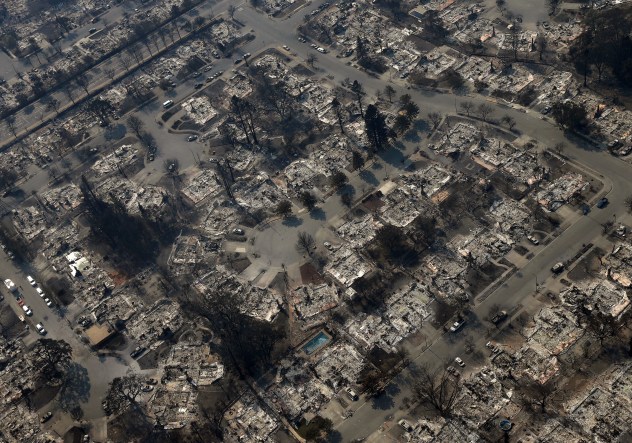 It could take three to four weeks to fully contain the fires burning around Santa Rosa.

A reduction in the winds across Northern California will aid firefighters battling the blazes early this week, but low humidity and warm air will persist and allow the fires to burn quickly through the dry vegetation.

However, winds may strengthen again before and after the rainfall, hampering efforts to reach containment.

Besides weather conditions, other factors like resources, including manpower and equipment, as well as terrain, can all play a role on fire containment. If additional wildfires ignite, that could further strain resources.

2017 wildfire season to go down in record books; USDA at 'a tipping point' due to budget woes

Even before the sudden explosion of wildfires in California, federal wildfire suppression costs had already skyrocketed to unprecedented levels.

“As of October 2, 2017, the Forest Service has spent $2.410 billion on fire suppression operations for fiscal year 2017,” the United States Department of Agriculture (USDA) said in their weekly update.

The Associated Press reported on Sunday that half of California's $469 million emergency fund for large wildfires has already been used in the last three months for firefighting costs.

Some of the largest and longest-burning wildfires of the year occurred across the Pacific Northwest in late August and early September. Winds carried the smoke from these fires all across North America.

Every year, the budget for the USDA includes money to help battle wildfires, but in recent years, the amount budgeted for wildfire suppression has not been enough.

“In many years, fighting fires costs more than was planned for that year, requiring mid-season transfers of additional dollars from already depleted accounts to pay for firefighting," the USDA said.

In some cases, this means taking money away from projects that are meant to help prevent catastrophic fires in the future.

“The growth in fire suppression costs has steadily consumed an ever-increasing portion of the agency’s appropriated budget,” the USDA said. “The agency is at a tipping point.”

Earlier this year, a new bill was introduced in the Senate called the Wildfire Disaster Funding Act.