There are also reports of several injuries.

The accident occurred on westbound Interstate 96 near the town of Fowlerville, located in Livingston County, which is about 45 minutes east of the capital of Lansing.

According to local authorities, the crash occurred when heavy snow began falling on the roadways, leading to whiteout conditions. The Livingston County Sheriff's office told the Detroit Free-Press that the falling snow melted then froze, leading to slippery travel. 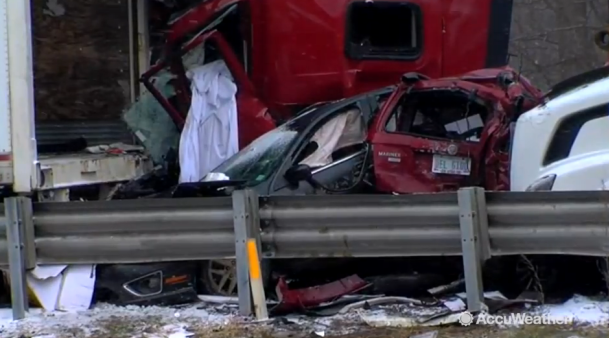 This image shows the scene of a pileup involving up to 40 cars near Fowlerville, Michigan, on Thursday, Dec. 8.

“A burst of snow affected the interstate around or just before the time of the wreck,” AccuWeather Senior Meteorologist Dave Samuhel said. "Temperatures were around 25-26 F at the time."

The visibility was reported to be under a quarter of a mile at the nearby town of Howell, at 10 a.m. EST, Samuhel added.

Multiple crashes were reported in Livingston County, according to the Michigan Department of Transportation. A stretch of I-96 westbound near the Fowlerville exit was closed for much of the day before reopening Thursday night.

While flurries will continue to fly around the area of the crash, there could be a brief heavier snow shower through Thursday evening, Samuhel said.

Bands of lake-effect snow will continue to pose travel hazards into Friday across parts of the Great Lakes and Northeast.

According to AccuWeather Senior Meteorologist Alex Sosnowski, the I-90 corridor will be the most affected from Indiana to Ohio, Pennsylvania and New York State.

Several other major pileups were reported in the Northeast on Thursday.

In Ohio, a portion of I-90, east of Cleveland, was shut down for more than 14 hours after a 50-vehicle pileup occurred Thursday afternoon. Twenty people were injured and the highway was reopened Friday morning, according to the Associated Press.

Another accident that was blamed on lake-effect snow occurred in northwest Pennsylvania. Up to 50 or 60 vehicles were involved in the accident early Thursday on I-90 in Erie County. At least 15 people were hurt in the crash.