This satellite image of Cyclone Idai was taken on Monday, March 11, 2019. (NOAA)

More than 900,000 oral cholera vaccines arrived in Mozambique for the launch of a vaccination campaign Wednesday, three weeks after Tropical Cyclone Idai barreled into the country packing the power equivalent to a Category 3 hurricane and leaving mass devastation in its wake. There have been two reported deaths from cholera with more than 1,400 other recently confirmed cases, The Associated Press reported.

"The next few weeks are crucial and speed is of the essence if we are to save lives and limit suffering," World Health Organization (WHO) regional director for Africa Dr. Matshidiso Moeti said in a statement.

Tropical Cyclone Idai struck March 11 and is the deadliest storm to hit Mozambique in the last 30 years, according to AccuWeather research. Records for Mozambique beyond the 1970s are less reliable.

Idai has been blamed for killing 598 people in Mozambique so far, with officials saying that the death toll is a preliminary number and that the real figure may never be known; it's possible some people were washed away or quickly buried in the throes of the storm. Idai also killed at least 259 people in neighboring Zimbabwe and at least 56 in Malawi, officials have said.

The powerful cyclone has also displaced more than 128,000 people in Mozambique, which is located on the coast of southeast Africa and is the world’s 36th-largest country.

UN Secretary-General Antonio Guterres has called it "one of the worst weather-related catastrophes in the history of Africa."

Below is a list of the storms and cyclones that have hit Mozambique since 1988 with the number of fatalities and people displaced. 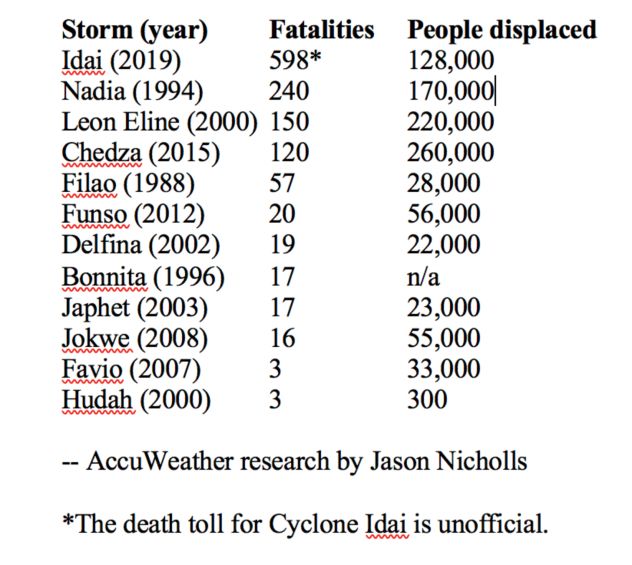