A distress call was issued off the coast of Alesund, Norway, on April 5 after a Dutch cargo ship shifted during a storm. The weight and weather threatened to capsize the ship.

The past couple of months have not been kind to ships. Just about a week after the massive Ever Given container ship was freed from its wedged position in the Suez Canal, another distressed cargo vessel captured global attention after a run-in with rough weather.

The Eemslift Hendrika Dutch cargo ship was in danger of capsizing off the coast of Norway after an intense storm shifted its cargo on board and left the ship badly listed early this week. The vessel was unmanned following the dangerous evacuation of the entire crew on Monday and its fate remained in question into Thursday as it drifted through the dangerous waters of the North Sea before crews were eventually able to get the upper hand, according to The Associated Press.

Early on Thursday morning, the AP reported, the vessel was successfully controlled by a joint rescue operation from Norway and the Netherlands after it had drifted into the Norwegian Sea. The cargo ship was slowly being towed to the Norwegian coastal town of Alesund. 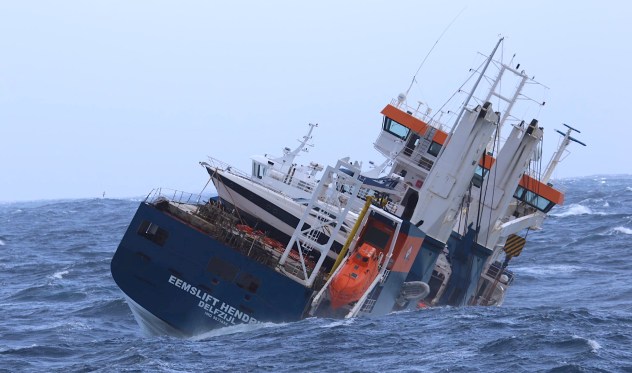 The list of a ship is the angle at which the ship either leans or tilts, to either port or starboard. It is caused by the cargo's distribution of weight being uneven. In the case of the Eemslift Hendrika, that cargo was multiple smaller boats on its deck, Reuters reported.

Of the 12 crew members, eight were airlifted into a helicopter, but the last four were forced to jump into the raging sea due to the waves that were rocking the boat as well as the severe list. Dramatic footage from the rescue teams captured the members jumping into the sea before being rescued from the rough water.

The four men who had to jump off initially stayed onboard the vessel in an effort to stabilize the ship after the initial eight members were rescued, but they had to bail once conditions worsened. According to the Daily Mail, one crew member was sent to the hospital with injuries. 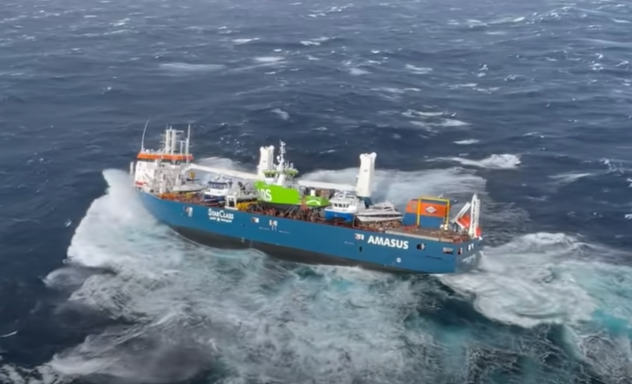 Officials said the ship listed between 15 and 30 degrees to starboard into heavy seas, and capsizing fears have grown each day with the ongoing storminess. One of those smaller boats on deck reportedly fell into the ocean due to the storminess, helping reduce the list which was originally between 40 and 50 degrees.

The ship on Wednesday was floating without engine power on the Norwegian Sea, about 80 miles away from the coast.

AccuWeather Senior Meteorologist Adam Douty, who focuses on international forecasting, said the weather at the time of the distress call on April 5 can be directly blamed for the calamity that has followed. The same system that would wreak havoc on the vessel also brought a cold blast over much of Europe, he said. 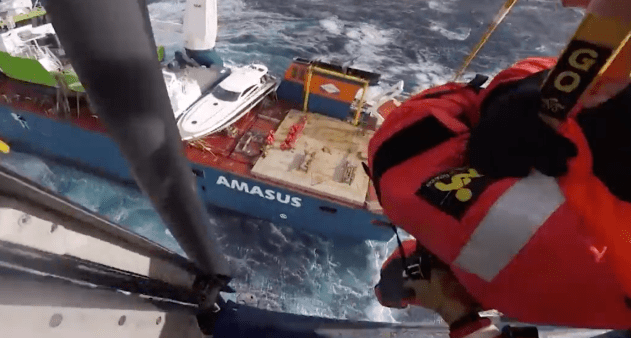 Footage from the rescue helicopter captured crew members being carried to safety, but four of those members had to dive into waters due to the dangerous situation.

"There was a strong northerly wind caused by that same storm system, and it caused large swells across the North Sea," Douty said.

Waves were measured as high as 37 feet in the area, while computer forecast models indicated even higher waves, over 48 feet, in the general area, according to AccuWeather Senior Weather Editor Jesse Ferrell. The WaveWatch III model also showed another buoy reporting 62 mph gusts and 35-foot waves, Ferrell added in a tweet.

Authorities were concerned about preventing the ship from not only sinking but also crashing into the shore, The AP reported.

At least one ship that was being carried by the Eemslift Hendrika fell into the ocean amid the rocky seas.

As the ship is slowly towed to Noway, Douty said the weather in the immediate future may not fully cooperate.

"Another storm system can bring additional strong winds and rough seas on Thursday and Friday," he said. "There may be a more prolonged stretch of calmer weather later in the weekend into early next week, but the region typically has unsettled weather, and long stretches of calm winds and light seas are hard to come by."