A major change in the weather pattern is poised to take shape next week that will foster more persistent cold air, lake-effect snow and the potential for a couple of storms in parts of the central and eastern United States.

Through the first couple of days of December, the weather over much of the nation will remain mild and tranquil.

Across much of the nation, snowplows and snow shovels will sit idle into this weekend. Lightweight winter gear will suffice for the northern tier, while some people in the South may still get by with shorts and short sleeves. 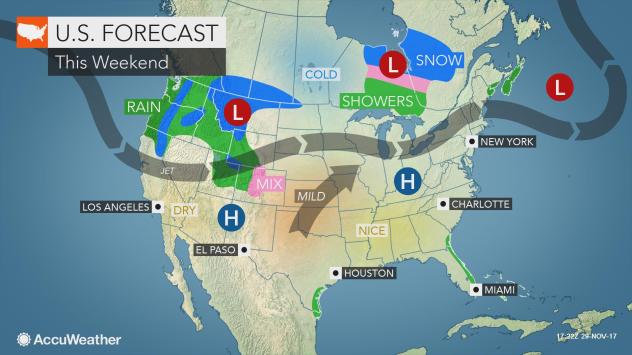 However, changes in the jet stream pattern will begin this weekend and continue to evolve next week.

The jet stream is a high speed river of air at the level where jets cruise. This river guides storms along and can direct batches of warm and cold air.

Colder air will first enter the North Central states early next week, then propagate eastward later on. The eastward speed of that cold air may hold the key for potential storms.

A storm is forecast to brew over the Plains and track toward the Upper Midwest later this weekend into early next week. 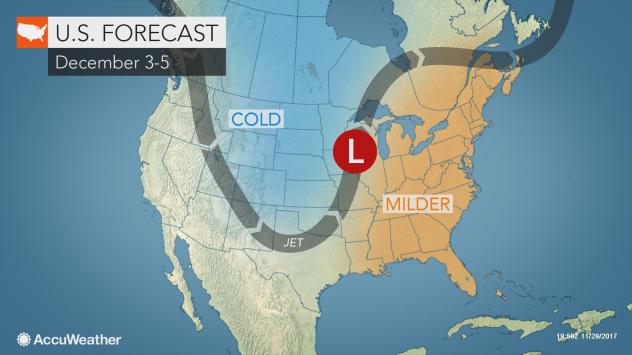 The exact track and strength of this storm will determine the extent of snow over parts of the northern Plains to the upper Great Lakes. At this time, heavy snow appears most likely across the border in parts of northwestern Ontario and Manitoba, Canada.

Temperatures will be too high to allow snow to fall during the storm in Chicago, Detroit, Cincinnati and Minneapolis.

The storm's main role, with assistance from a southward plunge in the jet stream, will be to set up progressively colder air across the Central states next week.

The AccuWeather RealFeel® Temperature can help you determine how cold it really feels outside How to pick the perfect Christmas tree for your home Mostly dry conditions in store for National Christmas Tree Lighting ceremony Consider donating, helping hurricane victims in lieu of buying holiday gifts this season

Colder air will spread into the Eastern states but perhaps not as quickly as over the Midwest.

"There is a great deal of mild, Pacific air across the [United States] and southern tier of Canada," according to AccuWeather Lead Long-Range Meteorologist Paul Pastelok. "It may take a while for that air to be pushed away."

The slower advance of the cold air to the Atlantic Seaboard may greatly limit the chance of snow along the Interstate 95 corridor of the Northeast.

Early indications are that one to two storms will sweep northeastward sometime during the period from Wednesday to Saturday of next week. 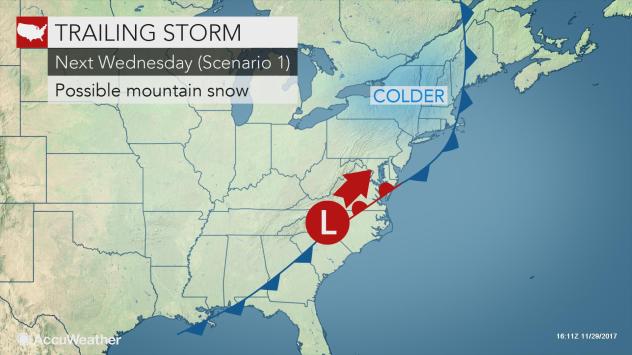 Unless the storm(s) track farther east or cold air sweeps in first, rain and not snow is likely from Washington, D.C., to Baltimore, Philadelphia, New York City and Boston.

However, there is a chance that enough cold air sneaks in to allow rain to change to snow in the higher elevations of the Appalachians. 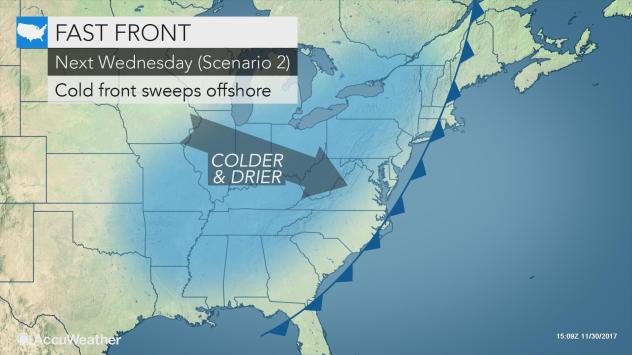 Another scenario suggests there is no storm, but rather a simple sweep of cold and dry air, preceded by a brief round of rain from the Ohio Valley and Great Lakes to the Atlantic coast.

Regardless of any storm with rain and snow, the cold air will then press toward the mid-Atlantic and New England coasts on or before next weekend.

The cold and wintry weather beginning next week is likely to continue to build during the following week.

"Arctic air with intense cold is most likely to first invade the northern Plains then progress eastward toward the middle of December," Pastelok said. 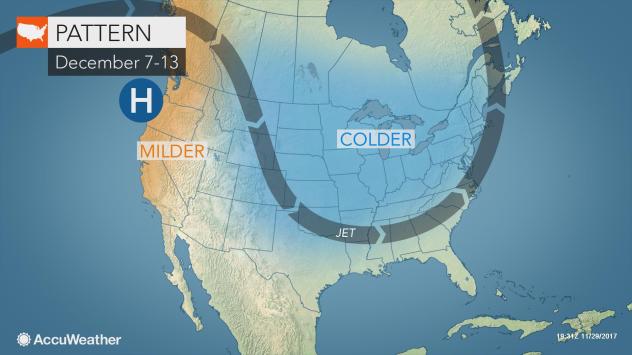 Another storm may attempt to ride from the Ohio and Tennessee valleys to the Northeast states as arctic air advances toward the Atlantic coast next week, Pastelok stated.

AccuWeather's long range team of meteorologists are confident that temperatures to trend to well below average over the Ohio Valley, Great Lakes and Northeast around the middle of the month.

At that level, temperatures would be significantly lower than the average for much of December 2016.

There was a mid-month cold snap during 2016 on par with forecasts for the middle of December this year.

Even if the anticipated cold weather is less extreme in terms of actual temperature, the combination of wind and chilly air will feel like December. The cold weather may have many people grabbing a warm coat when venturing out and turning up their thermostat to keep warm when at home.

Energy savings accumulating into the start of December may be wiped out during the middle of the month.