Several times per decade, the moon passes through Earth's shadow and changes the color from white to "blood" red, but what causes it to change color during a total lunar eclipse?

A total lunar eclipse occurs when the moon passes directly through the Earth’s innermost shadow and can be seen for several hours across half the globe. 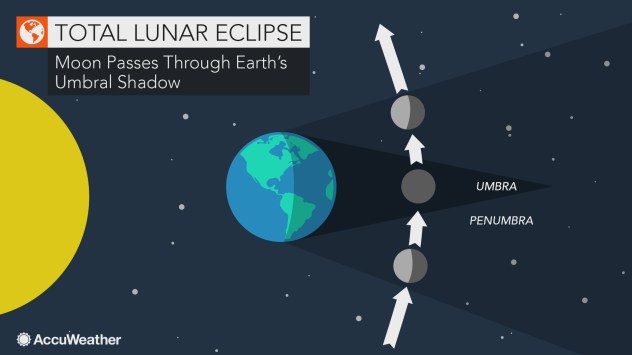 Although the moon is passing through the Earth’s shadow, it does not go dark. Instead, the moon appears a rusty orange or dark red.

This change in color can be traced back to the light passing through the Earth’s atmosphere.

“The red component of sunlight passing through Earth's atmosphere is preferentially filtered and diverted into the Earth's shadow where it illuminates the eclipsed moon, making it appear red or 'blood' color,” said Caleb Scharf, director of astrobiology at Columbia University.

Another way to think of this change in color is to imagine standing on the surface of the moon during a total lunar eclipse. When looking at the Earth, you would see every sunrise and sunset happening on Earth at the same time.

A total lunar eclipse as seen from the surface of the moon. (Animation/NASA)

This new color the moon takes on is how total lunar eclipses earned the blood moon nickname.

“'Blood moon' is not a term used in astronomy. It’s more of a popular phrase, perhaps because it sounds so dramatic. It simply refers to a 'total lunar eclipse,'” the Old Farmer’s Almanac reported.

Predicting the color the moon will turn during a total lunar eclipse can be difficult and is determined by certain conditions in Earth’s atmosphere.

"The exact color that the moon appears depends on the amount of dust and clouds in the atmosphere," according to the NASA website.

"If there are extra particles in the atmosphere, from say a recent volcanic eruption, the moon will appear a darker shade of red,” NASA reported. 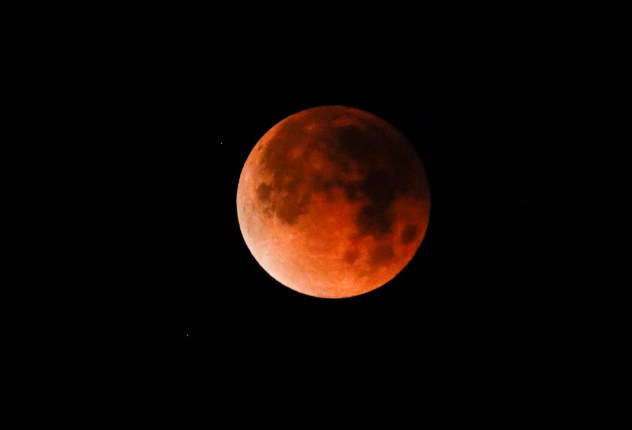 Regardless of the color the moon appears, total lunar eclipses are one of the easiest celestial events to witness in the night sky, as long as cloud-free conditions are present.

Total lunar eclipses typically last for several hours and are visible across a large area of the globe, allowing millions of people to see the moon turn red every time they happen.

“It's one of best astronomical events to witness without any equipment and we know exactly when it's going to happen," AccuWeather Meteorologist and astronomy blogger Dave Samuhel said.