Severe rainfall caused floodwaters to gush through Mogente, Spain, on Sept. 12. You can see the water race downstream with incredible speed. No deaths or injuries were reported from this area.

A slow-moving storm system turned deadly on Friday as downpours caused flooding and travel shutdowns across parts of eastern Spain.

While downpours have generally been confined to eastern Spain in recent days, the risk of flooding expanded westward on Saturday, bringing heavy thunderstorms to Madrid.

The downpours have already been going on for several days and have added up to incredible rainfall totals in some places.

Thousands of people have been rescued amid the flooding, according to The Associated Press.

Ontinyent, in the province of Valencia, recorded a whopping 277.6 mm (10.93 inches) through Thursday morning.

Other portions of Valencia have picked up between 300 and 450 mm (12 and 18 inches) of rain since the storm began earlier in the week.

AEMET, the Spanish weather service, said that Wednesday was the wettest day in Ontinyent since records began in 1917.

The extremely heavy rain has caused major flooding on rivers in that part of Valencia, including in nearby Moixent.

The flooding rain has closed schools across large portions of eastern Spain. School was canceled for 338,000 students in the provinces of Alicante and Valencia on Thursday, while all schools in the province of Murcia were also closed. 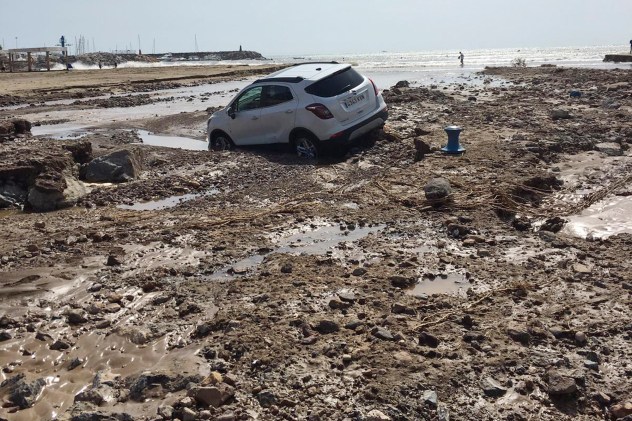 A car lies in the mud after a flood in San Jose, Almeria, in south-eastern Spain, Friday, Sept. 13, 2019. Spanish authorities say that heavy storms in the southeast have claimed another victim, bringing the death toll from the extremely bad weather to three. (AP Photo/Serge Carthwright)

The flooding turned deadly on Thursday after emergency services found a 51-year-old woman and her 61-year-old brother dead inside an overturned car that had been caught in raging floodwaters, according to the Associated Press.

The floodwaters claimed three more lives on Friday. A 48-year-old man died in Almeria after ignoring police warnings and driving into a flooded tunnel, where his car became trapped, the Europa Press said. Emergency services in Andalusia reported a 36-year-old man in Jámula had suffered a similar fate, according to the AP. The fifth fatality came in Alicante, where the Europa Press reports a man was dragged by the water while leaving his vehicle.

One of the hardest-hit locations from Thursday night into Friday was San Javier where 276.8 mm (10.90 inches) of rain fell.

The stormy weather also forced the closure of airports in Murcia, Palma and Almeria for extended periods on Friday.

Spotty showers and downpours will continue into Sunday across central Spain, but the rain will not be as widespread as recent days.

Aside from causing dangerous flash flooding and mudslides, these thunderstorms will have also produced hail and even a couple of tornadoes.

These downpours will continue into Sunday, which will bring the threat of downpours and thunderstorms to Madrid.

Normal rainfall for the entire month of September ranges from 25-75 mm (1-3 inches) across eastern Spain.