Atmospheric rivers are responsible for as much as 20 to 50 percent of California's rainfall in any given year. What are they?

A storm is bringing life-threatening flash flooding, mudslides and an avalanche risk across California as it is loaded with subtropical moisture from an atmospheric river. California will be bombarded with heavy rain and fluctuating snow levels through Thursday night.

An atmospheric river is a term to used to describe a plume of tropical moisture in the atmosphere that can result in heavy rainfall or snowfall in a narrow swath. Use of the term is most common along the West Coast of the United States, but the setup can occur anywhere that persistent winds can transport moisture from the tropics to a mid-latitude location.

Two homes were destroyed and at least 50 others were evacuated after a mudslide occurred in a neighborhood in Sausalito, California, Thursday morning.

An atmospheric river is bringing heavy rain and mountain snow to #California. Check out the conveyor belt of clouds and moisture heading toward the West Coast in this loop from our newly operational #GOES17 (#GOESWest) satellite. Learn more: https://t.co/DhXRshmtyJ pic.twitter.com/fix8G2myrO

The storm has been potent enough to create dangerous conditions for motorists, especially near burn scar locations and along streams that are prone to flooding.

A general 2-3 inches of rain will fall along the coast from San Diego to Crescent City, California, from the storm. However, rainfall of 3-6 inches is likely along the seaside-facing slopes of the coast ranges and the western slopes of the lower and intermediate elevations of the Sierra Nevada. In these mountainous areas, an AccuWeather Local StormMax™ of 12 inches can occur.

Palm Springs, California, recorded its third wettest day on record on Thursday with over 3.5 inches of rain. 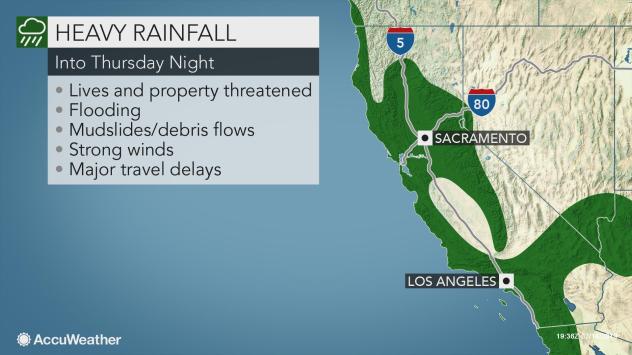 Where there are several inches to a few feet of snow on the ground, there is the potential for the snowcover to liquefy and add to the already heavy rainfall. Rapid flooding along the small streams and short-run rivers flowing out of the mountains at intermediate and low elevations is likely.

Enough rain will fall in the major cities of Los Angeles, San Francisco, Sacramento, San Diego and others to lead to incidents of urban flooding. The rain, along with ponding and blowing spray, will force motorists to slow down and add to commute times. 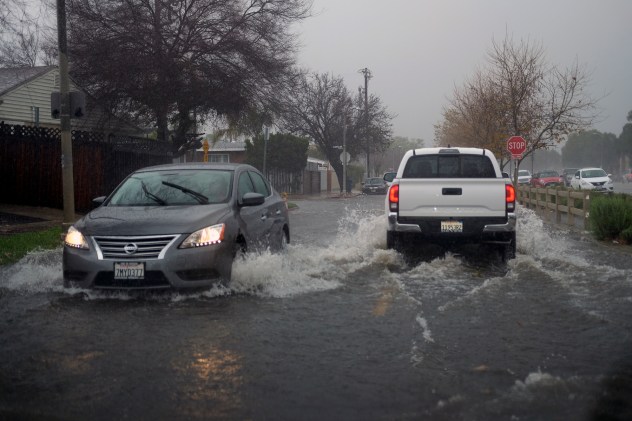 Despite the potential for damaging their vehicles and putting themselves and others at risk, motorists made their way through flooded streets of Panorama City section of the San Fernando Valley in Los Angeles Saturday, Feb. 2, 2019. (AP Photo/Richard Vogel)

Motorists are reminded never to attempt driving through flooded areas. The water may be much deeper than it appears and/or the road surface may have been washed away beneath the water.

On secondary roads in the mountains and canyons, motorists should anticipate closures due to flash flooding, mudslides and other debris flows.

Snow levels that had surged above Donner Pass, California, for a time, have now begun to fall. Heavy snow is expected for the duration of the storm over the summit along I-80 with difficult travel.

Over the peaks and ridges of the Sierra Nevada, where snow will linger into this weekend, a general 3-6 feet of snow will fall with an AccuWeather Local StormMax™ of 10 feet with this storm. 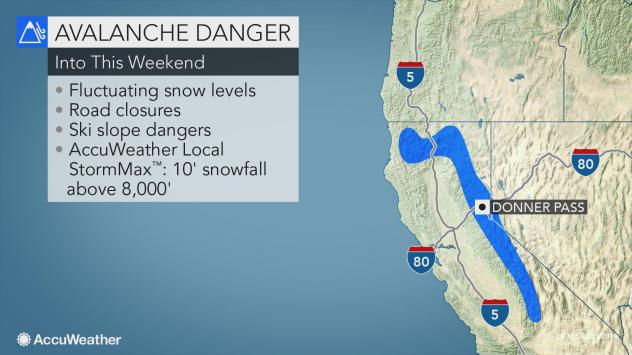 With the fluctuating temperatures, some of the ski slopes may be very dangerous due to the risk of avalanches.

Farther inland, rain will fall on locations such as Palm Springs, California, Phoenix, Las Vegas and Reno, Nevada, and Salt Lake City. Palm Springs has already receive a half a year's worth of rain from this single storm in about 10 hours with more into Thursday night.

Heavy snow will fall on the northern and central Rockies as well as the ridges in the Wasatch Range.

Winds this strong can cause some high-profile vehicles to lose control and roll over. Trees can topple over in the saturated soil and lead to power outages.

Conditions will improve over the lower elevations during Friday and Saturday. However, there will still be spotty rain showers in the region.

It is possible that freezing levels dip enough to allow a bit of snow and slippery travel over the passes in Southern California to end the week and during the first part of the weekend. 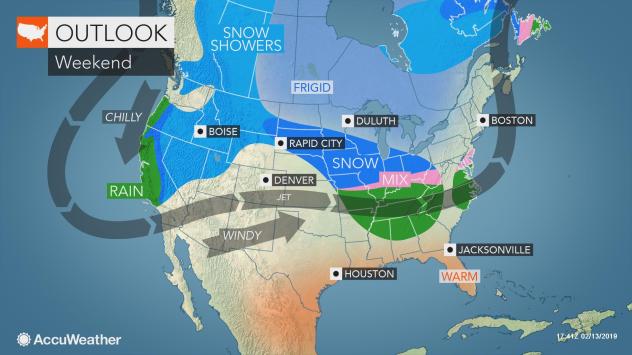 "It appears that additional storms will either continue to drop southward along the West Coast and/or pivot inland from the Pacific through the end of February," according to AccuWeather Long-Range Meteorologist Jack Boston.

The pattern will continue to bring rounds of low-elevation rain and mountain snow in the coming weeks with the dangers as well as the long-term drought relief benefits.

Reservoirs will continue to take on water from this storm and others to follow.

Download the free AccuWeather app to see the latest forecast and advisories for your area.

Few things reflect the power of nature and weather like avalanches. This week host, Regina Miller talks to Mark Staples, director of the Utah Avalanche Center, and Dan Burnett, Group Mission coordinator for the Summit County Rescue Group in Breckenridge, Colorado. They discuss recent deaths on the slopes, the weather situations that can contribute to an avalanche, the dangers of human interaction, and how best to survive.