Wind and currents are two important factors that determine how red tide spreads. Recently, the algae was pushed closer to shore in the Tampa Bay area killing several fish.

Hundreds of tons of dead sea life washed up along the shores of Tampa Bay due to a natural phenomenon known as a "red tide," and now local officials calling on the state government for help in cleaning up the the massive mess.

Nearly 800 tons of dead sea life were collected along the shores that consisted of fish, dolphins, sea turtles, eels and stingrays, according to St. Petersburg Mayor Rick Kriseman.

"You cannot go outside in east St. Petersburg without choking on the smell," Twitter user Peter Schorsch wrote. 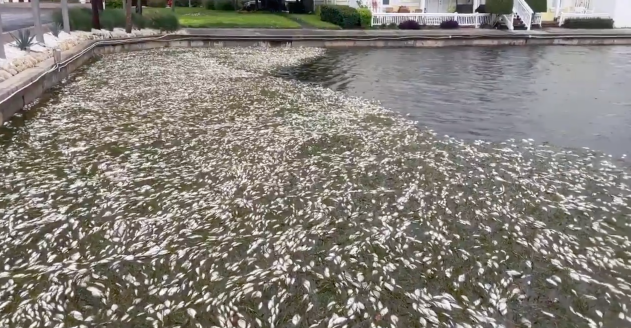 A video captured on July 8 in Tampa Bay showed piles of dead fish floating along the coastline as a result of a red tide. (Twitter/@aagreene87)

"It's pretty awful. The odor sticks to you. It stays in your nasal passages,” Kriseman said during a news conference, CL Tampa Bay reported. “Then, there's the emotional toll of just dealing with all the dead animals.”

Red tides are naturally occurring algae blooms that form in many coastal areas across the globe, AccuWeather Meteorologist Derek Witt said. They are called "red tides" in reference to how the blooms make the water appear. When the concentrations of red tide algae blooms are high, the water can appear red, orange, brown or a mix of all three.

The storm blew in all the dead fish from Red Tide into the canals and it’s heartbreaking 💔 What are we doing pic.twitter.com/v5RqSZUy9d

Witt explained that these algae blooms often pop up as a result of upwelling in costal locations. Upwelling is when wind blows across the surface of water, pushing it away from the coast, and can occur as a result of seasonal wind shifts or after a storm system moves off the coast.

"This causes deeper water to be brought up to replace the displaced surface water, and the deeper water is usually colder and rich in nutrients like nitrate and phosphates," Witt explained. "This increase in nutrient availability allows the algae to thrive and spread rapidly." 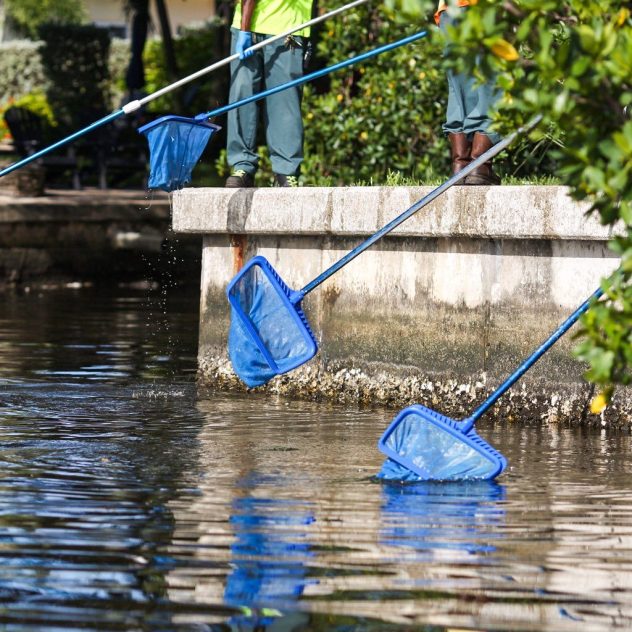 Around 200 workers are involved in the cleanup process after a red tide brought hundreds of tons of dead marine life to the shores of Tampa Bay. (City of St. Petersburg)

The toxins released by the algae blooms can be harmful to marine life, resulting in fish deaths, president and CEO of Mote Marine Laboratory and Aquarium Dr. Michael Crosby said. The decomposing fish can then lead to the formation of even more algae due to their high nitrogen content.

Tropical Storm Elsa made landfall in Taylor County along the Florida coastline on July 7, meaning it could have potentially been involved in the bloom.

"It is possible that Elsa played a part in the bloom. However, based on Elsa’s track, it seems less likely that it would’ve generated upwelling in Tampa Bay," Witt said. "Rather, the excess run-off from rain over the Florida peninsula may have cause more nutrients to be washed out in the bay."

Human activity can also be responsible for algae blooms when sewage and agriculture runoff bring more nutrients into the ocean. To prevent this from happening during the summer months when more rainfall is expected, the city of St. Petersburg announced a fertilizer ban on Thursday, which will be in effect until Sept. 30. 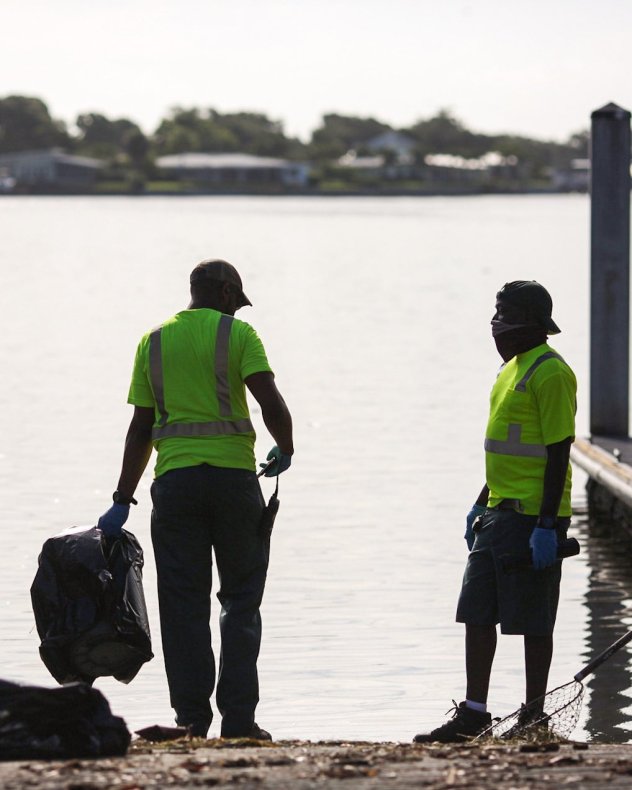 Eight-hundred tons of dead sea life and counting may seem like a daunting number to many, but Crosby said this bloom is "far from being even in the top 20 of the worst blooms."

To clear out the shores naturally, Crosby told AccuWeather's Kim Leoffler that the bay would need easterly winds mixed with currents to carry the algae away from the shoreline. The shape of Tampa Bay's waterways, however, could make that process a difficult one.

"The dynamics in each of these more restricted waterways will require different winds to bring them out," Crosby explained.

Mote Marine Laboratory and Aquarium is currently in the midst of a six-year study on how to reduce the effects of algae blooms, and the current algae bloom has provided the researchers with the perfect opportunity to test their theories in the real world.

"We're hoping to take advantage of the current red tide situation to see if we can rapidly get out and field test a couple of these in a very small isolated kind of a study," Crosby said.