Arrival of cool air to end heat wave in north-central, northeastern US early next week

Cooler air will settle southward across part of the central and eastern United States early next week and trim the extent of the most recent heat wave.

"While steamy air will hold on indefinitely over much of the southern Plains and Southeast, some relief from 90- and 100-degree Fahrenheit air is on the way for parts of the central Plains, Ohio Valley, mid-Atlantic and southern New England," according to AccuWeather Senior Meteorologist Brett Anderson. 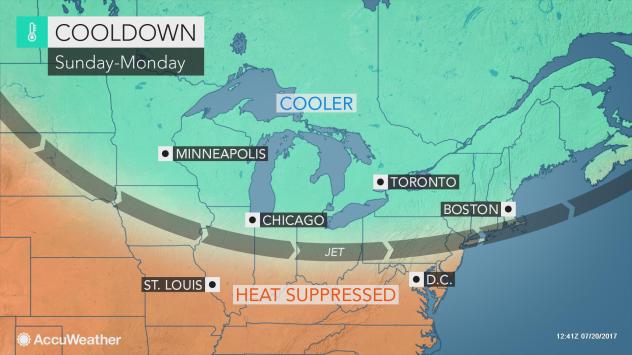 The pattern change will reduce the risk of heat-related illness for many people.

"Factoring in the late-July sun, it will still be hot and rather humid, just not as extreme," Anderson said in regards to the mid-Atlantic and Ohio Valley.

This part of July is about as hot as it gets, on average, so dramatic cooling and a great reduction in humidity is rare in the Central and Eastern states.

For example, in St. Louis and Kansas City, Missouri, highs in the upper 90s and low 100s F will be replaced with highs in the lower to middle 90s for a couple of days.

Long-lasting extreme heat, relative to average, seems unlikely for the first part of August in the Northeast.

For the central and northern Plains, the reduction in heat will only be temporary. 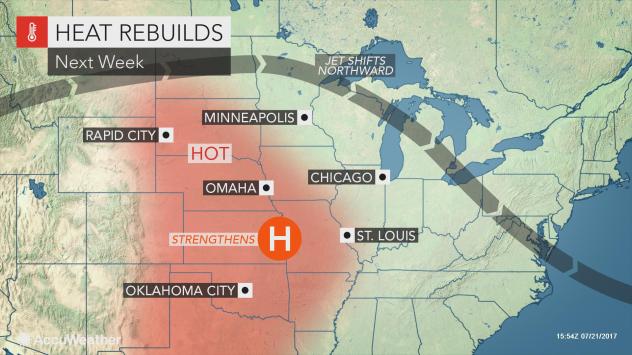 Extreme heat is likely to rebuild next week in the central U.S.

While too much rain has caused flooding in part of the Upper Midwest, drought has been a major negative factor in agriculture for parts of the northern High Plains.

"The spring wheat crop in portions of eastern Montana and the western and central parts of the Dakotas is poor and at risk of failure," according to AccuWeather Lead Long-Range Meteorologist Paul Pastelok.

Extreme to exceptional drought exists in much of this area, according to the United States Drought Monitor.

For some farmers in the region, it may be a challenge to decide whether to till in the wheat and take the insurance loss or try to salvage some of the crop. 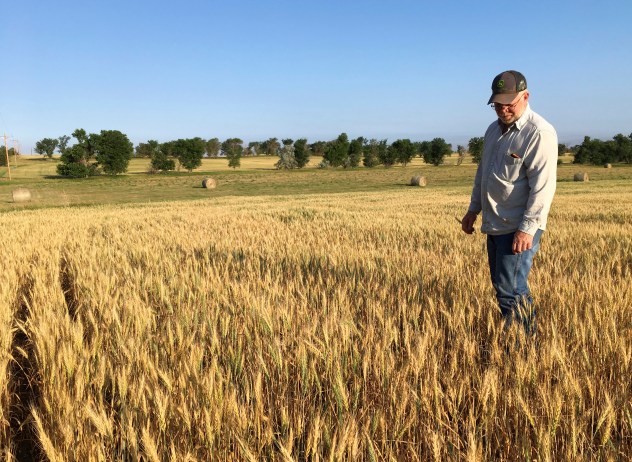 In this July 13, 2017, photo, farmer John Weinand surveys a wheat field near Beulah, N.D., that should be twice as tall as it is. Drought in western North Dakota this summer is laying waste to crops. Some of the wheat may not be worth harvesting. (AP Photo/Blake Nicholson)

Farther east over the northern Plains and Midwest, the drought becomes much more spotty, and soil moisture remains adequate to very wet in some spots.

"In the zone from parts of the eastern Dakotas to portions of Nebraska and Iowa, the corn has been stressed in some areas during July, but there is still some time for a fair crop," Pastelok said.

"We expect more opportunities for rainfall and lower temperatures in the drought areas of the northern Plains later in August, which may be in time for soybeans but could be too late for corn in some cases," Pastelok said.

For the Northeast, reinforcing shots of cool air will keep extreme heat at bay from next week through the end of July.

For example, Washington, D.C., can expect highs in the middle 80s to near 90, which is about average for the last part of July. Temperatures may dip into the chilly upper 60s for several days in Boston, where the normal high is in the lower 80s.