For the latest reports as Alberto bears down on the southeastern United States, please visit this news story.

Flooding will remain the greatest concern across the southeastern United States as Alberta moves inland following landfall on the Florida Panhandle during the afternoon of Memorial Day.

Governors of Florida, Mississippi and Alabama declared states of emergencies ahead of the advancing subtropical storm.

Alberto has failed to strengthen into a hurricane but will still pose dangers to residents and those on vacation across the Southeast. 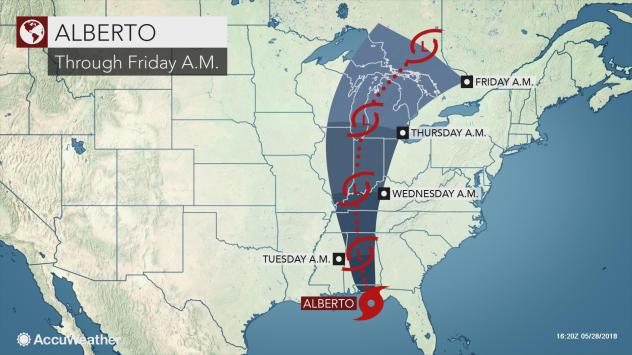 Alberto made landfall near Laguna Beach, Florida, as a subtropical storm on Monday afternoon.

AccuWeather Hurricane Expert Dan Kottlowski stressed that the subtropical storm classification is only in reference to the fact that Alberto is not considered a pure tropical system.

"Otherwise, it has the same impacts as a tropical storm," he added. "That includes tropical-storm-force winds of 39-55 mph, a storm surge potential, heavy rain and the potential for isolated tornadoes." 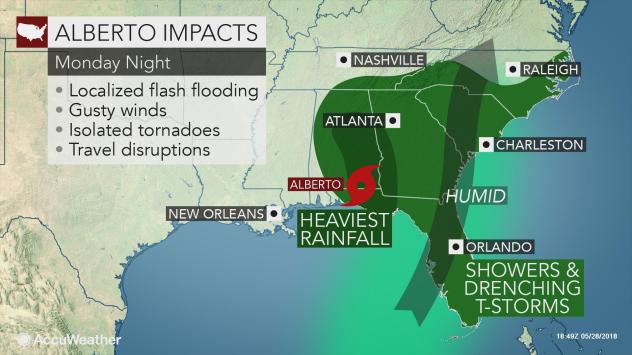 Alberto remaining below hurricane strength will result in a small area of winds that can lead to power outages and tree damage across the Florida Panhandle. Weaker structures may also sustain damage.

Additional damage may occur where isolated tornadoes spin up east of Alberto’s track.

Reports: Flood risk to continue in wake of Alberto’s landfall
2018 Atlantic hurricane outlook: How active will the season be following Alberto?
Flood danger to persist in southeastern US as Alberto moves inland
5 potentially dangerous hurricane preparation myths debunked
Wet weather to surge across midwestern, northeastern US by late week

"The main concern from Alberto will continue to be heavy rainfall," Kottlowski said.

Alberto is expected to unload widespread 4-8 inches with locally higher amounts on the Florida Panhandle and into Alabama into Monday night.

More evacuations may get issued as runoff from the torrential rain can trigger significant flooding, which may inundate some homes and communities. Roads or bridges may become flooded or damaged.

While the risk for damaging winds will lessen after Alberto makes landfall, the flood danger will expand northward into the Tennessee Valley in the days following Memorial Day. 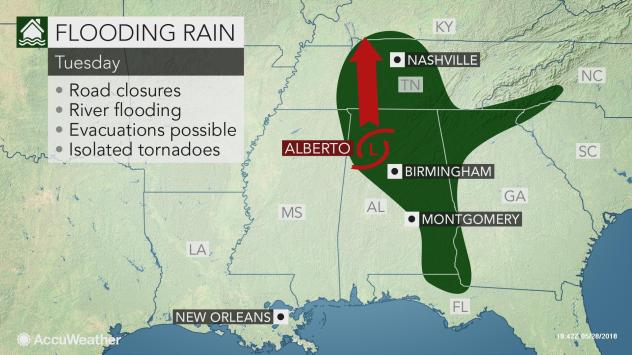 Over a span of less than 300 miles, the weather is dramatically different in Panama City, Florida, than New Orleans.

“Winds will be much lighter west of Alberto’s track, and drier air being pulled into the storm will keep these areas largely rain-free,” AccuWeather Senior Meteorologist Brett Anderson.

Preparing for the costliest weather disaster in the US: How to stay safe before, during and after a flood
6 ways to prepare now for hurricanes
How to avoid the potentially deadly grip of a rip current
What you should do if you get stuck driving in floodwaters

Memorial Day is no worse than a typical summer day in New Orleans with a spotty shower or thunderstorm.

Downpours to spoil Memorial Day across more of the Southeast

While the worst of Alberto will focus on the upper Gulf Coast, downpours will continue to ruin outdoor holiday plans from the Florida Peninsula to the Carolinas this Memorial Day.

Anyone spending the holiday in Miami, Tampa and Jacksonville, Florida; Atlanta; Columbia and Myrtle Beach, South Carolina; and Wilmington, Charlotte and Raleigh, North Carolina; should remain vigilant of local flash flooding and the risk for lightning strikes.

As soon as thunder is heard, those outdoors should move inside. The danger of being struck by lightning is then present.

Areas where the ground has already been left saturated from recent downpours will be most susceptible to flooding. 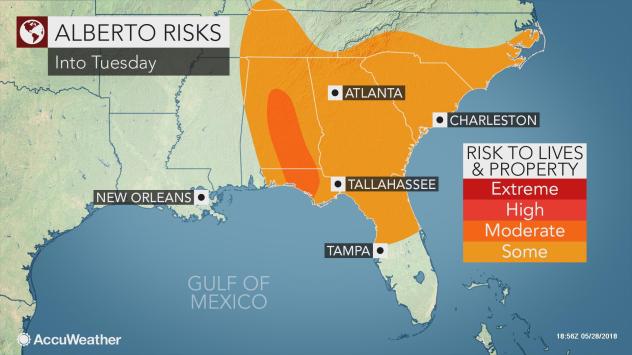 There is also the risk for isolated tornadoes east of Alberto's track in the Deep South. A few thunderstorms can also kick up strong winds.

The danger of rip currents may also plague swimmers at the Atlantic Ocean beaches of the Southeast into at least Tuesday. There will also be coastal flooding at high tide into Monday night from Georgia to North Carolina.

With Alberto starting the 2018 Atlantic hurricane season early, now is a good time for all residents in hurricane-prone areas to review preparedness tips.