2018 Atlantic hurricane outlook: How active will the season be following Alberto?

In the wake of Alberto, many may be wondering if early-season development translates into an active Atlantic hurricane season.

Subtropical Storm Alberto formed east of Mexico's Yucatan Peninsula on Friday, May 25. Alberto moved onshore over the Florida Panhandle on Memorial Day, May 28.

"There can be another storm or two that forms June into July," AccuWeather Hurricane Expert Dan Kottlowski said. "However, you have to wait until August and September for the heart of hurricane season and the greatest threat for major hurricanes."

Sept. 4 is typically when the first major hurricane takes shape in the Atlantic Basin.

"The information we are looking at would suggest a near-normal season," Kottlowski said, "but we have to wait to see how the water in the main development region warms." 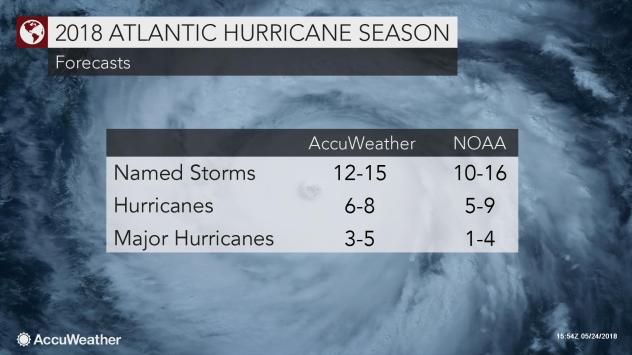 The main development region of the Atlantic Basin spans the Caribbean Sea and the tropical Atlantic and accounts for where 85 percent of all tropical storms form.

"If water temperatures do rebound, then the number of tropical storms and hurricanes will be on the upper end of our predicted range and slightly above normal," he added.

Kottlowski and the team of long-range and tropical meteorologists at AccuWeather are anticipating a total of 12-15 tropical storms, out of which six to eight can become hurricanes and three to five major hurricanes.

These numbers are fairly similar to the official prediction by NOAA, which was released on Thursday, May 24.

"NOAA's forecasters predict a 70 percent likelihood of 10 to 16 named storms (winds of 39 mph or high), of which 5 to 9 could become hurricanes (winds of 74 mph or higher), including 1 to 4 major hurricanes," the report stated.

An average season in the Atlantic Basin, which officially runs from June 1 to Nov. 30, produces 12 named storms, six hurricanes and three major hurricanes. A Category 3 hurricane or stronger is classified as a major hurricane.

The climate pattern of El Niño may also have an influence of the end result of the season. El Niño occurs when ocean water temperatures rise above normal across the central and eastern Pacific, near the equator.

El Niño generally translates to fewer storms and few opportunities for rainfall in the tropical Atlantic.

"If El Niño comes on sooner than late October, that can promote more episodes of wind shear," Kottlowski said. "That would, in turn, lead to a more average or below-normal season."

Wind shear is the changing of speed and direction of winds at different layers of the atmosphere. Strong wind shear can shred apart mature tropical storms or hurricanes.

“This season may not [bring] as many impacts [as the devastating 2017 hurricane season], but I’m almost afraid to tell people this because it only takes one big storm to hit you to cause massive damage,” Kottlowski said.

“We saw that from Harvey, Irma and Maria last year. If all we had was just another Irma or Harvey, that would be more than enough to cause catastrophic damage for any coastal community.”

Even in areas not being threatened by this weekend's tropical threat, now is the time for all residents in hurricane-prone areas to review preparedness tips. 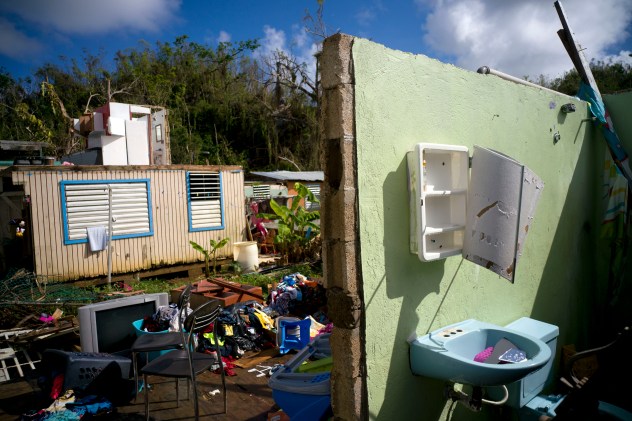 In this Oct. 14, 2017 file photo, what was once the home Arden Dragoni and his family lies in ruins after the passing of Hurricane Maria in Toa Baja, Puerto Rico. The Dragoni family lost everything on Sept. 20: clothes, household goods, and an old car, as well as the family's source of income: Arden Dragoni's construction work. (AP Photo/Ramon Espinosa, File)

“You should have a hurricane plan in action. In other words: If you had to evacuate, what would you take with you? And if you were staying home, how would you deal with a storm that may knock your power out, may knock your water service out,” Kottlowski said.

“You want to prepare for the worst case scenario - that’s called having a hurricane plan. And the government and local officials do have guidelines on how to create such a plan depending on where you live.”