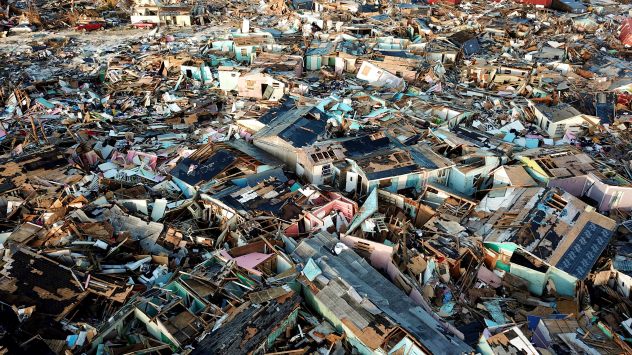 Homes lay in ruins one week after Hurricane Dorian hit The Mudd neighborhood, in the Marsh Harbor area of Abaco, Bahamas, Monday, Sept. 9, 2019.

The 2019 Atlantic hurricane season is winding down as November nears, though it is certainly not over, as those in the South watching Tropical Storm Nestor in the Gulf of Mexico heading to Florida can attest.

Tropical storm warnings are in effect for portions of the northern Gulf coast of the United States, from the Mississippi-Alabama state border to Yankeetown, Florida.

“There could still be one more named storm the rest of this season, in addition to the one in the Gulf of Mexico,” said AccuWeather Hurricane Expert Dan Kottlowski.

AccuWeather estimates the total damage and economic loss caused by named storms in 2019 to be $22 billion in the United States and an additional $5 billion in the Bahamas, according to AccuWeather Founder and CEO Dr. Joel N. Myers, based on an analysis incorporating independent methods to evaluate all direct and indirect impacts of the storms based on a variety of sources.

AccuWeather’s estimate includes damage to homes and businesses, as well as their contents and cars, as well as job and wage losses, farm and crop losses, storm surge to coastal areas, contamination of drinking water wells, infrastructure damage, auxiliary business losses and the long-term impact from flooding, in addition to the lingering health effects resulting from flooding and the disease caused by standing water.

Hurricane Dorian is estimated to account for a significant part of the 2019 total. In the days before the storm, AccuWeather predicted Hurricane Dorian would cause $8-9 billion in total damage and economic loss, with $5 billion of that total in the Bahamas. Post-storm estimates by the New York Post and insurer Aon put the total damage and economic loss at $8.28 billion.

The 2019 season is estimated to be less costly than the 2018 and 2017 seasons, which included Hurricanes Florence and Michael in 2018 and Hurricanes Harvey, Maria and Irma in 2017, among others. Each of those hurricanes caused more estimated total damage and economic loss than the 2019 total.

AccuWeather meteorologists accurately called for a total of 12 to 14 named systems for 2019, which includes both tropical storms and hurricanes for the Atlantic basin through the end of the year. Of the 12-14 named systems, AccuWeather predicted five to seven of those storms to become hurricanes and two to four to become major hurricanes.

AccuWeather also accurately forecast two to four Atlantic storms to hit the U.S.; there have been three so far. The National Oceanic and Atmospheric Administration (NOAA) predicted 10-17 named storms with five to nine hurricanes and two to four major hurricanes for 2019.

Atlantic U.S. landfalling hurricanes historically are most common in September, with 44 Atlantic landfalling hurricanes hitting the continental U.S. since 1950, according to AccuWeather research based on NOAA data, which does not include the 2019 season. August is the second most active month (27) and October is third (18). The Atlantic hurricane season lasts from June 1 through Nov. 30, though there have been storms outside of those dates on rare occasions.