When it comes to hurricanes, powerful winds aren’t the only things circulating. Here are five of the many potentially deadly misconceptions swirling around tropical cyclones.  ​

Misconceptions circulating around tropical cyclones during hurricane season are nothing new.

The rumor mill swirled so viciously around 2017’s Hurricane Irma that the Federal Emergency Management Agency (FEMA) had to set the record straight about the plethora of false reports.

The powerful storm evoked the idea that there is such a thing as a Category 6 hurricane.

In fact, the Saffir-Simpson Hurricane Wind Scale classification does not exceed Category 5, no matter how strong a storm’s winds become. 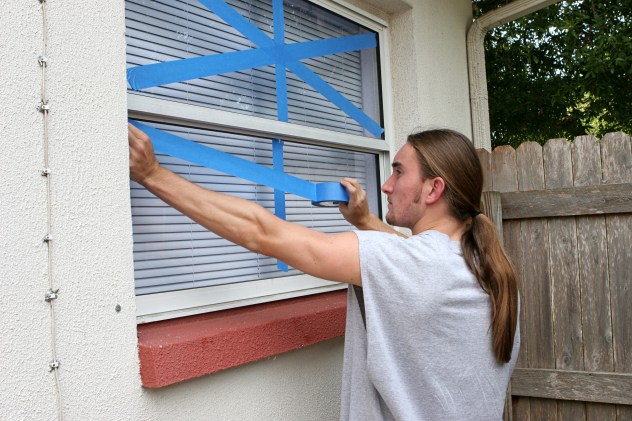 Some of the many other widely accepted hurricane myths can prove to be dangerous.

“Believing common disaster myths can be anything from harmless to potentially causing significant challenges in terms of injuries or damages,” said Amber Silver, assistant professor at the University at Albany’s College of Emergency Preparedness, Homeland Security and Cybersecurity.

“Ultimately, misinformation management is key, so it’s an appreciation of how it is we can communicate good information to aid in decision making,” Silver said.

Below are five common beliefs surrounding hurricane preparations that have proven to be false.

Myth 1: Taping windows will prevent hurricane-force winds from shattering them.

Fifty-four percent of Americans believe that placing tape over their homes' windows will protect the glass from breaking, according to the Federal Alliance for Safe Homes.

“The bottom line is that, when it comes to glass, tape is not the answer,” said Tommy Patterson, director of product development and technical services for Glass Doctor, a glass maintenance and installation company.

“That whole pane is going to come out of the window frame,” he added.

Even window film sold as impact-resistant film may be an unwise option for protecting windows, because the window itself isn’t designed to withstand a hurricane, Patterson said. Experts consider storm shutters or plywood that covers the entire window to be safer choices.

Myth 2: Storing your valuables in a dishwasher will guard them from floodwater damage.

The idea behind this popular myth is that because a dishwasher is great at keeping water from escaping, it could also help prevent floodwaters from rushing inside.

Despite being touted as a handy tip by a number of social media users and media outlets, the fact checkers at Snopes.com believe this so-called hurricane hack could potentially ruin your belongings.

If your home can get flooded, then so can your dishwasher, according to experts.

Myth 3: A few days’ worth of important medication is all that’s needed ahead of a storm.

Minimizing the chance of running low on essential prescription medications will require some planning ahead in case pharmacies remain closed for weeks after a hurricane.

“Patients can have refills before they would be due in order to make sure that they have consistent medicine to make it through a storm,” Louissaint said.

Myth 4: Opening windows during a hurricane will stabilize pressure.

“The belief is that you need to open up windows and garage doors to equalize pressure, but it’s not correct,” Silver said.

Buildings aren’t airtight, and there are many little openings throughout a home that would make opening windows unnecessary, according to Silver.

Opening windows and garage doors while a hurricane batters your home can cause much worse wind damage than otherwise would have occurred, Silver added.

“Structurally, leaving those large openings allows for wind to come in, which means that the wind has to move forcibly and can cause a lot of damage,” she said.

Myth 5: An evacuation order was issued, but the weather looks fine. There’s no rush to leave town.

If a mandatory evacuation order is issued ahead of potential hurricane impacts, experts advise that you leave your home sooner rather than later.

Officials often strongly advise against waiting until the last minute to evacuate, which potentially puts yourself in danger as well as the emergency responders who may have to rescue you during and after the storm.

During Hurricane Sandy in 2012, it was estimated that hundreds of stranded residents who chose not to evacuate called for help during the height of the storm.