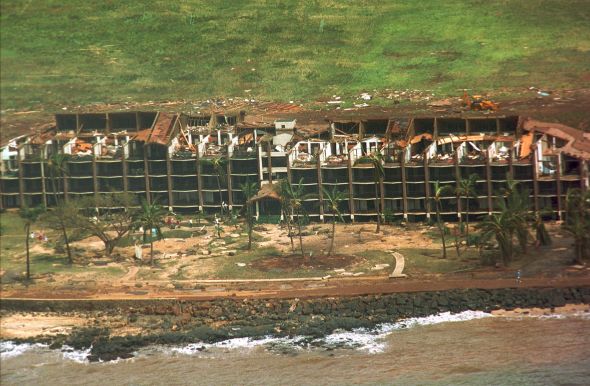 This is an aerial view of a beachfront resort on Poipu Beach on the island of Kauai Saturday Sept. 13, 1992 after suffering damage brought on by Hurricane Iniki. (AP Photo/Reed Saxon)

The storm went down as the state's costliest hurricane on record.

On Sept. 11, 1992, Iniki made landfall as a Category 4 hurricane on the island of Kauai. Winds topped 145 mph during landfall.

The storm was aptly named, as Iniki means strong and piercing wind in Hawaiian.

At the time, the storm was one of the costliest hurricanes to strike American soil, causing an estimated $1.8 billion in damage.

Nearly 1,500 homes were destroyed and another 5,000 sustained major damage on Kauai. A total of 14,350 homes were affected, according to the Red Cross.

The National Weather Service said wind was the largest factor, but a number of buildings along the coast suffered nearly total destruction due to surf damage. 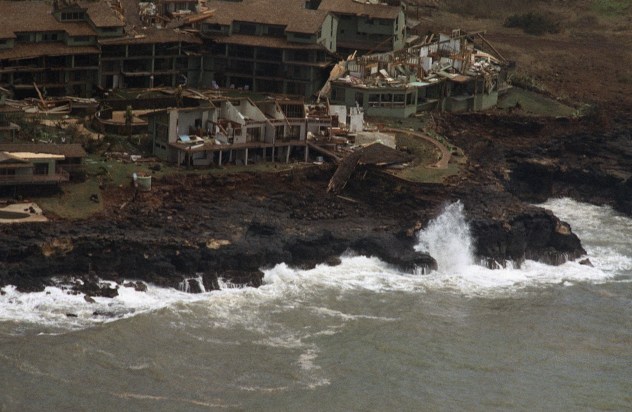 Fifty percent of Kauai's power lines were destroyed, creating havoc on the island. Even four weeks after landfall, 20 percent of the island was still without power.

The hurricane famously interrupted production of the original Jurassic Park movie. Steven Spielberg, the film's director, was forced to alter the movie's production schedule and he eventually included footage from the storm in the movie.

While Oahu was not hit as hard, several structures sustained significant damage, according to the NWS.

The hurricane formed during an El Niño year, when waters were warmer than normal in the equatorial Pacific Ocean.

Evacuation checklist: How to get your family out safely in the face of an imminent disaster
Harvey vs. Katrina: How do these monster storms compare?
Why you should evacuate ahead of a hurricane

Ahead of landfall, sirens were activated across Kauai, leading residents to rush into action. According to a U.S. Department of Commerce storm report, managers and other emergency personnel ensured people took the warnings seriously and made it to designated shelters.

Apartment managers also took on responsibility of spreading the word.

"One manager worked so long in getting his people out that, when the storm hit, it was too late for him to evacuate. He rode it out in his interior bathroom watching the roof and walls of his home blow away," the report states.