For the first time in the South Korea's history, the Winter Olympics will be held in the country as the world’s top winter sport athletes flock to the mountainous city of PyeongChang.

The first competitions for the 23rd winter games officially begin Wednesday, Feb. 7, but the opening ceremonies are scheduled for Friday, Feb. 9, at the open-air PyeongChang Olympic Stadium. 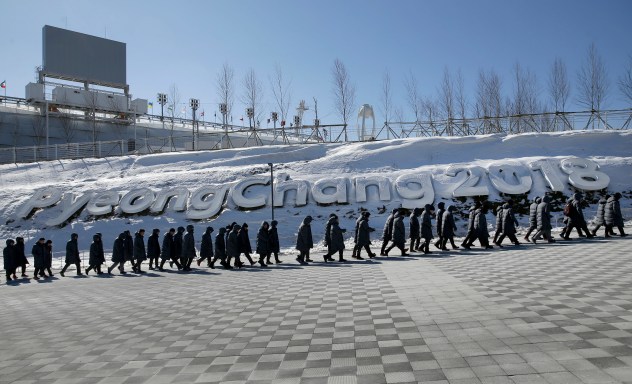 Workers walk up a ramp at the Pyeongchang Olympic Plaza as preparations continue for the 2018 Winter Olympics in Pyeongchang, South Korea, Monday, Feb. 5, 2018. (AP Photo/Charlie Riedel)

After a high temperature of 1 degrees Celsius (33 F) during the day, a temperature of 0 C (32 F) is expected at the start of the opening ceremony, according to AccuWeather Senior Meteorologist Eric Leister.

It will be a mostly cloudy evening, although a few snow flurries can’t be ruled out, Leister added.

The opening ceremonies are taking place at the open-air PyeongChang Olympic Stadium. To help protect spectators from the harsh cold and strong winds during the games, event organizers have equipped the stadium with wind shields.

PyeongChang is considered the coldest city at its latitude, according to AccuWeather Meteorologist SungHyun Do.

About 35,000 people are expected to attend the opening ceremonies. The frigid weather has been a source of concern for public safety. Officials in South Korea have arranged to provide each spectator at the opening ceremonies with a small blanket, rain coats and heating pads to help them stay warm.

While this is the first time South Korea has hosted the winter games, the country previously hosted the Summer Olympics in 1988 in Seoul.

During the course of the opening ceremonies, each participating country and its athletes will march around the stadium while one athlete will bear responsibility for holding the specific country's flag. The event will also mark the lighting of the Olympic torch, which will stay lit until the closing ceremonies on Feb. 25.