In addition to the warmth, a storm will infiltrate the region and spread rain along with some snow and ice in higher elevations.

A number of record highs were set across the northeastern U.S. over the weekend as a surge of springlike warmth made it feel like anything but the middle of January.

A total of 61 locations across the Ohio Valley and Northeast set new temperature records on Saturday, according to the National Weather Service (NWS). Temperatures soared 15-35 degrees above normal across the region.

Saturday was an incredibly warm day for January across the Eastern US. Many areas broke or tied their record high temperature for January 11th - a total of 61 locations. pic.twitter.com/HWevIQ1kIv

Some high temperature records that were recorded as far back as the late 1800s have been toppled including in Erie, Pennsylvania, and Columbus, Ohio. Both cities reached a high of 71 degrees Fahrenheit, breaking their records of 66 from 1890.

New York City also reported new record highs Saturday. At Central Park, the high of 69 broke the old record of 63, while at Laguardia Airport in Queens, the temperature of 66 surpassed the previous value of 62. Both records were originally set in 1975.

Boston Logan Airport hit 70, only the third time Boston has reached 70 degrees or warmer in January since 1872 when records began, according to the NWS.

Pittsburgh broke its 130-year-old temperature record this weekend when the thermostat showed a reading of 70. Saturday's old record high in the Steel City stood at 68 from 1890.

The mild air arrived ahead of a large storm system that unleashed travel-disrupting snow and ice as well as deadly severe thunderstorms.

The storm system brought downpours and high winds to the region on Saturday night as conditions remained balmy, generally in the 60s.

The record warmth continued on Sunday for portions of the Northeast.

New York City topped out at 67 degrees on Sunday morning, beating the record of 66 from 2017.

Other areas in New York that set a new record daily high by Sunday afternoon was Central Park at 68 degrees, Newark at 69 degrees and JFK Airport at 68 degrees.

Boston topped out at 67 degrees as well on Sunday morning, beating the standing record of 63 from 1932. The city reached 74 degrees later in the day, beating the warmest January temperature ever recorded in the city of 72 set in 1950.

A high of 74 degrees in Boston is more characteristic of early June weather, rather than January.

Behind the storm, highs will be in the 40s and 50s across the mid-Atlantic and southeastern New England on Monday, which is still 10-15 degrees above average for mid-January.

How to Stay Active During Winter
Storm cancels over 1,000 flights in Chicago and triggers flooding along lakeshore
ICYMI: Australia can’t get a break from wildfires, fast-hitting winter weather causes all sorts of travel nightmares in the US

Even locations that didn't break records had temperatures above normal for January. Burlington, Vermont is one instance where a high of 59 degrees was reached on Saturday among periods of rain. 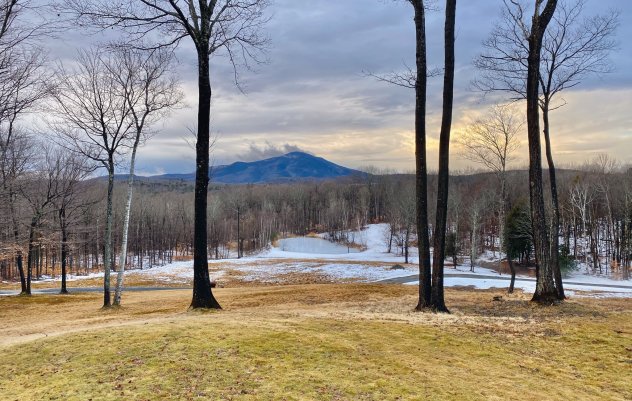 Rain, wind and temperatures of 60 degrees on the morning of Sunday, January 12, managed to melt a lot of the snowpack in Hartland, Vermont (Photo/@VermontJen).

The combination of the warmth and rain managed to melt a lot of the snow on the ground across northern New England, the area of the Northeast that has been hardest hit by winter thus far. Researchers study why power restoration after major storms can take so...