Storm cancels over 1,000 flights in Chicago and triggers flooding along lakeshore

The same storm that unleashed flooding rain, deadly tornadoes and travel-halting ice and snow over the eastern half of the country produced waves as high as 20 feet on Lake Michigan and grounded numerous flights at one of the busiest travel hubs in the U.S.

Chicago wasn't immune from the storm's impacts as winds increased Friday night into early Saturday, gusting as high as 50 mph.

On Saturday morning, the storm caused flight delays as long as four and a half hours at Chicago's O'Hare International Airport, according to FlightAware.

Delays escalated later in the day to more than six hours long, with over 1,000 cancellations from O'Hare alone.

HAPPENING NOW: More than 950 flights cancelled at O’Hare International Airport. Right now there is a ground stop at O’Hare for inbound flights due to ice. #weatherwatch #winterstorm #chicagoweather @cbschicago pic.twitter.com/B5cGE4oFp8

Such delays had a ripple effect across the country, including in cities that managed to escape effects from the storm.

In addition to impeding air travel, the severe winds affected motorists along the lakeshore as well.

Winds blowing southwestward across the southern part of Lake Michigan funneled the water over the beaches and through towns along the shore. 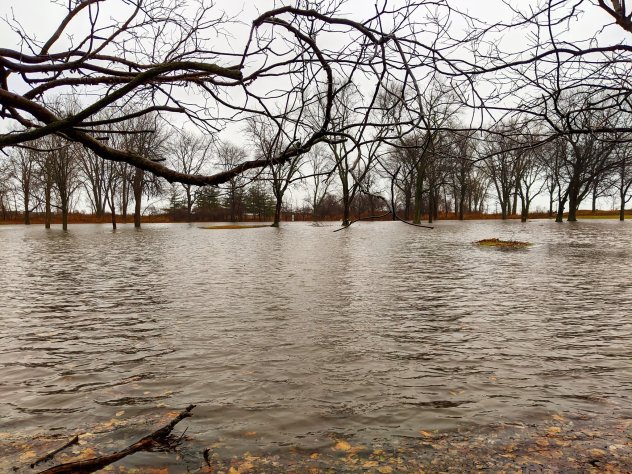 Northeasterly winds off of Lake Michigan triggered flooding in the Chicago area on Saturday, leaving one golf course underwater (Photo/@EricAllixRogers)

Locations such as Rogers Park and Evanston were reportedly underwater as intense waves moved onshore.

Radio station WBBM reported that parts of Lake Shore Drive and South Shore Drive were closed due to high water and flooding.

Much of the Lake Michigan shoreline was underwater Saturday.

The wind even produced large waves, as high 20 feet, which continued to pound the southwestern shoreline of Lake Michigan through the afternoon on Saturday.

Birchwood Ave at Lake Michigan. The rocks on the left used to rise above Jarvis Beach. The beaches are all gone now. pic.twitter.com/rk06Tztmq0

Flooding was also reported around lower Michigan on Saturday along the Interstate 94 corridor, including around Kalamazoo.

The Chicago Transit Authority reported several delays and reroutes of bus services as well as branches of the Blue, Red, Yellow and Green lines on Saturday morning, citing debris on the tracks.

In addition to the winds, periods of heavy rain spread across Illinois Friday night and Saturday. Cities such as Carbondale, Effingham and Cami all reported more than 3.5 inches of rain by midday on Saturday.

Here's a look at road conditions in Downtown Rockford and Downtown Beloit. With snow like this, it doesn't take long after plowing for conditions to become treacherous again. pic.twitter.com/M30DopbYlg

Locations away from the lake saw accumulating ice and snow, including Rockford, Illinois which reported two periods of steady freezing drizzle during the storm.

The Department of Streets and Sanitation said they had over 200 snow vehicles out to respond to the winter weather reported across Chicago.

A little over 2 inches of snow was reported at O'Hare airport on Saturday, with less amounts to the south and east.