Record highs fall in the Southwest as intense heat continues

The record-challenging temperatures and increased fire dangers in the West will continue through the first half of the week.

An abundance of excessive heat warnings have spilled across the Southwest as residents continue to bake under record heat. Most notably, the heat wave has stamped new record highs in the weather history books in Las Vegas, Nevada, and Death Valley, California.

On Friday, the temperature at Death Valley soared to 130 degrees Fahrenheit, breaking the previous daily record high of 129 set back in 1913, according to the National Weather Service (NWS). This mark fell just 4 degrees shy of the highest temperature ever measured on Earth, which was set in Death Valley on July 10, 1913. The mercury then rose to 129 and 128 on Saturday and Sunday, respectively. A normal high at this point in the year is 116. The temperature in Death Valley is averaging over 8 degrees above normal so far this month.

On Saturday, Las Vegas soared to a high of 117 and tied the city's all-time record high temperature. The first time the city ever climbed to 117 was back in July of 1942. In the nearly 80 years since that first reading, the mercury has only topped out at 117 four times, including Saturday. 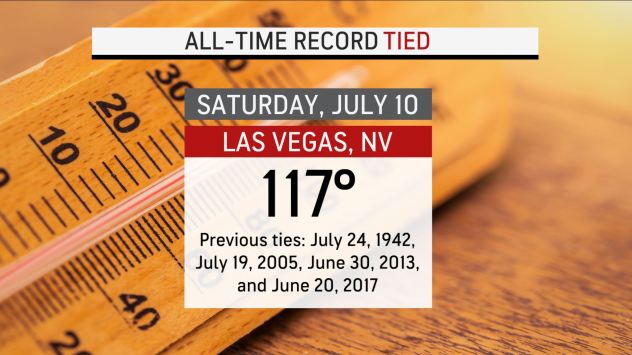 Las Vegas also set a new daily record-high temperature on Friday of 116, breaking the previous record of 113, which was set back in 1943 and tied in 2012.

The first California death this year due to West Nile Virus occurred in San Luis Obispo County last week, according to CNN. West Nile Virus is caused by mosquitos, which thrive in warmer climates and are more common in hot weather.

On Saturday, St. George, Utah, also experienced some impressive heat. According to the NWS, St. George reached 117 degrees on July 10. If this temperature is confirmed after a more thorough investigation, it would tie for the hottest day on record for the entire state. 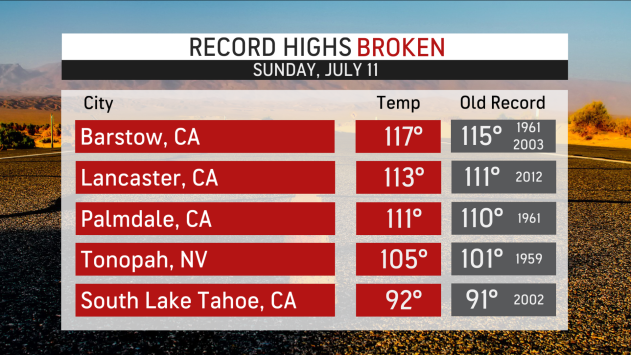 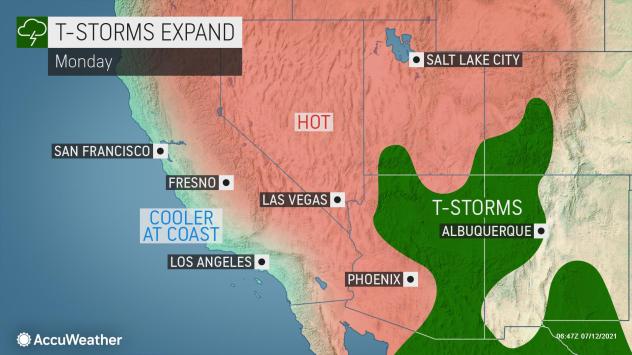 AccuWeather Senior Meteorologist Tyler Roys said that the intense heat is a result of another expansive heat dome that has set up over the region.

The setup is similar to what led to the extreme heat across the Pacific Northwest and western Canada at the end of June, when the region battled a round of its own record-breaking temperatures and devastating wildfires.

"This time, the core of the high pressure and heat has been anchored farther to the south and has allowed excessive heat to build up across the region," said AccuWeather Senior Meteorologist Adam Douty. 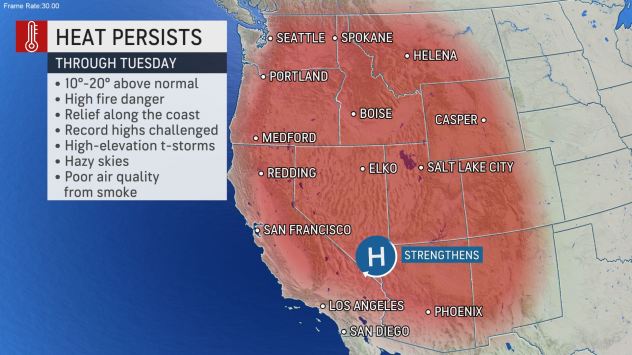 Excessive heat warnings have been in effect since the middle of last week in some locations of the Southwest.

While the peak of the heat has passed for places like Death Valley and Las Vegas, temperatures will remain 5-15 degrees above normal through much of the week.

Interior California is likely to have record-challenging temperatures through the early week, with places like Fresno and Bakersfield soaring into the upper 100s.

Experts urge residents to limit their time outside, stay hydrated and wear light-colored clothing to decrease the potential for heat-related illnesses. Heat is the most deadly weather impact annually in the United States. Extreme heat has contributed to an average of 138 fatalities every year over the past 30 years.

"Don't gamble with the dangerous conditions," said NWS of Las Vegas, stating that young children and pets should never be left unattended in vehicles. Residents are recommended to remain out of the sun, in an air-conditioned room and to check up on relatives and neighbors.

Cooling stations will be open through Monday in Clark County, Nevada, according to the city of Las Vegas, which cautioned residents about the dangers of heat exhaustion and heat stroke.

The continued hot and dry weather will keep the wildfire danger elevated in many areas that do not receive any monsoon moisture.

In southwestern Oregon, the Bootleg Fire, which has charred nearly 150,00 acres, shut off the flow of 5,500 megawatts of electricity from reaching Northern California, forcing officials there to urge residents to reduce power consumption over the weekend, according to The Associated Press (AP).

Extreme to exceptional drought conditions are plaguing much of California, Nevada and Arizona, according to the United States Drought Monitor.