Wet weather to return to the Northeast

Seasonable, dry weather will come to an end in the Northeast as a parade of storms brings wet weather to the region this week.

Millions of people across the Northeast have enjoyed stretches of dry and seasonable weather as of late, complete with low humidity and a lack of afternoon thunderstorms. But AccuWeather forecasters say a parade of storm systems will bring an end to the tranquil weather this week. This change began as the first wave of rain pushed through some areas of the Northeast on Tuesday and Tuesday night.

Rain has already soaked areas farther west over the past several days. Detroit was one location that experienced a wet start to the week, which prompted the National Weather Service to issue a flood watch for the metro area. Toward the south, from Ohio to Alabama, the rain was accompanied by stronger storms that produced torrential rainfall and locally damaging wind gusts. A report from Gadsden, Alabama, showed vehicles impeded by flood waters Tuesday, as the area was put into a flood warning through the evening hours.

Cities such as Burlington, Vermont; Buffalo, New York; and Pittsburgh all saw the stretch of nice weather end as the rain arrived on Tuesday. An infusion of moisture from the Gulf of Mexico and the Atlantic Ocean supplied the fuel for drenching thunderstorms to be embedded within a broader swath of rain.

Cities near and east of the Interstate-95 corridor were spared most of Tuesday's daytime rain, but some places in western Pennsylvania received nearly an inch of rain. By Tuesday night, rain began to sweep across much of the Northeast. Rain was generally lighter in nature east of the I-95 corridor from Philadelphia to New York City, but steady rain fell across much of New England.

The atmosphere will quickly reload and unleash another round of soaking rain late Wednesday, forecasters say.

"By late Wednesday a front is expected to stall, allowing a wave of low pressure to form along it and track up the coast," AccuWeather Senior Meteorologist Carl Babinski explained.

This will set the stage for another wave of heavy rain to fall across the Northeast Wednesday night into Thursday, with the heaviest rain on Thursday predicted to fall mainly in New England.

"An area from the mid-Atlantic up through New England could get 1 to 2 inches of rain through Thursday alone. That much rain could be enough to lead to flooding problems," Babinski said. 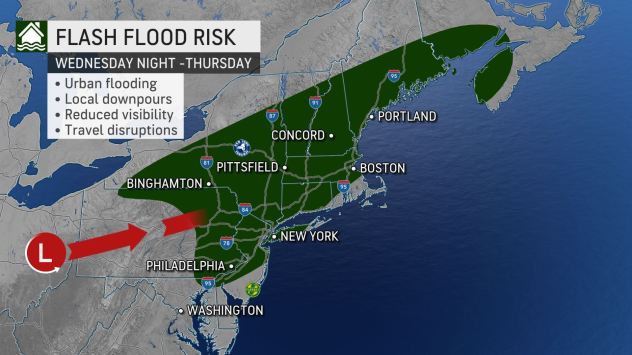 The threat of flooding may be highest in major cities and other urban locations. Unlike rural areas, most of the ground is covered in paved surfaces that cannot soak in water. This leads to additional runoff, which can enhance the severity of any flooding that occurs.

Commuters should expect major travel delays Thursday morning in New York City and both Thursday morning and midday in Boston as the storm rolls northeastward. There is the potential for some roads to be flooded in low-lying urban areas that drain poorly or that take on water in heavy rain situations.

However, localized flooding is also possible outside of the cities, especially in low-lying and historically flood-prone areas.

Many areas on the East Coast have also had abnormally high rainfall in recent weeks. Washington D.C., received 161% of its normal rainfall in May, while New York City received 114%. With the ground already saturated, it will take less rainfall to lead to flooding issues. 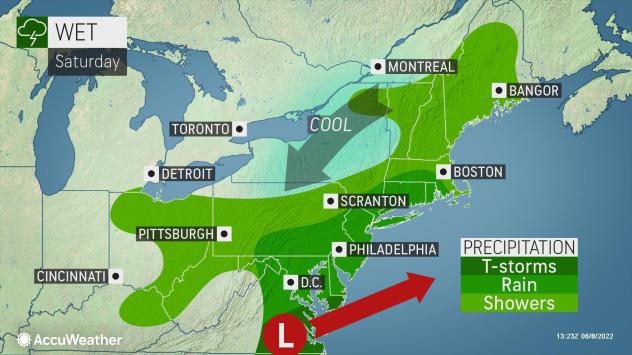 While most of the East Coast may have a break from the rain on Friday, the next system will arrive just in time for the start of the weekend.

Widespread rain on Saturday could disrupt outdoor plans such as parades, ballgames, cookouts and yard work. There are likely to be a few breaks in the wet weather throughout the day, but it will likely be raining more often than not throughout Saturday.

Now that Alex is all gone, when might the next tropical storm develop?

Winterlike scene develops in Germany, despite temps in the 70s