The western United States is experiencing a historic heat wave, but it's not the only part of globe sweltering under record-challenging warmth. The heat in parts of Europe is forecast to reach levels not seen since 2019.

A large area of high pressure that began over western Europe earlier in the week will gradually expand eastward through the end of the week and into the weekend.

As this feature builds across the continent it will cause temperatures to climb about 10-20 degrees Fahrenheit (5-11 degrees Celsius) above normal.

"While thunderstorms have brought an end to the summertime heat across much of western Europe, the hot weather will continue across portions of central and eastern Europe this weekend and even into early next week," said AccuWeather Meteorologist Tony Zartman. 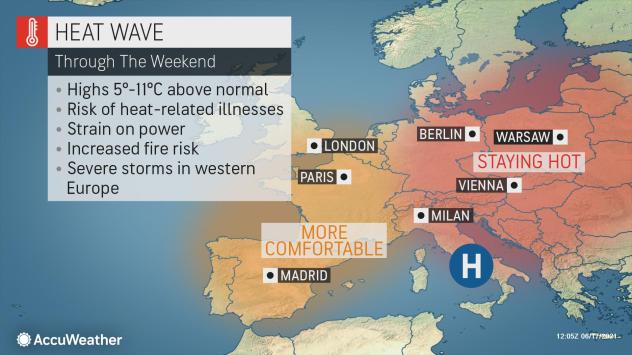 Temperatures climbed to similar levels in France, Spain and Portugal on Wednesday. In Paris, the high reached 91 F (33 C).

On Thursday, a severe thunderstorm swept through Paris which led to a 66 mph (107 km/h) wind gust at the Eiffel Tower. The storm also dropped the temperature about 32 F (20 C) in 15 minutes.

Paris hasn't recorded a 90-degree F (32-degree C) day since late last June. For many other cities, including Warsaw, the last time they recorded highs of 90 F (32 C) or higher was in late June 2019.

While the worst of the heat has passed for western Europe, the core of summerlike warmth will continue across central Europe and expand into eastern Europe through the weekend.

In Warsaw, afternoon temperatures are forecast to trend higher through the weekend and may reach 90 F (32 C), almost 20 degrees F (11 degrees C) above normal for mid-June.

"This heat wave will likely be record-setting for locations that reach 90 F (32 C) since it is happening so early in the month. Previous heat waves have been recorded during late June," stated AccuWeather Senior Meteorologist Tyler Roys.

Berlin may even set a record number of days above 90 degrees (32 degrees C). After topping that benchmark on Thursday afternoon, temperatures are forecast to return to that level or higher through at least Sunday. Normal highs are in the low 70s F (22-23 C) this time of year. 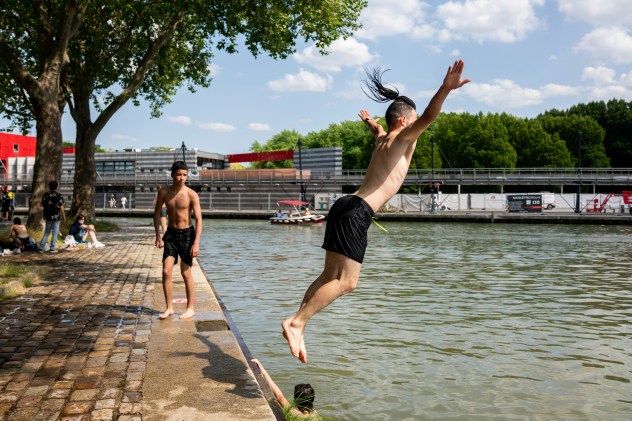 AccuWeather RealFeel® Temperatures will range from 95-105 F (35-41 C) across the regions impacted by the heat.

Persistent heat and a lack of air conditioning across the region can increase the risk for heat-related illnesses, especially for those that are sensitive to the heat or do not have access to air conditioning.

Volcano vs. typhoon: Island hit by double disasters in one day
Advocates push for technology that prevents hot car deaths
A volcano that created ‘one of the best climates in the world’

High temperatures and dry conditions across the region can lead to an increased fire risk, especially in areas that have been dry in recent weeks. Heat will also put a strain on power grids where businesses and homes run air conditioners to try to keep cool, AccuWeather Meteorologist Alyssa Smithmyer warned.

Meanwhile, areas of rain and thunderstorms will keep temperatures down through the weekend in much of western Europe.

"Although it will not be as hot across western Europe, the downside will be that some of the thunderstorms will become severe with flooding downpours, hail and damaging wind gusts," Zartman said.

Storms are expected to erupt across Portugal and Spain on Friday as a storm system tracks across the region. These storms can then bring locally damaging thunderstorms to France on Saturday, and then to Germany by Sunday.